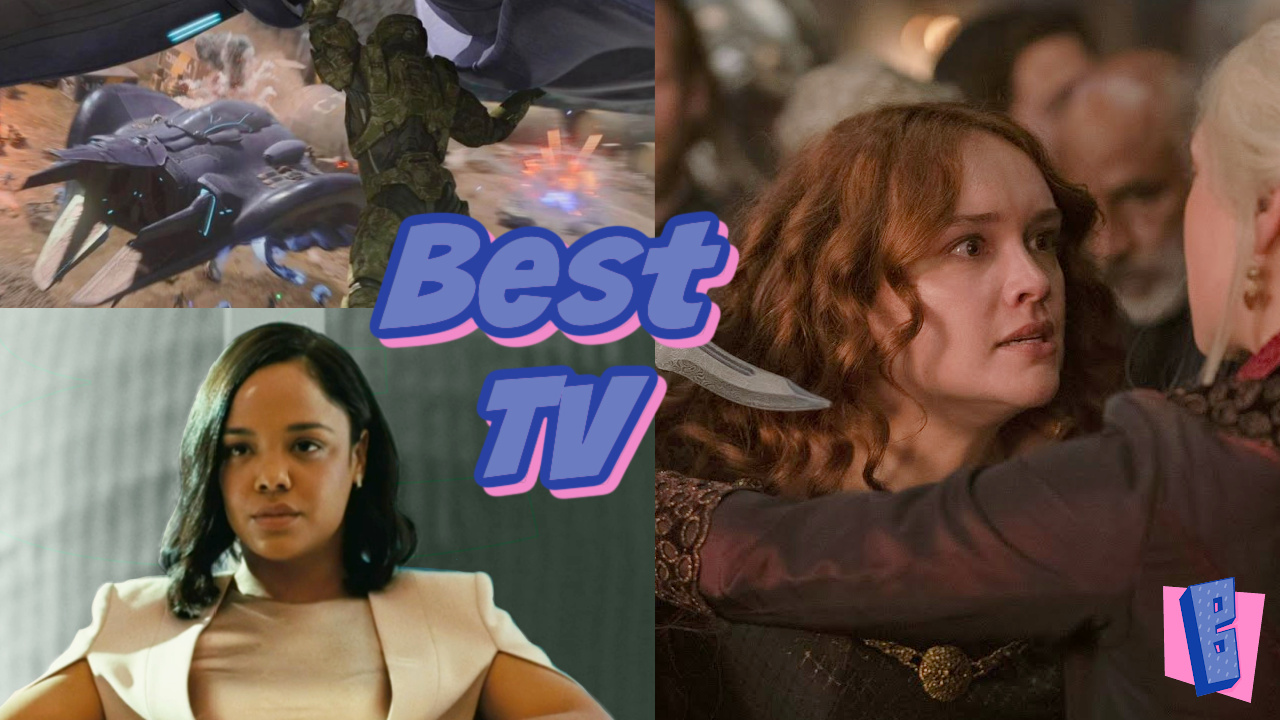 Of all the amazing television this year, these are the Ten Best of 2022. Only Murders went crazy, several shows had great spinoffs, and Westworld came to an end. Which TV show was your favorite?

Robots killing humans. Humans killing aliens. Dragons killing everyone. Television was incredible this year, including several true stories made even better with fiction. These are the ten Best of 2022, television that inspires, excites and scares you to the core.

Best of 2022 Television on BuzzChomp

#1 – Watch: Only Murders In The Building Season 2

Only Murders In The Building is freaking fantastic. Mabel figures it all out and then her, Oliver, and Charles bring everyone together to reveal the murderer. Except they’re wrong, because the real mystery is wilder than fiction. It’s a murder reveal party, which does confuse a few people.

The Dropout is all true story and half fiction, done to perfection. Elizabeth Holmes learned how to white man everyone. After every episode, I say to myself how did Elizabeth keep convincing these powerful men that her business is legit? She white maned them.

Our king sacrificed his queen for a male heir, only to watch both die. House of the Dragon ties you up in knots, then jumps forward in time to spit you out. Now our eldest daughter must step up and face off with her uncle as rightful heir to the Iron Throne. I’m getting major Succession vibes in a Game of Thrones wrapper, but its still awesome. House of the Dragon season 1 has proven itself bloody, gut wrenching, heart warming, and progressive. They are still knights with swords and dragons, though.

The Offer paints us a beautiful mosaic of what it was like to make The Godfather movie. After each episode we break down fact or fiction, because the show is pretty wild. I loved this show so much. The acting is great, the story is super interesting. I like how they stayed pretty true to how it went down, but they did of course change things.

The Handmaid’s Tale Season 5 began with a gut punch. Serena nearly gets her perfect revenge upon June. This is the full aftermath of what June and those ladies did to Fred. June has to deal with what she did, how she liked it, and ultimately her next move. Her destructive actions 100% provoked Serena. These ladies are about to go to all out war!

We have multiple dead bodies to kick off The White Lotus season 2, now in Sicily. Tanya’s back at the new resort with her husband Greg and Tanya’s gonna kill Greg! Greg is dead. He didn’t drown, he gets murdered… or not? Tanya’s assistant spots Greg with those hookers and everything goes wrong from there. Stab stab stab. Harper is representing clients who are suing Cameron, I’m calling it now. Cameron strips down to his butt naked body for Harper. He’s also gonna get with them hookers. All of these cheating husbands are gonna get the slashy slashy from their not so thrilled wives. The White Lotus is about blood spilling in the water.

Bouncing between the present day and ancient healing chamber memories is what The Book of Boba Fett is all about. This dude is half dead! Boba Fett is constantly in a healing chamber, no matter how hurt he gets. A war is coming and Boba Fett must make unlikely allies to survive.

What an epic beginning! The Rings of Power season 1 begins with peace that was never meant to be. Galadriel fights for revenge, as Sauron and his orcs slowly emerge from the depths of Middle Earth. The forge must be built to construct the rings for a chance at victory, but that is no easy task. Will our meteor man prove the key to victory over evil? Only if Nori can tame the beast.

There’s nothing better than perfect sci-fi cheese with a ton of action, a wild story, and just enough funny lines. This is Halo the series. It managed to recreate the video game within the first five minutes, which was both a good thing and a super cheesy thing. Halo the series has a very lengthy, drawn out story that you don’t quite understand in the beginning. But its deep and layered, with lots of changes from the video games.

We totally hit the reset button in the Westworld season 4 finale, as well as the annihilation button! Dolores was indeed in a prison. The real world did indeed collapse. Dolores left her prison, then was put back into the sublime. Now she’s creating a new world in the sublime. Dolores took it back to the wild west with a new game, but then Westworld ended for good.