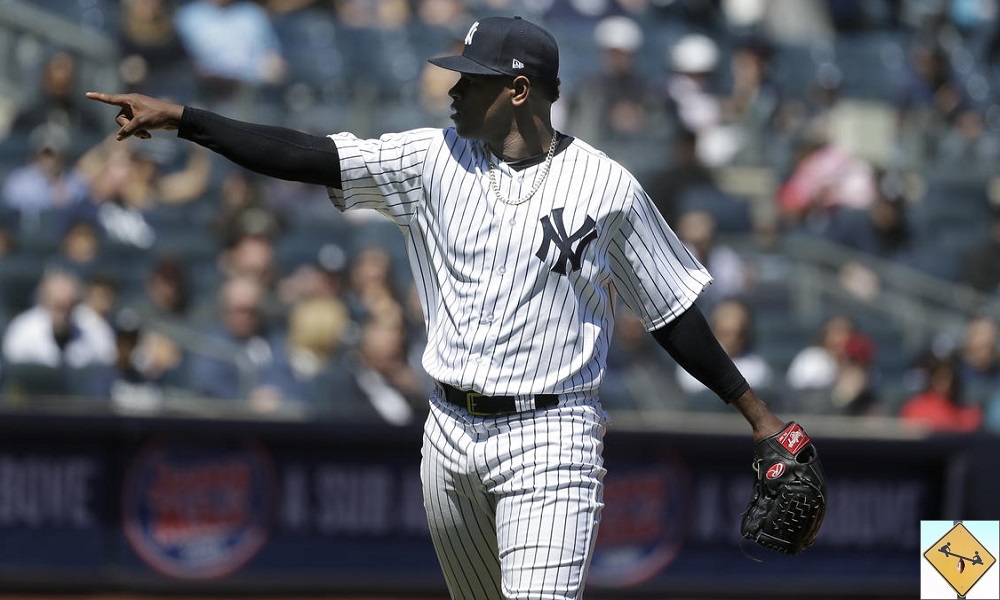 We’re not bitter, just ready for the New York Yankees to take down Boston. What’s New York’s outlook for 2019? Currently 1a until these offseason moves are made.

After Red Sox “fans” threw cans of beer at the players, their families, and the World Series trophy, you can’t help but wonder if the city of Boston ever deserves another World Series trophy. And after manager Alex Cora laughed off the fact that his daughter was hit by rabid drunks throwing shit, you can’t help but wonder if the Red Sox team doesn’t deserve to win ever again either.

…What? No, I’m not a bitter New York Yankees fan, you are!

For the 2019 MLB season, Boston is marked as an early co-favorite, along with the Houston Astros. Both teams were given 6-1 odds of winning next year’s title. A lot has to be determined this offseason, including where Manny Machado and Bryce Harper will end up, but that’s a good starting point. The New York Yankees and Los Angeles Dodgers follow close behind the leaders with 7-1 odds. All four teams should be in great shape next year regardless of who adds what big bat or impact arm.

ALSO ON BUZZCHOMP: How Much Credit Does Alex Cora Deserve for Boston’s Championship?

How do you feel about the Yankees at this early stage? They have a young roster with incredible upside, but they also seem to have a few more questions than these other top contenders. What will happen at first base? Can Miguel Andujar stick at third? Who will play shortstop with Didi Gregorius facing Tommy John surgery? Who will pitch after Luis Severino and Masahiro Tanaka?

I get the feeling that 1B will be an open competition between Greg Bird, Luke Voit, and a free agent brought in. Andujar, I think, will stay at third, but how long can the team leave him there if he doesn’t improve? Last year, by one defensive measure, he was the single worst defender in the sport by a comfortable margin. Defensive metrics are spotty still to this day, but his baseline performance at the position is not good regardless. I think the most likely outcome is New York adds an infielder who can play 2B or SS daily (with Gleyber Torres filling the other spot in Gregorius’ absence), but who can fill in at 3B as well. That way the entire infield is fluid, and Andujar can be moved off the spot entirely if Didi returns. Of course, teaching him a corner outfield during the season will be a tall task. Maybe it means he becomes the everyday DH, which itself isn’t ideal.

As for the starting rotation, there are numerous spots still to claim. The young guys may be given one or two, but the Yankees will surely sign a couple of pitchers to throw 160+ innings apiece. That means we could see as many as three new starting pitchers on the opening day roster. The heights of the rotation, though, will still come down to what type of Severino we get. Is it the Severino from 2017 and the first half of 2018? That guy legitimately looked like one of the five best pitchers in the game. Or will we get the Severino from 2016 and the second half of last season? That guy was unplayable; below replacement-level; literally worth fewer wins than a replacement call-up from Triple-A according to WAR.

Among the guys who could get chances to start include Chance Adams, Domingo German, Jonathan Loaisiga, Jordan Montgomery, and Justus Sheffield. All five of them are 26 or younger and already on the team’s 40-man roster. That’s what makes this New York Yankees squad fun. Oh, and we still have Aaron Judge, Giancarlo Stanton, and Gary Sanchez! And, no, I’m not worried about Sanchez being bad again. He had a .197 batting average on balls in play in 2018. That was the second-worst (second-unluckiest?) mark in the Majors among anyone with at least 350 plate appearances. That unsustainable and fluky figure was more than 100 points lower than each of his previous two seasons. He’ll be fine.

It was the perfect season for Boston, as injuries all fell their way and their star players all exceeded expectations on the field. Even rookie manager Alex Cora failed to make a single noticeable mistake, but success like this is hardly sustainable. The Red Sox will be good again in 2019, but our New York Yankees are poised to steal the crown.

I feel great about the Yankees in 2019, because of their young core. Two of their primary young stars dealt with significant injuries last season, yet new players emerged in the process. Next year, with all of them playing together from day one, there is no stopping this Yankees’ offense. My only concerns are with the pitching staff.

Much like this past season, there are currently questions in the starting rotation. New York’s bullpen is solidified pretty well, but I can guarantee that we will add at least one arm to the pen as well, during the winter months. What is unclear are the Yankees actual offseason goals. Do they focus solely on adding a premier starter to their rotation? Do the Yankees aim to keep the likes of Bryce Harper and Manny Machado away from the competition? Does this mean one ends up joining an already stacked New York lineup?

Unlike past years, I do not believe money is a factor heading towards 2019. The New York Yankees not only want to win a World Series with their incredible young team, but they want to dethrone the hated Red Sox. Will Sonny Gray materialize into a viable pitcher? It took David Price more than a full season to be an impact player for Boston. Will Aaron Boone study the moves Alex Cora made to perfection during the playoffs? Baseball is a game of subtleties and what currently separates New York from Boston are the types of things that always shift year to year. I want one more reliable starting pitcher… and maybe Bryce Harper.

Next on BuzzChomp: Top 5 Exercises for Beginners to Fitness