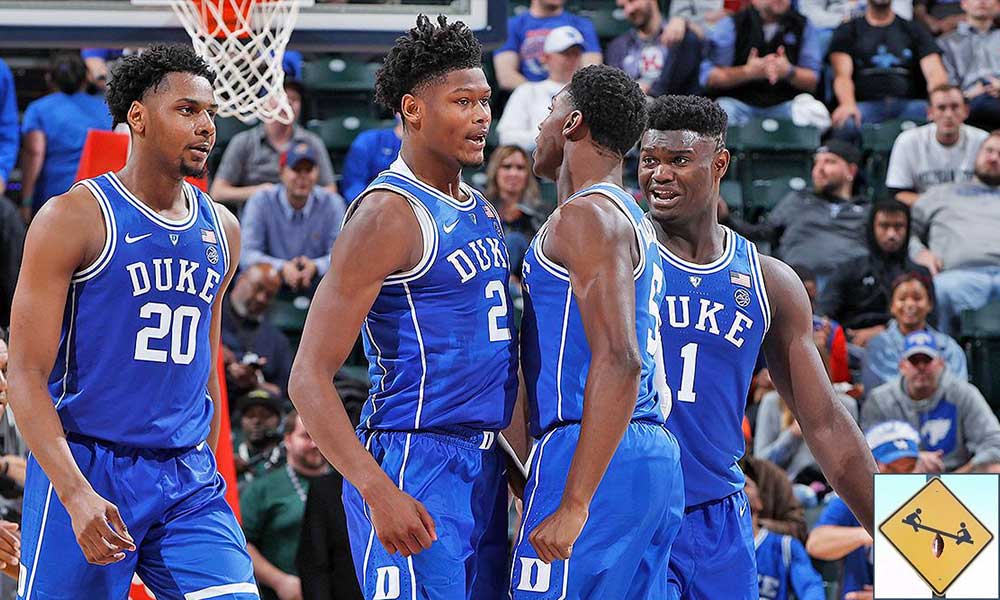 Duke basketball (4) cruised past Kentucky (2) to open the 2018-19 college basketball season, proving they are every bit the Goliath we thought. Will the top three recruits in the country lead the Blue Devils on an undefeated path into the history books? This is great for college basketball!

The 2018-19 NCAA basketball season began late last week. College basketball manages to put together a schedule that looks like an exact opposite of its football counterpart. Rather than early season games coming against marshmallow opponents, basketball hosts mini tournaments or just creates flat-out amazing matchups right from the jump. The conference season is then somewhat of a letdown until conference tournaments and the NCAA Tournament ramp excitement back up in the final month.

One of those early season matchups that dreams are made of was Duke basketball versus Kentucky. Two national title favorites opened the season against one another. This game would normally tell us nothing secret, a la the Kansas vs. Michigan State matchup that took place on the same day. Both teams are going to make the tournament, and a somewhat close finish, regardless of who wins, won’t mean anything four months from now.

This wasn’t the case with Duke’s win over UK. The Blue Devils did something else entirely. They staked their claim as the best team in the country with a starting lineup that could develop into the thing of legend.

Duke’s three freshmen phenoms were supposed to be just that. They were the top three high school recruits in the country for a reason. But they were not supposed to look like finished products from day one against the #2 team in the nation.

RJ Barrett poured in an effortless 33 points, with moves that took him around, over, and through the Kentucky defense. And he was somehow the second-most impressive Blue Devil in the game. Zion Williamson measures out at 285 pounds and had the largest vertical leap in the history of Duke basketball. Now, Duke isn’t thought of as the home of miraculous athletes. This isn’t North Carolina we’re talking about (😋), but a man at that size being able to jump that high is something worth monitoring. And Williamson put his athleticism to good use. From suffocating blocks to thunderous dunks, he stole the show and scored 28 points on just 13 field-goal attempts.

Poor Cam Reddish, the freaking third-best recruit in the nation, scored 22 points in 24 minutes in his first collegiate game, and he doesn’t have a single play that even sniffs the highlight reels of the game. Of course, he knew what he was getting into when he signed with Coach K.

Overall, Duke blew out UK by 34 points, and it never felt closer. It won the turnover battle 4-to-15 and collected 10 steals. The main worry about this team was how well it would shoot from the outside. Well, the Blue Devils hit 46.2 percent of their 26 attempts from three.

One game doesn’t make a season. It also doesn’t ruin Kentucky’s season. But it seems to indicate that Duke is a national behemoth who could run the slate up until the NCAA Tournament. This was a long way of wondering whether you like the idea of an undefeated power running through to March or whether a more open tourney field is more enjoyable come late in the year. On one hand, we have a team everyone is gunning for. On the other, anyone can win. Yet on the other, other hand, it was only one game!

The Duke Blue Devils are now everyone’s pick to win the NCAA Championship, more so than usual, and I love it! Having a single Goliath in college basketball is great for the sport, unlike many others that rely on parity. Because the college basketball season is so long, and everyone only gets excited for the NCAA tournament in earnest, having Duke basketball as this untouchable team of superstars makes a lot of the regular season actually interesting.

It was shocking for Kentucky to get run off the court by Duke to open the season, but only because we had yet to witness the power of their big three. College basketball is better when Duke basketball is a villain. Will they go undefeated? Can anyone stop them from running away with the National Championship? It’s still early, but these are legitimate questions! It’s hard to remember a season in which one team stood out as so unbelievably dominant. The ‘Fab 5’ of Michigan come to mind, and they lost the championship in legendary fashion. How Duke ended up with all three top recruits, and all three appear as good as advertised, is somewhat ridiculous. Bravo Coach K, you just made us care about the regular season for the first time in a very long time.

Why is Duke basketball only ranked 4th right now? This seems silly. Kentucky is still ahead of them, humiliating loss and all. Re-rank the teams already! [Editors Note: Duke became ranked #1 shortly after publication] As for potential matchups that can unseat our juggernaut, we must wait until late January for the first real challenge to Duke’s crown. The Blue Devils play Virginia (5) on the 19th of January. North Carolina (8) then comes to town a month later in late February. A lot can change between now and the new year, but considering how dominant Duke looked to start the year, we only have a few scheduled games outside of holiday tournaments that pose a challenge to their quest for an undefeated season.

I willingly admit that my interest in college basketball generally begins with March Madness, as the games preceding the NCAA tournament usually mean little towards who wins the championship. Yet a potential undefeated team is quite exciting, even for a casual fan like myself. Everyone will pick them to win their March Madness bracket, but that makes them a poor bet. Who can legitimately beat them? I’m excited to find out!

Next on BuzzChomp: Top 5 Exercises for Beginners to Fitness