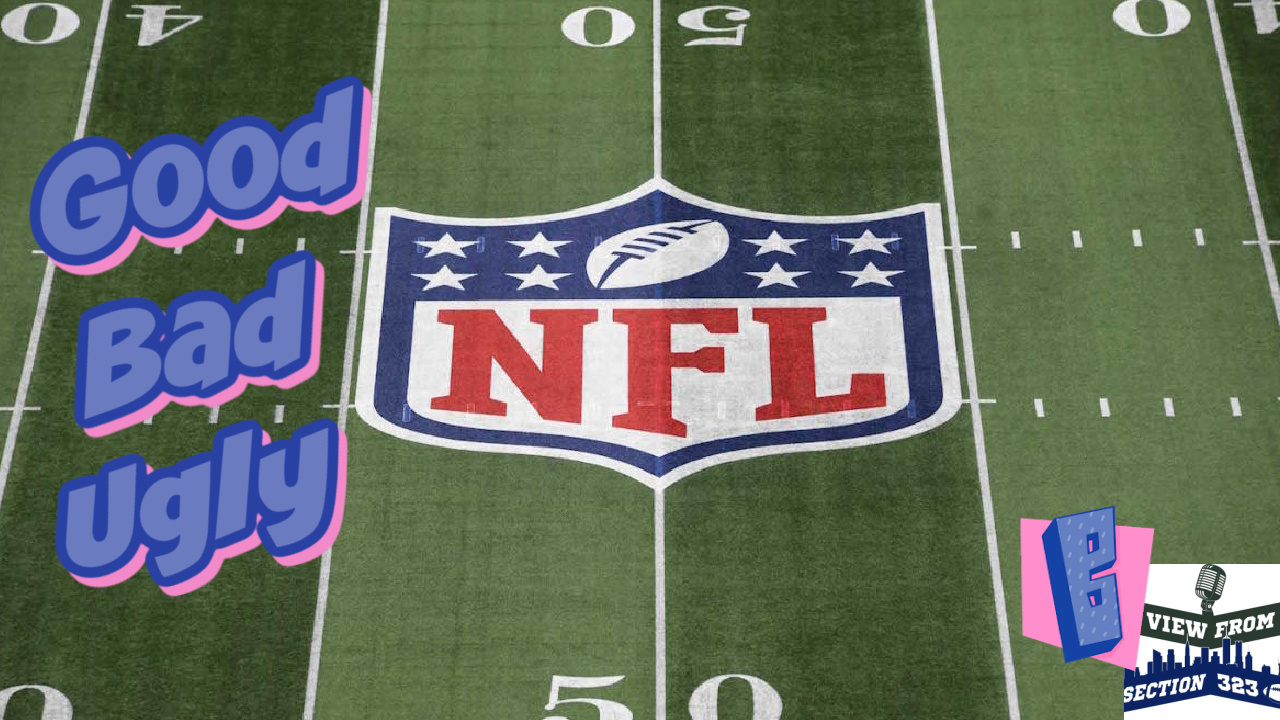 The road is rocky, but the league is sprinting towards NFL Kickoff 2020 with blissful ignorance. Rules are in place and changes are fluid, yet will any of it matter? Will there even be a season? Our good, bad, and ugly debate.

What will NFL Kickoff 2020 look like? Will it be on time and will the season be a full 16 games? Will it start, only to be put on pause or cancelled altogether? The scenarios vary from blissful ignorance to outright apocalypse and the three members of our #3ManBooth span the gamut.

More BuzzChomp: No College Football in 2020 has Major Repercussions

This a good, bad, and ugly debate with no right answers and a ton of juxtaposition. How optimistic or pessimistic are we feeling right now? NFL Kickoff 2020 should happen, may happen, or could be cancelled. Dan, Phil, and Bud go head to head on the page, as they do weekly in the #3ManBooth live NFL debate show. Comment below with your own thoughts on the upcoming season.

As we sit here in late July, there are still a lot of unknowns to get through before there’s football. Hurdles remain and hoops must be jumped through, but looking at what all of the other sports leagues have negotiated gives me hope. Baseball got contentious and the NBA and NHL precautions include “bubbles” that only work in those two sports.  The NFL still has the luxury of time to see how our three other leagues fair before NFL Kickoff 2020. Yes, its happening. Yes, it will be on time.

Training camps are set to open at the end of July and with the luxury of not having to play the preseason, teams will have more time to make sure all of their precautions are in place. The NFL is a multi-billion dollar entity, so there is no reason to think there are not people thinking about this problem hourly. They probably have a committee dedicated to how to operate everything safely, put safeguards in place, and deal with positive tests. I have already seen a new design for a face shield that will go on the helmets to help protect players. This is good news.

I’m of the belief that the 2020 NFL season will be played with all 16 games if all the other leagues that start before them do not have major issues. As I stated above, the NFL has the luxury of time. They can wait and see what the other leagues do, then adjust accordingly. The NFL can implement only the safety precautions that work and change ones that don’t. I’m not going to sit here and pretend there won’t be any players that test positive as the season is played. Yet I do believe they will be isolated incidents. If there is daily testing, as the players are trying to put in place, then it limits the exposure that will happen.

We can all agree that NFL players will have access to tests whenever they want them. Maybe they are made mandatory every day of practice and especially on game days. That means the chances of any player walking around for days infecting everyone unknowingly is next to zero. This, I believe is going to be the key piece to successfully holding an NFL season.

What about travel? Since its impossible for the NFL to have a bubble or a few host sites, the risk of playing is higher. While this is true, I also have to assume that teams are going to be well taken care of when it comes to travel. More so than usual with added amenities and cleaning procedures to and from the stadiums.

A lot can happen between now and NFL Kickoff 2020. Hopefully we get good news, but the NFL appears prepared. They have kept to their schedule every step of the way with free agency, the NFL Draft, and upcoming training camps. Aside from OTAs being cancelled, little else changed in the NFL world. Players are working out with other players on their own and doing it safely with no issues. The glass is half full for me, as long as the people making all the decisions continue to do them right.

Whether we like it or not, professional sports are happening this year. No matter how uncomfortable it makes us, NFL Kickoff 2020 is coming. College sports are a whole other can of worms that Todd and I debated earlier. But professionals are under contract and obligated to play, so long as the union feels safety protocols are adequate. Not only is the NFL season coming, but it’s going to happen on time. It’s also going to hit some major roadblocks along the way.

Hollywood is going through something similar right now. Unions have agreed with producers on safety protocols, but their implementation is nothing close to uniform or consistent. There are loopholes, blatant disregard for the safety of employees, and the consistent desire to put profits first. Will the NFL be any different? Will players go on strike because they feel unsafe at work, but are being forced to play? Thankfully the collective bargaining agreement was agreed upon prior to the current mess, or a strike would be a slam dunk bet.

Look at a player like Dak Prescott who refused to sign longterm for the Cowboys. Was that strictly about money? Did he feel disrespected that Dallas gave Zeke what he wanted? Perhaps Dak simply does not want to play in the state of Texas, which is doing a piss poor job of managing the pandemic. He’ll cash in on this bastardized season and then weigh his options in 2021. That right there is good business. Forging ahead like the NFL is doing, without properly addressing the elephant in the room is bad business.

The luxury of time is all well and good if you actually do something with it. Bubbles in the NBA and NHL will do nothing to help NFL planners. Playing professional football is not possible in a bubble, so perhaps baseball is a better barometer. MLB is a game where players never have to touch one another and the league is going so far as to ensure no two players even touch the same baseball after a single ball is in play. Fans won’t likely be in attendance and all teams are only playing their own local divisions. The AL East is playing itself and the NL East. Many players will wear masks and many more have opted not to play. Perhaps baseball is poor barometer for the NFL as well.

Also on BuzzChomp: The Final Transformation in Perry Mason

NFL Kickoff 2020 is coming, but I’m not particularly optimistic about how it will look. Can the NFL survive with zero fans in attendance and the continued monopoly of games on DirectTV Sunday Ticket? Can they allow fans in Florida, but no fans in California? That puts everyone at risk who will then be traveling out of the state. Will teams want to travel to Florida? Unlikely. I envision sideline bubbles to ensure players are isolated from everything but themselves. Smacking around on the field is fine with face masks and gloves and long pants, but keeping players on house arrest between games is going to be an impossible task. How do you remove the desire to party from a group of wealthy young adults that need to blow off steam? You simply do not.

Hi folks, welcome to reality. A new reality that is. I’ve been listening and reading about everything the NFL is going to do to play this year, but I just don’t see it. I’m joining the debate. NFL Kickoff 2020 is not happening.

The NFL has the luxury of seeing the other three main U.S. professional sports leagues try to figure this out prior to their own league starting. It won’t do any good and I feel as though things are being rushed across the board. NFL Players haven’t had the time to learn a new system. Rookies are just getting signed and haven’t been able to get into their new buildings or get acclimated to being a professional. The last time the NFL had a “delayed” start to training camps, there were tons of injuries and players complained. Nothing has changed in this regard here in 2020, except for the excuse that not playing is that much more dire and complicated.

The NFL needs to figure out how to control its players. This will be complicated because out of all the major sports, NFL players feel like they are invisible. The NBA and NHL both have a solid approach by creating “bubbles” for their players. We know its working because the positivity rate within those bubbles have been low. Both the NFL and MLB are not going in that direction. Big mistake. To Dan’s point, how can a team in Florida allow fans to enter their buildings when places like California and New York/New Jersey will not?

By allowing teams and fans to travel as they wish, it creates a lack of trust. We must trust that players, who get tested regularly, will not go out to the clubs of South Beach when they visit Miami. We have to assume at some point that one player on a team will get infected. Will all of his teammates then get it? What happens if Kansas City’s new shinny toy has to play behind an offensive line full of scrubs, because the starters are all ill with COVID? Sounds like disaster to me.

Also on BuzzChomp: Family Fun at Home Guide to Summer

My final point is economical. Players like Jamal Adams and Dak Prescott want major new contracts. How can that be possible without fans in the seats and concessions to help feed the money fire? There will need to be a larger cap to allow for more players on rosters in the event that players get sick. The quality of product on the field will suffer. Anyone remember the Jets first six games of last year when they had basically the University of New Haven’s football team playing?

NFL owners and the union will be battling over this until they can come up with something, but the it might be too little too late. Bottom line, the NFL thinks they’re invisible and invincible. They can survive anything. But they’re not and they can’t. It’s that simple, NFL Kickoff 2020 is dust in the wind. See you all in 2021 and as always, Lets go Jets. #FireGase