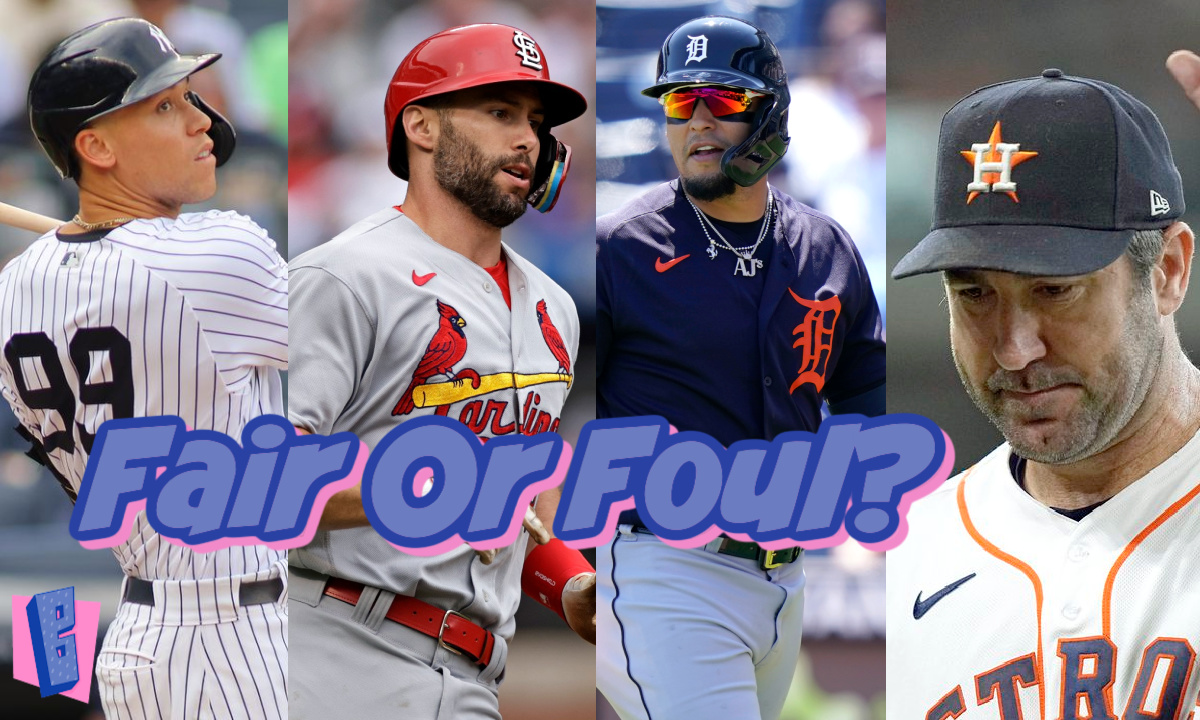 Three players are crushing it and one is worse than dirt. Are these fantasy baseball 2022 performances for real? We play FAIR or FOUL with four of the game’s biggest names.

A week removed from Memorial Day means we have passed the first threshold of the baseball season. We previously examined the standings and how… unsurprising everything looked. Maybe the final standings won’t exactly capture the same picture as presented at the end of May, but it’s going to be close. The same can’t be said of Fantasy Baseball 2022.

For individual players, the outcomes are far more vast and will certainly change. Batting averages are down across the sport, meaning even some of the best hitters have gotten off to poor starts. This is a pitcher-friendly landscape, but that doesn’t mean top pitchers are without variance too. Let’s play FAIR or FOUL with the most interesting lines for current baseball stars. A FAIR vote means we think the current stats are for real in what they represent, even if the literal rankings could change. A FOUL vote means they are fake and will definitely change.

FAIR or FOUL With Fantasy Baseball 2022

Currently the number one first baseman in fantasy; fourth in baseball in BA; fourth-most WAR among all hitters

Todd Salem – FAIR: We thought Goldschmidt was getting washed up two years ago. Turns out, we should have accounted for that whole, world-wide pandemic thing perhaps throwing some things off course. He rebounded back to an elite level in 2021 and is now one of the best players in all of baseball yet again. It looks silly, in retrospect, that we all, collectively, wrote him off two years ago as being over the hill.

Dan Salem – FOUL: I feel much the same about Goldschmidt as you do about Judge (see below). I believe he ends with an excellent season, but will cool off from his current dominance. We were certainly wrong about him being washed up, but this feels like an early season surge from an older player who likely can no longer sustain such levels of dominance. Will he be the number one first baseman at season’s end? No. Will he be in the top ten? Easily, I just don’t buy this number one performance.

Todd Salem – FOUL: Baez is one of the most fun, electric, and exciting players in the game. Or, at least, he was before he cashed in with the Detroit Tigers. Did he get his payday and call it a day or is this a case of just a really, really, deep slump that he will emerge out of? I lean toward the latter. Baez has never been a BA darling; he produces with his flash plays. If he was pressing early to live up to a new contract in a new city, he should settle in as time goes on.

Dan Salem – FAIR: As someone who suffered through his inability to perform for over a month, I am totally buying Baez’s lackluster season. He has literally shown us nothing. While it’s hard to imagine he ends the year this bad, I fully believe he remains insignificant in terms of fantasy baseball 2022 relevance. He’s on a bad team, so he can play for pride, but his teammates aren’t going to be helping him score runs or earn RBIs. This feels like a mulligan year for Baez, who will fly under the radar next year before surging back into the conversation.

Todd Salem – FOUL: Judge could always mash. He’s been an MVP contender before, but hasn’t quite reached those heights in any year since. Part of that was injury, which remains a concern, but is Judge back to being an AL MVP contender or just having a hot six weeks? I am slightly pessimistic. While I don’t think he is the best player in the game, a fully healthy Judge is certainly capable of winning an MVP. I think he slows down and, ultimately, falls out of that discussion, but he could still end with a fantastic overall season.

Dan Salem – FAIR: Aaron Judge is in a contract year, on one of the top three teams in all of baseball. He is playing to the level we all knew he was capable of. While this historic dominance is rarely maintained all season, if anyone can do it, it’s Judge. Funny enough, I do believe he gets more rest later in the year to prepare for the playoffs, but I don’t see his production dipping when he’s actually at the plate. This cools his numbers without cooling the player. Judge is the MVP.

Top-15 in the league in innings pitched, pitcher WAR, wins, and ERA among qualified tossers; number one among all qualified arms in WHIP

Todd Salem – FAIR: The pitching leaderboard is insane right now. Casual fans have probably not even heard of 75% of the top-15 arms. But among them is Verlander, whose name is so recognizable that he could be passed over for having success, it being predictable. But it bears repeating what he is actually doing in 2022.

Verlander is 39 years old. He started one game in 2020 and missed all of 2021 after needing Tommy John surgery. Despite throwing a total of six innings over the past two years, he hit the ground running in 2022, having thrown at least five innings in every start to date. Does it make sense that he completely recovered at his advanced age? No. Am I ready to say it isn’t real? No. I’m calling it FAIR.

Dan Salem – FAIR: Finally a player we agree upon. Verlander is an anomaly, maintaining his dominance well beyond when anyone thought possible. With pitching easily overshadowing hitting this season, Verlander will maintain his high level of play. The rest has rejuvenated him and its little surprise he has rebounded from surgery so smoothly. Being one of the all-time greats makes this less surprising, but his dominance is one hell of an accomplishment.