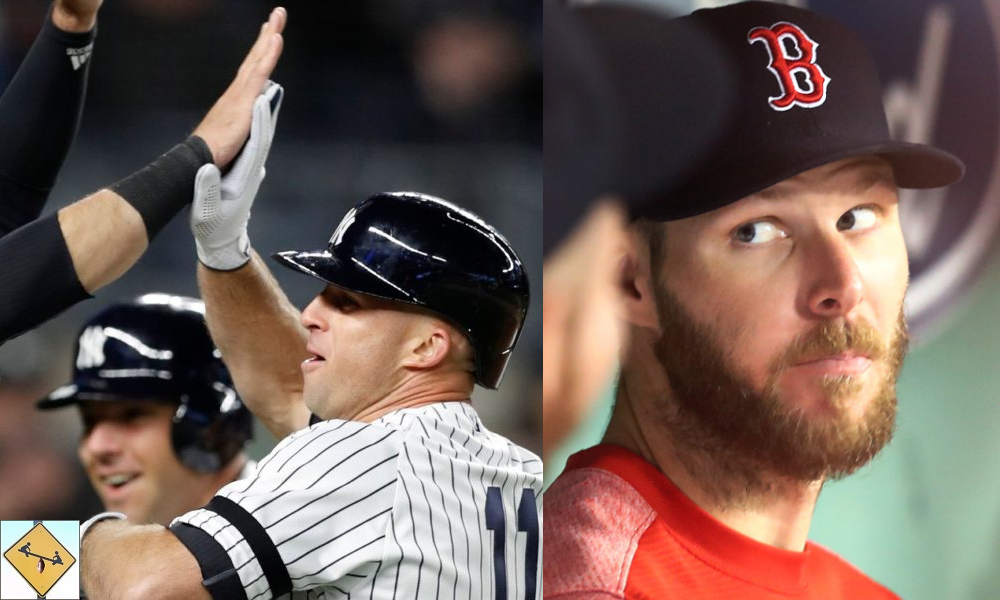 The New York Yankees and Boston Red Sox are annual playoff contenders, yet something different is happening in 2019. Yankees vs Red Sox now means perseverance versus futility. Are either sustainable trends?

As the New York Yankees completed a series sweep of the San Francisco Giants last weekend, two more players left the game due to injury. We are still awaiting the final prognosis on DJ LeMahieu and Gio Urshela, but we have already reached the point where New York’s injury replacements are going down with injury. The Yankees are in the midst of a legendary April for amount of players and amount of talent (as measured by WAR) on the injured list at one time.  A total of 19 hitters have played in at least 10 percent of the season’s games thus far for New York. Another 15 men have appeared in at least 10 percent of games on the mound. LeMahieu and Urshela had both been playing great, so hopefully their new injuries are not overly serious. We keep saying this, and it never ends up being true.

Over the weekend, I attended a Trenton Thunder game, the Yankees’ Double-A affiliate. I was on the lookout for the next man up because the Triple-A Rail Riders have already been harvested to the bone for the big club. The funny thing is, everyone that comes in as a replacement seems to pick up the slack. LeMahieu leads the team in hits even though he wasn’t even a starter to begin the year; Urshela and Clint Frazier both have an OPS over 1.000 as substitutes; Luke Voit has a 39-game on-base streak; Domingo German is tied for the league lead in wins. It’s all just been amazing.

Our bullpen has actually been a weakness, even though it is the most talented and healthiest positional group on the roster. Those are the ironies of early season baseball. Through 30 games, New York is 17-13, one of the half dozen best records in the entire sport. More importantly, through the meat of this injury bug, the squad has won 7 of its last 10 ballgames.

Last week, you hit on a key point. Building depth is one of the ultimate trump cards in the MLB regular season. Every team needs 162 games started and 1,458 lineup spots filled. The same 25 guys are never going to be responsible for that level of workload. It is why the Los Angeles Dodgers have found such wondrous regular-season success in recent years. They built a flexible roster, complete with many more than five plausible starting pitchers, and the willingness to use the 10-day IL to their advantage when skipping starts. The Yankees are operating out of necessity right now, but it should continue to pay dividends as the season progresses.

Compare this to the Boston Red Sox for the 2019 version of Yankees vs Red Sox. They have had eight of their nine hitters play in at least 20 games and register at least 70 at-bats. Despite that consistency, they are off to a terrible start. No thanks to its pitching staff either, Boston is currently 14-17, already 5.5 games out of first place after just 31 games on the ledger. This mark was as bad as 7.5 games out as of Monday, to keep things in perspective. On this pace, the Sox will lose the AL East by about 43 games come year’s end!

But we know Boston is too talented to remain this far down. This is roughly the same team that just won the World Series. Chris Sale isn’t going to remain winless; every starter not named David Price has a WHIP over 1.30. The maligned bullpen hasn’t even been an issue. Three of the team’s best pitchers are working from the pen. The Red Sox have allowed the fourth-most runs in baseball. Last year, a similar staff allowed the sixth-fewest.

Some starts are unsustainable on the positive end. This one feels unsustainably bad. I know the current records make all the difference, but throw out the records for a second. Would you rather be in the Yankees’ position or the Red Sox’s spot? In other words, would you rather have everyone of note decimated by injury but some set to return, with good position battles pending for Aaron Boone? Or is it preferable to have all your regulars playing but not living up to expectations and simply in need of finding that tweak or catching that break? There is part of me that envies Boston. It feels much simpler to have Chris Sale right the ship than put a stop to this endless trek through the trainers’ room.

It is hard to separate how far down the standings the Red Sox currently are from the health of their roster. Boston is very healthy and that health has meant nothing on the field thus far. A season long slump for every notable Boston player currently struggling is highly unlikely, but so is the current number of Yankees’ injuries and the fact that their replacements have all played great. We are talking about two completely unlikely scenarios! Yankees vs Red Sox never disappoints.

The Red Sox are three games under .500 as of May 2nd, after winning six of their last ten games. Perhaps this is a sign of a rebound, but as you love to point out, those 17 losses are banked for the year. Run differential is a better indicator of a team’s actual abilities, leading me to believe that Boston is in real trouble. The Red Sox have a -23 run differential. Only four teams, two as of two days ago, in the entire league have a worse differential as we enter May.

In contrast to Boston’s struggles are the Yankees, who have a +34 run differential. Only four teams in the entire league have a better differential than New York right now. Ignoring injuries completely, I’d much rather be the Yankees right now. They are playing great baseball, while Boston is not. Adding injuries into the equation, or a lack thereof in the case of the Red Sox, and it’s now a cut and dry decision. Yankees vs Red Sox easily goes to New York. They will be returning their All-star talent over the next month or two. Boston is not missing anyone major, but is struggling along with the worst teams in the sport.

The Yankees’ backups might not be able to sustain their high level of play, but as the All-stars and original starters come back to the diamond, it will keep the team’s level of play at its current heights. The only thing helping Boston improve is the notion that they should be playing better, so they will start playing better. I expect the Red Sox to play better, but they have to do a full 180 in order to dig themselves out of the hole they created in April.

As defending World Series Champions with a healthy roster, if anyone can do it, the 2019 Red Sox can do it. Yet its far more likely they return themselves to respectability, but fail to climb into the playoff picture. April baseball tells lies, but when your entire team is slumping, you can’t expect every single player to suddenly play great.