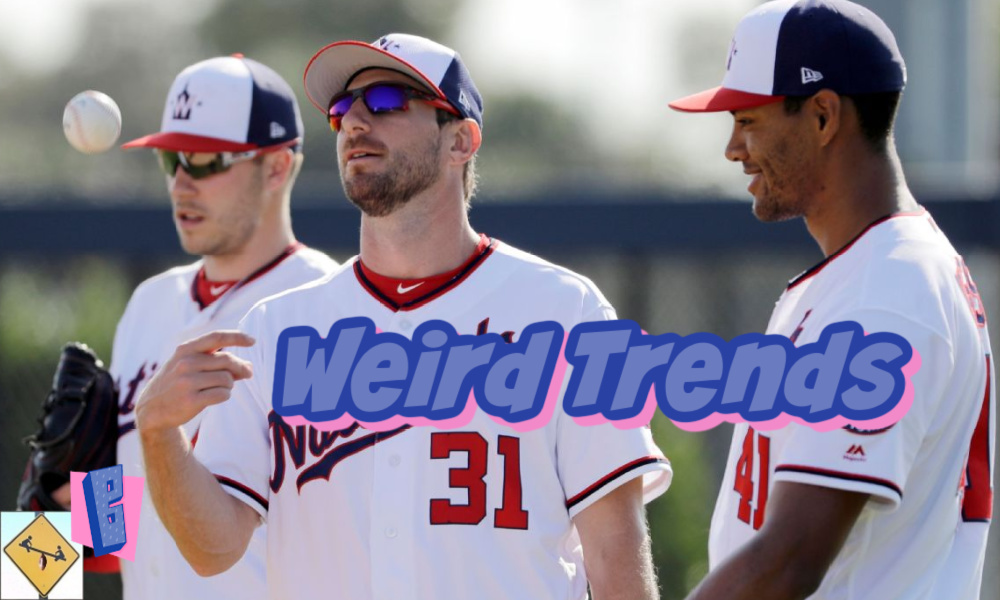 We knew this season would be unique, but the 2020 MLB Season is weirder than anyone could have imagined. Small trends have become major shifts in how the game is played. Plus, hitters can’t hit.

The 2020 MLB season is essentially a third of the way over already. Many teams have already passed the 20-game mark of this 60-game slate. Still others have only played something like three series all year. St. Louis has played eight total games. Thus is the reality of this season. It feels like every team will go through a week where they get shut down. Hopefully it kind of evens out by season’s end, and hopefully it continues to be one team, one series at a time. If the positive tests permeate multiple teams and two, three, four series at a time, that’s when the season is in jeopardy. For now, we can live with this weird reality. Boy is it weird.

Many were wrong about how the league would be able to hold on. Maybe it’s only holding on by a thread like this, but we are treading along regardless. As for the product on the field, it is interesting to see what I personally was dead wrong about. I’m not talking about the standings either. We are still too young into any season to declare Baltimore or Miami for real. Instead, what I’m referring to are overarching ideas of how we thought this season would play out, and it hasn’t.

Number one is the bullpen. I figured bullpen usage would be more restrictive than we’ve seen in a long, long time. Teams would lean heavily on veteran, experienced closers. They would be entrenched in roles because it would be too short a season for them to (a) lose the spot, or (b) have anyone else comfortably gain the closer job. Instead, we have seen almost the exact opposite.

Teams are cycling through closers like it’s nothing. This makes sense in retrospect. Even one series of blowups could dump a team down the standings. Managers have to be prepared to change anything and everything at a moment’s notice. And nothing has a more obvious impact than changing closers from a veteran with two bad outings in a row to a young guy with a flamethrower for an arm.

Teams have also been more willing to rotate their “closers” into more important moments of the game early on, willing to throw someone else out there for the ninth. Like many things happening this season, that seemed like an obvious change that was only precipitated by this weird year.

To go along with the bullpen’s extensive usage, starters are being yanked earlier than ever. Again, this has been a trend, but 2020 exacerbated the trend. Maybe it’s because of this, or it could be something else, but another thing I was NOT prepared for was pitching being so far ahead of hitting. Hitters cannot hit in 2020.

The league as a whole is batting .241. That’s the lowest mark since the fabled Year of the Pitcher in 1968 when the league was forced to lower the mound to combat pitcher dominance. This season has seen the second-highest strikeout rate in history, but that isn’t anything new. The record has been set and reset for literally 11 years in a row heading into this season. And 2020’s rate is actually a little lower than 2019’s at this early mark.

Yanking starters earlier and forcing batters to face new arms nearly every at-bat is part of the explanation, but it isn’t everything either. I assumed top-flight hitters would be the safest bet of anyone this year. They wouldn’t have their playing time jerked around. They wouldn’t be pulled early like starters, and they wouldn’t even be at the mercy of one series like a star closer. That has all been true, but some of them have just been plain bad anyway. I didn’t see that coming.

It’s almost as if no one had time to practice and warm up for the year. Wait, they didn’t. Spring training is long for a reason. Baseball is a momentum sport that thrives upon building successful habits. Most players form those habits and build up consistency in the spring. There is no substitute for live action in the ballpark and a complete lack of offseason preparation has unsurprisingly created a weird and unique 2020 MLB season. The real question we must now ask is simple; are any of these trends here to stay?

As you noted, several of the strange trends were actually developing during 2018 and 2019. They have simply been magnified here in 2020. Closer rotations were becoming more prominent and are going to be a permanent fixture of baseball here on out. It makes sense. Play the hot hand to literally close the book on the 8th and 9th innings of a game. If your initial closer has gone cold, play the young hot hand. Do not sacrifice games because you want to utilize a player in a specific role. Consider them all relief pitchers and let your bullpen win you the game. That is our new mindset. This does not mean the idea of a closer specialist is dead.

We are still going to have those special players who are shutdown closers, but not every team is going to have one. There simply are not enough great pitchers who can do what a great closer does as often as the role requires. Seasons are normally long, so rotating closers makes sense if you lack that one special player. But more importantly, you need a backup if your starting closer gets injured. Every win counts triple in the 2020 MLB season, so of course they are rotating like crazy. But this seems like a trend for the future, not just this weird year.

The yanking of starting pitching will also continue so long as teams have deep bullpens they can rely upon. A failed starter usually goes to the bullpen, so why not yank your starter for a former starter in your pen who can easily give you three plus innings? This too feels like a permanent shift. There simply are not enough dominating starters to complete teams’ rotations. Having four decent players to fill those last two rotation spots can work, as long as you swap and move with your players on board. Setting ego aside, this strategy is sound for many teams.

Our final trend feels like a moment in time, because a lack of hitting is likely a product of a lack of spring training and too much uncertainty in the sport. This is not something that will last. It may not even survive the season, because many players will find their groove. But with a constant changing of pitchers, the job of the hitter gets harder. Since that pitching philosophy is here to stay, what will batters do to overcome it? Can they seriously prepare for every pitcher in a team’s bullpen, as opposed to just the starter who previously would go six or more innings?

Next season will be equally interesting, as these new trends find staying power. Perhaps they die off completely, yet that seems unlikely. For now there is baseball and its kind of weird, but also awesome. Comment below with your thoughts on these perplexing new trends.