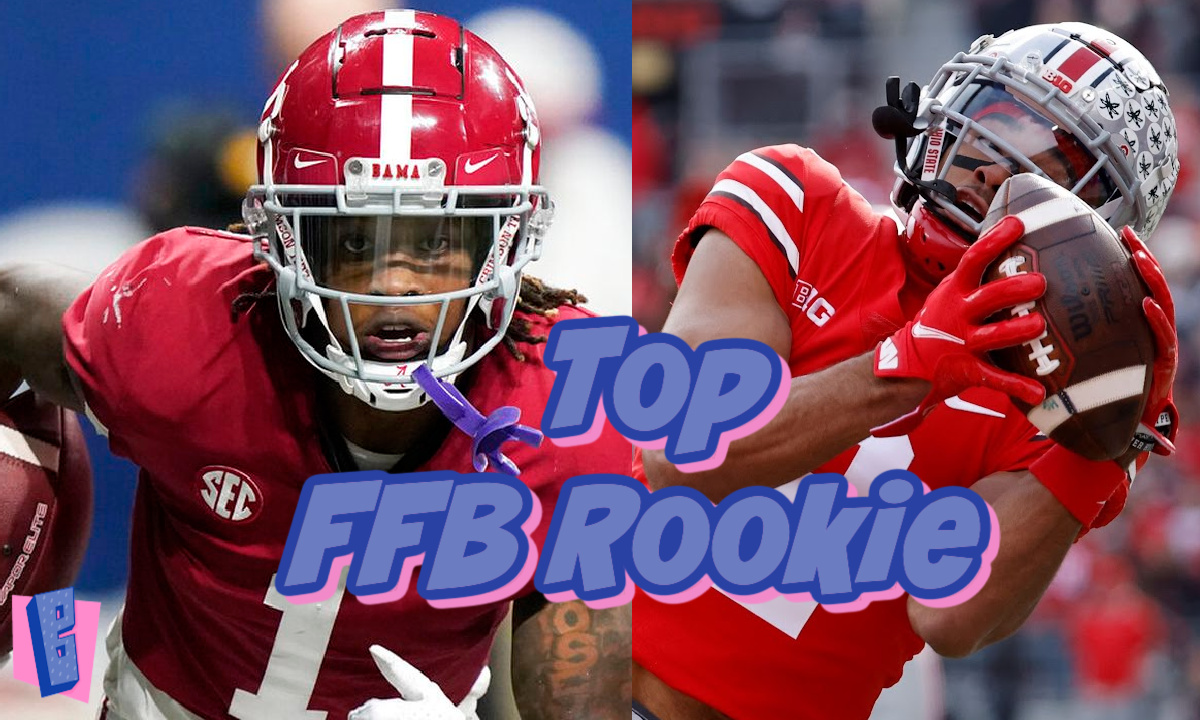 The rookie wide receivers in Fantasy Football 2022 are off the charts, but the top five players include a running back and EVEN a quarterback. Yes, its a little crazy. But that’s how you win your league title.

This year’s slate of NFL rookies is deceiving. On paper, it’s not a great crop of players for fantasy football 2022. At least, that is how things appear heading toward the new season. Yet that’s complete hogwash! We all know there were no “elite” quarterbacks, running backs, or tight ends in this rookie class. That leaves a wide swath of wide receivers to carry the load, although it might be hard to figure who will be best out of that bunch.

This sentiment will end up looking stupid, just like any fantasy football 2022 owner who ignores these top five rookies. New stars will be born and while smart money is on wide receivers breaking out, we have our eyes on other notable positions. Will multiple QBs and RBs turn into starters? It is definitely possible with how unpredictable rookies tend to be. We love one running back in particular, along with a quarterback. Those receivers are indisputable.

1. Jameson Williams, WR – I think he is the best receiver in this class. That wouldn’t always be enough to be ranked first, but going to Detroit should be a good spot for him. This is a team on the rise but in need of a top option. If he is healthy enough to start Week 1, he should be thought of as the top fantasy rookie. Even if he misses the early going in his recovery, Williams should be a future stud.

2. Chris Olave, WR – Garrett Wilson was drafted a pick earlier, but Olave was the better Ohio State wide receiver in college. He also lands in a better spot in the NFL, with a quarterback who loves to toss it down the field, Michael Thomas to pull coverage away, and an innovative offensive system that hopefully continues after the retirement of Sean Payton.

3. Breece Hall, RB – Okay, perhaps I misled folks a bit in the lead-in. I DO have a non-WR in my top five, and it is your guy, Breece Hall. He may split carries to begin with but seems likely to garner the job if he’s good enough. It is hard to compete with the fantasy volume of a number-one running back if someone isn’t in the very upper echelon of the WR position league-wide.

4. Drake London, WR – He likely enters camp as the second option and top wide receiver on this Atlanta offense, trailing only tight end Kyle Pitts. That is a huge boon. And yet, this offense should be really, really bad, so what are we talking about? Pitts had a legit, rookie breakout last year and still only finished as the TE9 in standard scoring. Because of that, London can’t break my top three.

5. Skyy Moore, WR – We’ve been burned by Kansas City wide receivers not named Tyreek Hill before. The good thing for Moore is that Hill is no longer on Kansas City. This team loves to throw the ball and will utilize a number of weapons on the outside. There is a chance for someone to grab the throne here. Hill is gone; Travis Kelce is 32; the top receivers brought in were hardly relied upon or no longer wanted by their former clubs. Moore has work to do but offers an intriguing upside in this spot.

1. Chris Olave, WR – I hesitate to anoint Olave as the top fantasy option, because I don’t see the Saints having a very good season. Yet Jameis Winston puts up monster numbers in the passing game when given the right opportunity, and Olave is the weapon he was missing. Fantasy owners can ignore Winston’s interceptions and New Orleans’ losses, because Olave will get his. There is no one on the team to challenge him on the depth chart, meaning he steps in and gets the damn ball right away.

2. Breece Hall, RB – You can’t draft a running back in the first round anymore, but Hall would have gone top 15 in years past. He’s an exceptional talent who likely slides ahead of Michael Carter as the tandem split reps for New York. Successful running games require two excellent backs, with few exceptions. Carter and Hall together will be excellent, but I see Hall getting the Red Zone reps and therefore owning tremendous fantasy value. Both players help one another, as opposed to stealing fantasy points, because staying healthy and playing all year trumps five good weeks.

3. Jameson Williams, WR – Our top three are the same, but the order varies greatly. Consider me cautiously optimistic about the Lions and quarterback Jared Goff. This tempers my expectations for Williams, who will certainly be a huge threat in their offense. But will he put up big fantasy numbers beginning in week 1? Can Detroit’s offense do enough and will Goff produce enough for Williams to be fantasy relevant? I view him as boom or bust on a weekly basis, but overall a solid receiver for this fantasy football season.

More BuzzChomp: Fact VS Fiction with The Offer Ep 1 – Making The Godfather

4. Garrett Wilson, WR – I’d rank Wilson higher if Zach Wilson was more dynamic last season, or if the rest of the Jets receivers didn’t have such high ceilings of their own. Playing with Elijah Moore and Corey Davis will be great for Wilson, but may hinder his fantasy value. That said, it could also make him wide open for several weeks as teams struggle to cover all three playmakers. Wilson will get plenty of looks from Wilson and while I’m tempering my excitement, the New York Jets offense is poised to be dynamic and living in the endzone. Wilson and his fantasy numbers will prosper.

5. Kenny Pickett, QB – You may be gun shy about grabbing a quarterback, but I’m not. After successfully snatching up a young Chargers rookie who turned into a superstar, Justin Herbert, I’m now eyeing the Steelers and Pickett. This is a sleeper pick to be sure, as we don’t know if he will start week one, or when he’ll see the field. My money says by late September Pickett will be leading Pittsburgh, who just so happened to make the playoffs last year with 25% of Big Ben. This team has weapons and Pickett has nearly zero pressure on him to do anything. This is the rookie quarterback to watch.