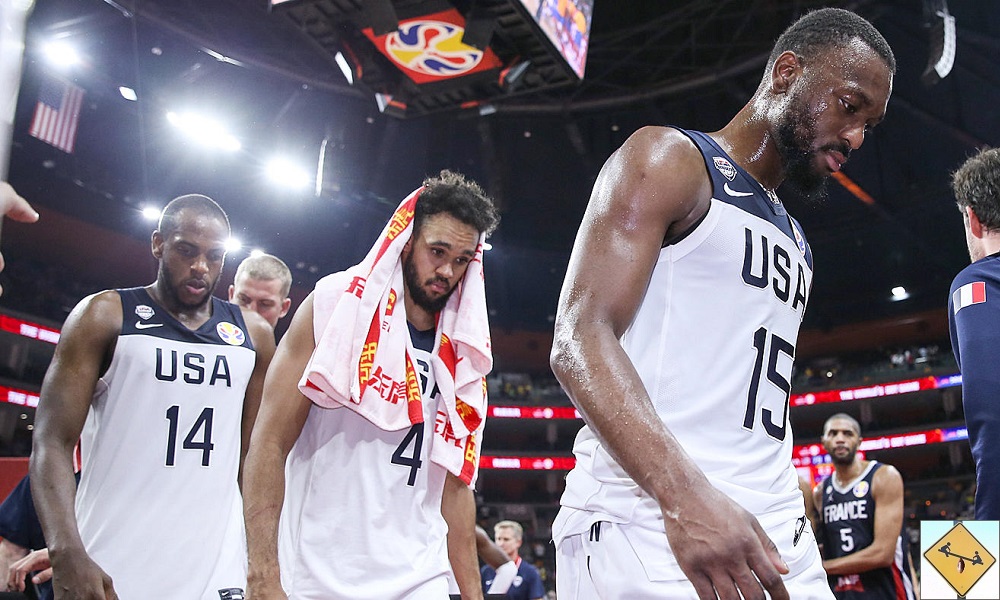 Maybe you think the basketball World Cup means little and Team USA losing to France is no big deal. But sometimes losing points to something bigger. Much bigger.

The basketball World Cup has been taking place these past couple weeks. On Monday, the USA team clinched a spot in the quarterfinals, also clinching a spot in the Tokyo Olympics at the same time. Then on Wednesday, Team USA was eliminated by France. There was never really a doubt that the US would make it out of the opening round of the World Cup. However, unlike any squad in the past dozen years of international competition, they failed to reach the finals, let alone win the tournament.

This year’s team is made up of household NBA names, like always. There are some All-Star-level players on the team. But by any measure, this is the worst USA team in international competition at any point this century and perhaps much longer. There are no stars. Something like the top 15 Americans all dropped out of this competition for varying reasons. That made this team which failed to win the World Cup essentially USA’s D-squad.

The fourth-team out of the United States was still the favorite to win the World Cup, yet they did not. As I said, we still have all NBA rotation players (or better) one through 12. No other country comes close to that. But there is no cohesiveness and no star talent to be found. It mattered.

It all begs the question, does it matter that no great players want to play for Team USA, at least for the World Cup? I would expect much bigger names for the Olympics. If that doesn’t happen, then something else is going on. Do international competitions really matter to begin with in sports where daily competition is so popular? We aren’t talking about gymnastics here, where the international tournaments mean everything. And finally, does it matter that the US lost?

In my opinion, yes it does matter that no players care about Team USA, at least in World Cup years. This should be a growth opportunity for guys. Everyone on this team should be at the very least on Donovan Mitchell’s level: a second-tier, young star trying to prove himself internationally. Why is Mitchell, instead, the best we have to offer?

I’m less concerned about my second question. The competition itself doesn’t really matter to me. The fact that none of the best guys are there matters more than the games themselves. Of course then, logically, the fact that Team USA lost shouldn’t matter all that much. This is the team we sent. That is what matters. They fell short, but we knew this was the worst team we’ve ever sent. I don’t see the outcome as being all that important compared to the process. The US failed before even tipping off, and it’s the players’ fault.

Its all well and good to lose when you send your worst team ever to the World Cup, but Team USA’s loss does not bode well for Olympic competition. We agree that the US failed miserably even before this tournament got underway. Its a true shame that zero NBA stars chose to participate, because it could have been a solid warmup for the upcoming regular season. It could have been a chance to grow their brands internationally, but the NBA stars collectively passed. That sucks.

I do believe that Team USA’s loss is bad, however. They fell to France by ten points, which truly pinpoints the issue with America’s approach to international competition. We do not spend time creating a team of players. Team USA tries to add as many recognizable names as possible to its roster in order to build buzz. But you know what also builds buzz? Winning the World Cup. When none of the country’s best stars wanted to play, perhaps it was time to reevaluate how the team would be handled. Perhaps it was time to actually form a real team out of the guys that wanted to play.

I mean no disrespect to the level of effort put forth by the players on Team USA, but something has to change. Either we take international basketball competitions seriously and actually field a consistent team of players, or we stop participating. No one questions who will play for Team USA when the World Cup of soccer (aka futbol) roles around. Some new names emerge, but more or less the core roster comes back to try and win again. Outside of being fired, even the coach is the same, which goes a long way towards team building and consistency on the field. Let’s not get into the results, because that is not the point here.

With basketball, it seems like a constant question of who is going to play and who will be coaching Team USA. Yet the stars in the NBA have not completely turned over in the last five years. There is certainly more money to be made from the NBA than anything the World Cup or Olympics can offer. But the ‘will they’ or ‘won’t they’ is hurting competition.

I’d much rather see this ‘D-team’ as you called it keep playing together and make a run at the Olympics, than for the entire roster to be different with stars finally choosing to play. Are you in or not? Apparently its an open question.