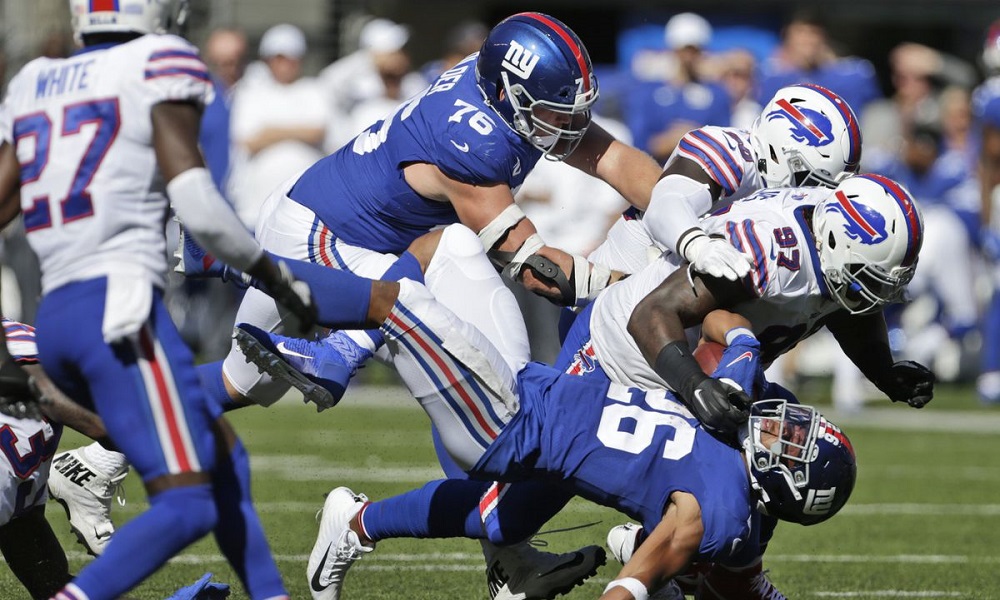 We are two weeks into the NFL season and the New York Giants are already in re-runs. I swear I have watched the exact same game in back to back weeks. Enough already!

In week one, on the New York Giants’ first possession they marched right down the field 91 yards and scored a touchdown. Saquon Barkley accounted for 72 of those 91 yards and it looked like the Giants’ offense had Dallas on their heels. Unfortunately, New York’s defense couldn’t stop anyone, let alone the Cowboys. We know how that story ended. Fast forward to week two and the same thing happened against the Buffalo Bills.

The Giants got the ball on the opening kickoff and fed Barkley on 4 out of 5 plays, driving 75 yards with ease. This ended with a 27-yard touchdown run by Barkley. Then what happened? Boom, boom, boom. Buffalo put up 21 unanswered points, including a 99-yard TD drive. All the sudden its 21-7 due to the fact that New York basically had pass rush, although the Giants did come up with 3 sacks in the game. The Bills’ wide receivers were catching passes and no one was within 5 yards of them.

“When you got time and get no pressure, I can’t cover nobody for 10 seconds?” cornerback Janoris Jenkins said. “Who can cover somebody for 10 seconds?” Even Lorenzo Carter, when asked about quarterbacks having too much time and making it hard for the secondary, stated rather bluntly “Sh**, it’s true.”

I can already hear the Daniel Jones murmurs getting louder this morning, and I can’t say that I blame people for feeling this way. But let’s not forget who was playing with Eli in week two. There was a skeleton crew at wide receiver including Fowler, Jones, and Core. No Tate (suspension), no Shepard (concussion), and Cody Latimore suffered a calf injury last week during practice, so he was not at 100%. Despite all of this, the offensive line played well and Manning was still only sacked one time. Yes there were two interceptions, but one was at the end of the half when Manning was just hurling it towards the endzone with hopes and prayers. The second came off a batted ball that ended up in the hands of a lineman.

It’s getting harder and harder for me to come to the defense of Manning. His stat line was not great, 26 of 45 for 250 yards and 1 TD, plus 2 interceptions. But once again, he was not the reason New York lost. Others I know are taking this as an opportunity to pile on Manning and blame him for the losing. They think a different quarterback could do more, but let’s be honest about this team once and for all.

Even with no-name receivers against Buffalo, the Giants offense could have done a better job. Third down efficiency was downright awful, going 3 of 12. The second half consisted of two punts, a loss on downs, an interception and one nice 12 play, 76-yard TD drive. That possession got the game to within one score, but on the very next series Buffalo answered with a TD of their own with a little help from the Giants. An asinine unnecessary roughness penalty on a field goal attempt gave the Bills an automatic first down.

I fighting to find some positives from this game to build on, but it was a total repeat of week one’s failures. It was nice to see Barkley get more touches (21) than last week (15). He turned them into 107 yards rushing and a touchdown. The Giants defense was decent in the second half. If not for the aforementioned penalty, the defense would have only been responsible for 3 points after halftime. I am grasping at straws before this season is declared a loser, but we still have not seen the complete 2019 Giants yet.

The more losses that pile up before Tate and Co. return to the field, the less it’s going to matter when they are actually back. New York’s hole will be too deep by that point. Next up for the New York Giants is a trip to Tampa Bay to play the Buccaneers. I have to be honest, I don’t have a read on this Bucs team after two weeks. They got blitzed by the Niners in Week 1 and then had an amazing defensive stand to defeat Carolina in week two. Which team will show up against the Giants?

If we are going to get the New York defense that played better in the second half against Buffalo and not the one that played so poorly to start these first two games, then maybe the Giants defeat Tampa Bay. Maybe there is real a shot at a win, but I’m starting to get skeptical. I’m starting to see Daniel Jones approaching.