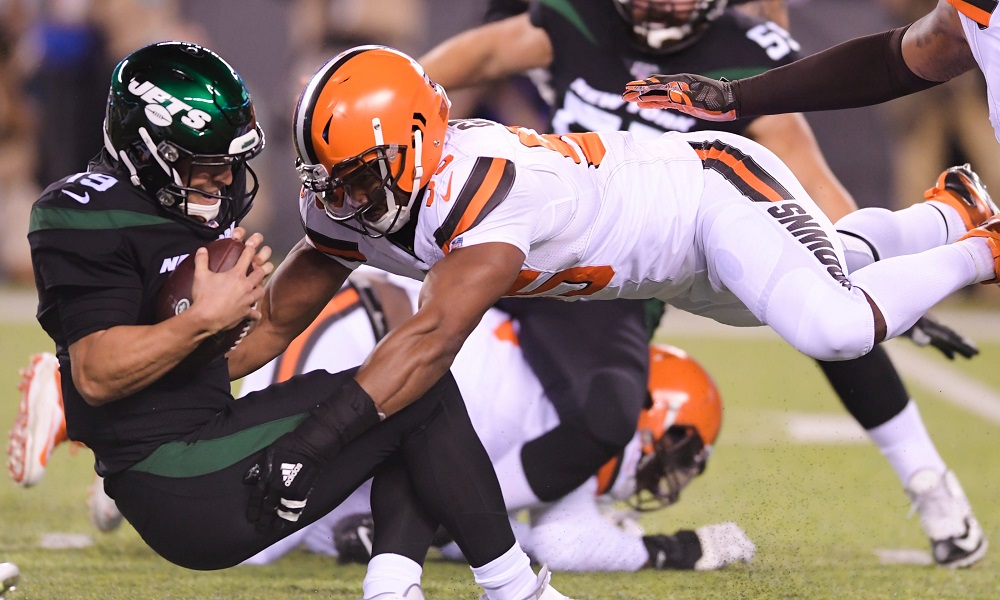 Unprepared, undisciplined, and lacking the cohesiveness to win. The 2019 New York JETS. Just End The Season. That’s what J.E.T.S. stands for.

J.E.T.S. JUST END THE SEASON.  That’s what my father has been telling me for 35 years, and its the quintessential acronym for this current New York Jets season.  It should come as no surprise that I am a realist, yet I continue to be criticized for my pessimistic views. There’s literally nothing good to feel about this football team.

Being a New York Jets fan is like being the abused in a relationship.  No disrespect to those dealing with serious abuse, but Jets fans certainly deal with plenty of emotional abuse. We keep thinking things will get better and the person will change, but in the long run they just keep beating us until we pass out or give up.  That was Week 2’s game against the Cleveland Browns, which ended at the unwatchable time of 11:30 PM ET.

Monday’s debacle wasn’t football.  Honestly, I’m not even sure what to call it.  People will say “they’re on their third-string quarterback.” Others will say “the defense is on the field too long and they got tired.” Those are just excuses for a team that doesn’t know how to play, coach, or function in a league where other teams are making moves and improving. That is the 2019 New York Jets, plain and simple.

This organization promised change.  We got change, but it’s all for crap.  Adam Gase is the first Jets coach to lose his first two games of the year since, ready for it… Rich F-ing Kotite. We all know how that year ended.  The Jets offense has only mustered 11 points over their first two games. That doesn’t sound like an offensive genius to me.  Their new loudmouth, full of bravado, defensive coordinator isn’t selling the goods either.  It’s clear to see why he’s jumped around the league.  Odell Beckham Jr. had 161 yards receiving against them, but it makes sense considering New York’s shinny new toy from last year, $72 million dollar man Trumain Johnson, was benched the whole game.  Well done coach.

These men were considered offensive and defensive masterminds with their schemes and play calling.  They have yet to live up to that with the Jets. In fact, the play calling on both sides has been so awful that it’s a wonder Jamal Adams and Le’Veon Bell haven’t asked to be traded yet.

Let’s look ahead now to the brutal matchup against the New England Patriots.  New England has yet to give up an offensive touchdown this season.  If the Patriots succeed in keeping New York out of the endzone, they will become the first team to not allow a touchdown in their first three games since the 1937 Chicago Bears.  Let’s be honest, this is going to be a bloodbath of epic proportions.

The spread for last week’s Patriots/Dolphins game was 18.5 points and the Patriots scored 43.  This week New England is an unprecedented 22.5 point favorite against the Jets.  Considering New York’s quarterback situation and the fact that they can’t stop a nose bleed, I foresee this being an absolute disaster.  Remember when New England scored 41 points against the Jets a few years back on Christmas Eve?  This is going to be worse.

On a positive note, the Jets found someone who can kick the ball through the uprights.  Literally the only positive was that one sentence. Get ready Jets fans, 0-7 is right around the corner.  Sh*t.