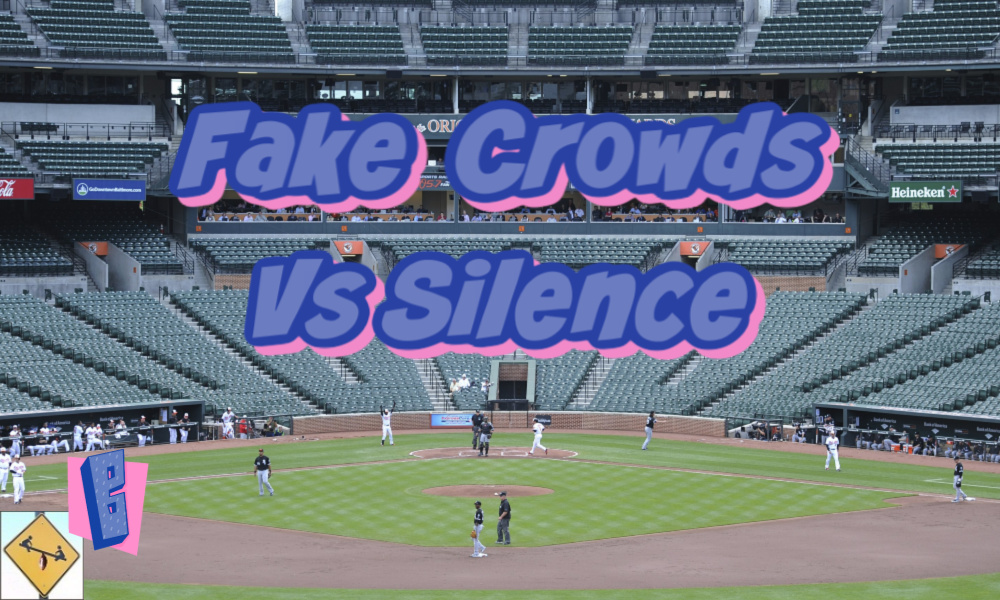 We are getting sports in 2020 with several major caveats. What’s ultimately worse for fans? Fake crowds or complete silence? Not all sports are created equal.

All of the American, professional, team sports outside of the NFL are set to return (or begin) action this month. MLB is aiming for July 23 to start its season. The NBA and NHL are planning on restarting their respective seasons either a week or two after. Sports in 2020 are back.

With these restarts comes the question of what sports will be like as a live event during the COVID-19 pandemic. We already know there will be no fans in the stands. But that doesn’t limit the options to television viewers as much as one would think. There are three main avenues in terms of audio during the telecast.

More BuzzChomp: Should the NFL delay the start of its season?

1) Sports can give us the event in reality. This would mean long stretches of silence and little to no noise coming from the playing area itself unless players were individually miked (which seems unlikely). We could get a glimpse into the trash-talking and coach maneuvers if the leagues allow, which again seems unlikely.

2) Sports can pipe in ambient sound/background noise. This gives off the impression of people watching the event but nothing more.

3) Lastly, the sports can pump in a fake crowd, complete with chants, and most importantly, reactions to what is happening during the game, a la a crowd in the Madden video games.

Also on BuzzChomp: Embrace the New Normal in our Horror Comedy

We are already getting a glimpse of these options in professional soccer games overseas. Some leagues are even giving viewers at home the option of whether or not to pipe in the fake crowds. But soccer seems different than our American counterparts as far as the crowd goes. I know I lumped all the sports together at the beginning, but I actually think fake crowds will have a drastic difference depending on the sport.

With soccer, the camera is pulled way back to give us a view of the large playing surface. It, however, does not show the stands unless specifically panning. The ambient crowd, therefore, is not a part of a soccer telecast other than background murmuring or chanting. There are also far fewer outcome-altering plays during a soccer game. Those are the plays in which a crowd is most important to the feeling of the moment.

Basketball and hockey are in a different boat. Every shot of in-action play shows the stands, as fans are right on top of the game (or directly against the glass in hockey’s case). The back-and-forth action cannot help but show empty seating. Therefore, a background crowd would, in my mind, sound somewhat disconcerting. We can see there are no people.

Baseball is in the middle. The crowd is not physically evident in every pitch, but many balls in play would show the stands.

I think my conclusion is that I would not want fake crowds in sports where I can plainly see no people. However, I know the counterargument in my own mind. Exciting or important plays lose a lot of luster when there is no audible reaction from the telecast. Perhaps this will come down to the announcing team, but a big hit or big shot feels less so if it is greeted by silence, even if you know logically that what just happened was huge.

Ah, the age old question of sports in 2020. What is worse; fake crowds or silence? I think we all agree that the return of sports is a very good thing, even if it doesn’t totally work and feels kinda wonky. Those calling for the cancellation of seasons are fear mongering, because let’s face it, there is at least one way in which games can safely be played, even if it’s uncomfortable and strange. Thankfully our sports leagues are going for it, minus fans and on neutral sites. We know the NFL is going to utilize fake crowds for its broadcasts, at least noise wise. Is there a universal answer to this question of realism?

Personally, I love silence and have often muted games to play music or simply watch sports in the background. The overwhelming noise of the crowd, announcers, players and the like is something I don’t mind living without. This is true of regular season games, but the playoffs are a different beast. While a lack of crowd enthusiasm for big plays during regular season games is not a big deal, no one wants to miss something during a playoff game. A complete lack of emphasis on what is happening during sports in 2020 will certainly make them more challenging to follow and less exciting overall.

Casual fans rely on the announcers and crowd to signal when great things happen, or major moments are taking place. It can also be difficult to recognize something major on a television broadcast without prompting by the crowd in attendance. Fake crowds or silence? I like silence, but it simply does not work for sporting events. Fake crowds via noise and cheering and booing are needed, even if we ‘see’ empty seats in the stadiums and arenas. Those empty seats may get filled with CGI people or advertisements or nothing. But after one game or two, we will get used to the emptiness. Fake crowds will sound like what we are used to from before, so it’s on the broadcast networks to fill in the gaps on TV.

I would like to tell you that it’s the broadcaster’s responsibility to “bring it” in the absence of fans in attendance, but such expectations are unfair. Soccer and futbol announcers are known for their boisterous personalities. Other sports have a mix of analytical people, former players, and color commentators who may or may not bring the color. Look for more celebrities and comedians to be invited into the booth. Wouldn’t it be fun for Jack Black to call a Yankees game? Or for Adam Sandler to call a Los Angeles Lakers game? I hope this happens, because it will only make sports in 2020 better and help us forget what is missing.