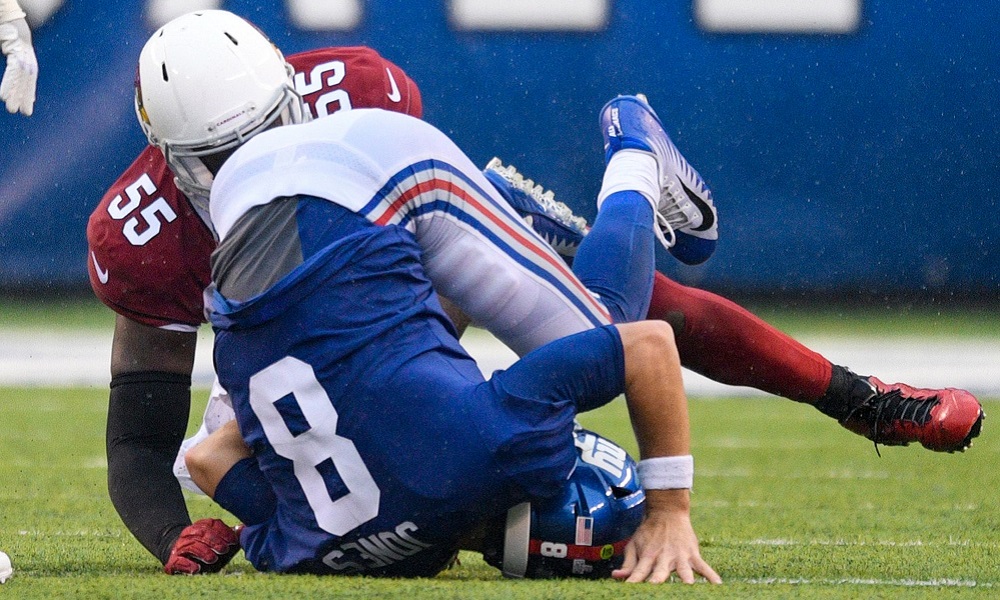 Do not let the New York Giants off the hook. They are in a world of hurt after an awful loss to Arizona and spoiler alert, profanity was needed.

This week’s article will not be PG! The New York Giants let us down and now we weep, yell, cry, scream and push forward. We do not let them off the hook. For all of the positive steps forward that I thought I saw New York make against the Patriots on both sides of the ball, the Giants immediately took two steps backwards against Arizona. Those good feelings completely evaporated after an inexcusable loss to a terrible Cardinals team.

I don’t even know where to start. I’m usually a positive person when it comes to the New York Giants, but not this week. Because I could easily go off on a tangent regarding so many different asinine areas that New York failed, I will not even pretend to be positive. Sunday’s loss was unacceptable.

This was a very bad loss, and there are no two ways about it. The Giants were at home, playing what most consider to be a bottom five team in the league. A combination of bad play calling, terrible O-line play, and a nonexistent run defense all contributed to a disappointing and spirit crushing loss. Betcher’s defense got a pass last week because of the opponent, but this week has has some serious explaining to do.

Saquon Barkley and Evan Engram returned to New York’s offense. This was supposed to elevate the team and provide a much-needed spark against a clearly beatable opponent. Arizona essentially has no idea how to cover a tight end, yet Engram had one god damn catch for six yards all game. Sure, he had some drops, but perhaps one might choose to exploit their opponent’s weakness just a little bit more. Just a little bit.

It was good to see Barkley back on the field, but there was also a moment where we nearly lost him for the rest of the season. Barkley came up hobbling after getting tackled by the feet, yet he avoided serious injury. He only missed a play or two, in what amounted to one of the few positives from this football game.

Also on BuzzChomp: JoJo Rabbit is a can’t miss movie of pure brilliance

Will someone please tell me what happened to the Giants offensive line? Weren’t they supposed to be getting better? Daniel Jones was sacked eight f@cking times. That’s right eight times, and two of those were strip sacks where he had no idea the defender was about to crush him. His two fumbles turned into 10 points for Arizona. Add in another Jones interception (He needs to cut that shit out really fast) which also turned into a Cardinals touchdown, and there goes the game. Three turnovers turn into 17 points.

There was no momentum and no flow to the Giants offense all day. In the first half Arizona ran 40 plays and the Giants ran 24. Are you kidding me? There was a point in the game when New York had more points scored than plays run. Even with all of their mistakes, the Giants went into halftime down by only three points. Costly turnovers and a missed field goal in the second half ultimately led to New York’s loss. They now sit at 2-5.

Kyler Murray was basically a non-factor in the game, going 14/21 for 104 yards and zero touchdowns. Arizona didn’t allow him to throw the ball, so why the hell were the Giants not stacking the box after getting torched on the ground on the first two series of the game? Chase Edmonds looked like a rushing champ. Because you are afraid of the threat of the QB running, you leave the middle of the field wide open for the backup running back? I’m getting mad again just typing. Its unacceptable.

For the third game in a row I was sitting on my couch and knew exactly what play was coming over and over again. The Giants play calling was atrocious. If I know what’s coming, then rest assured the defense does too. After the 100th sack of Jones, New York faced 3rd and 18 on their own 30 yard line. The most obvious play call in the world was a draw play and low and behold, guess what was called. It went for three god damn yards. Then on 4th and 15 the Giants went for it and came up short. Arizona promptly padded their lead, but even still New York had a “chance” at the win.

Also on BuzzChomp: Running into 2020 without a hiccup

Pat Shurmur’s explanation of the predictable draw play leaves me more concerned then when it happened. “It was going to play out the way I thought. … Stop them, make them kick a field goal at the very least, then we go down and score a touchdown. Plus, I wanted to get a chance to make it on fourth-and-15.” I’m sure he was hoping to get a chunk of yards with Barkley on the draw and make it a manageable fourth down, but that never happened. Apparently he planned to go for it on fourth down beforehand. He never considered punting, even though it was a three point game.

While I applaud the balls to go for it on 4th down on your own 33 yard line, a better play needs to be called. New York needs to put Jones in a position to not get sacked yet again. Any positives from this game are buried under a giant pile of crap. I could keep adding to the pile, but you’ll just have to tune into the Section 323 podcast this week. I have a lot more to say! We are getting to a point in the season where this type of loss can a spiral out of control, so the Giants must change and change fast.