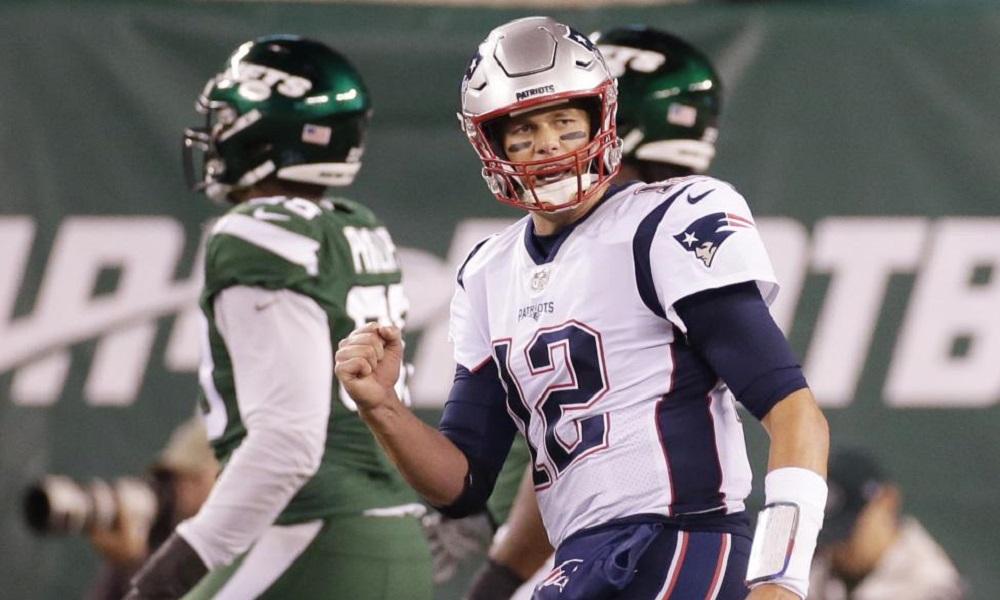 Words cannot describe the pain that Tom Brady and the Patriots delivered to the New York Jets. We should have seen it coming, but somehow did not.

There’s an old saying that states “If you can’t say nothing nice, then don’t say anything at all.”  Well screw that, because Tom Brady just took the New York Jets from behind yet again. Its not entirely Tom’s fault, even though he’s a you know what. The Jets are also the Jets. Editor’s Note: The desired article title was “F@ck You Tom Brady” so you get the idea.

Wow, do I have a lot to say about what a disgrace this New York Jets team currently is.  Shame on me, and all of us, who drank the Kool-aid after last week’s upset victory over the Dallas Cowboys.  What we all failed to remember is that these ARE the New York Jets and they ALWAYS lose to the New England Patriots and Tom Brady.

Last night’s first quarter was pathetic.  In typical fashion, for the whole world to see, on a night when you are the stand-alone game, the New York Jets quite simply shit the bed.  They allowed Tom Brady and his smug little grin to march right down the field for 16 plays and almost nine minutes to score an easy touchdown.  The Jets defense couldn’t stop them and the Patriots went 3 for 3 on third down.  New York had no way of stopping them all game, and when it was time to make a play, Mr. Perfect just carved them up.  It makes me sick to my god damn stomach to see him parade around the field like a clown on a horse.

Can someone please put some pressure on Brady?  Oh that’s right, Leonard Williams is nowhere to be found. What about some pass coverage? Ah yes, Trumaine Johnson is the biggest disappointment in all of creation.  He’s a joke and if the Jets were smart, then they’d cut their loses and get rid of him. They are not and he doesn’t deserve to be on the field.

Also on BuzzChomp: Eastern Conference Rises from Ashes in 2019-20

New York’s offense was apparently seeing ghosts.  As Sam Darnold so eloquently stated for the world to hear, he couldn’t do anything.  The offensive line was putrid.  Ryan Kalil should have stayed retired. He’s awful and apparently forgot how to snap a football while drinking coffee and watching re-runs of Seinfeld on his couch all summer.  Good signing by Joe Douglas. Hopefully this isn’t a sign of things to come from you.

Wide receivers weren’t getting open. Le’Veon Bell had no running lanes. On that rare occasion when he had room to earn more than four yards, there was a holding penalty.  As for Darnold, we know what happened there.  Is he a franchise quarterback?  The jury is out. Yes, it’s just one game against arguably the best defense in football.  Statistically, Darnold had the worst game in the franchise’s history.  He ended up with a 3.6 passer rating, including four interceptions and a lost fumble. That’s negative fantasy points for those counting. Ouch!

This team had no excuses, so what happened?  Coming off of what could have been a turning point victory, the Jets couldn’t get it done.  The coaching staff is so bad, that I wouldn’t be surprised if they are fired mid-season.  They make zero adjustments and get out-coached in every game from every angle.  Adam Gase said after the game “That was brutal.  We just didn’t do anything right.  We were bad in all three phases.”  You think? Even your self-assessment is garbage coach.

Looking ahead, the Jets now must travel to Jacksonville where Minshew Mania rains supreme.  The Jaguars have a solid front four on defense and can get to the quarterback.  D.J. Chark Jr. will be covered by Johnson, so we know what to expect there.  I don’t see this going well.  I hate football. Jaguars 38 – Jets 3