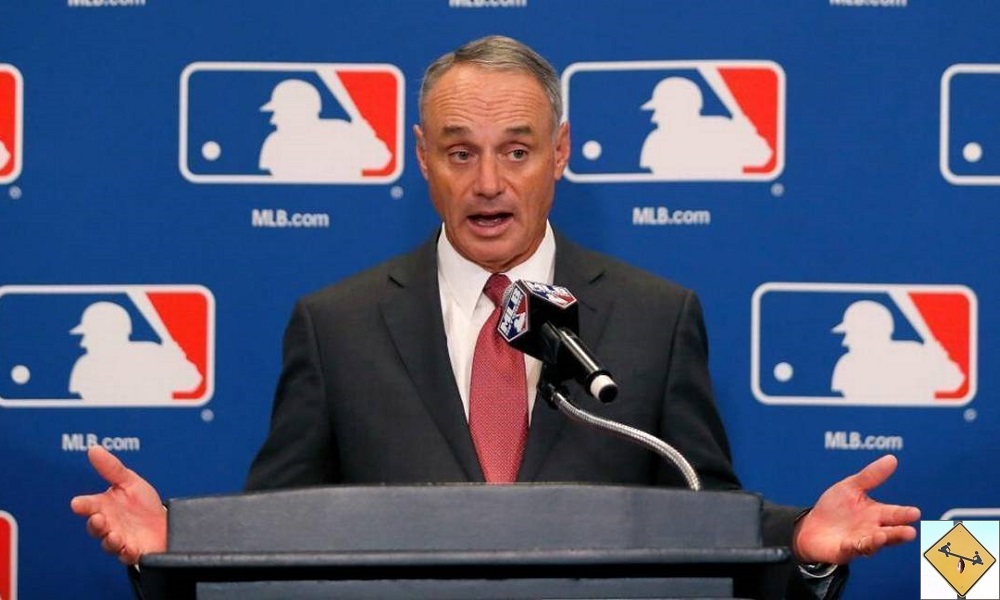 No one is perfect, but Rob Manfred has egg on his face. We all see the lies and attempts to deflect. Is the MLB commissioner being nefarious, or just incompetent?

Sure, it’s a big deal that the Boston Red Sox traded away perhaps the second-best player in the sport. But there are more pressing matters at hand. We keep finding more layers to this Houston Astros cheating scandal, even as we await the punishments for the Red Sox cheating scandal, due out sometime this week.

You can tell MLB is getting worried about the continued blow back because it tossed out a semi-ridiculous playoff format change that probably will never happen but tried to distract everyone from the scandals. Ooh, the top seed getting a bye and picking its opponent? …Wait, the Astros have been cheating for four years straight!

When Houston penalties were first levied, we learned that the front office and management were not involved. It was a player-driven ploy for a single season. The upper folks were penalized for lack of institutional control, to borrow a phrase from the NCAA.

More BuzzChomp: Cannabis inspired gifts with everything but herb

Then we learned that that was probably all a lie. A later report claims that the plan was in fact started by the front office and began as early as 2016. Less substantiated claims say that AJ Hinch’s destruction of a monitor wasn’t his stance against the cheating either. It was more likely him trying to destroy evidence. MLB also claimed that there was no buzzer scheme that followed the trash can idea, though video evidence is mounting that the Astros may have been cheating with buzzers as late as this past season.

Former Toronto pitcher Mike Bolsinger is even suing the Astros for unfair business practices, negligence, and intentional interference with contractual and economic relations. Essentially, he thinks the Astros’ cheating ruined his career, and he might be right.

Remember when the commissioner’s office tried to tell us that the rapid change in home-run rate was caused by an unpredictable alternation inside of the baseballs? It seemed like a dubious claim at the time that MLB wouldn’t know the reliability of its own balls. Now, as it seems like the commissioner has been trying to cover up a whole lot of stuff, maybe we should add the flight of the balls to that list too. If Rob Manfred is to be believed, we could go back to dud, flightless balls at any moment, without anyone knowing when it will happen. Yeah. Right.

If Rob Manfred isn’t explicitly lying to the fans in an attempt to sweep unpleasant stories under the rug, then he is, at best, bad at his job. Either he’s being nefarious or being incompetent.

The cheating itself needs to be removed from the game, but does the unreliability of the commissioner’s office bother you? It feels like a huge deal to me. The commissioner works for the owners, but I wished the owners held each other accountable to the same standards that we would expect. I can’t imagine the 29 other owners are okay with Jim Crane cheating to a World Series and not being seriously penalized for it. I can’t imagine any of the owners like the unpredictability of the baseball itself. You’d think 30+ serious business people would be up in arms over Manfred’s shadiness. Maybe they are behind closed doors.

Rob Manfred’s blatant lying reminds me of another commissioner of a more popular sport who is also required to stand in front of the world and just take it. That is literally the job of a commissioner as far as the owners are concerned. Roger Goodell does it time and time again. Manfred is now being asked to do the same. MLB owners would prefer he did nothing further, but alas, Manfred wants more from his job. He is more than a human punching bag who speaks words written by his bosses to appease a fan base that’s smart enough to find its own answers and the real truth.

Nobody cheats just once. Does anyone honestly believe the New England Patriots ever stopped cheating? Its been one scandal after another, quietly swept away by the NFL so long as the Patriots are one of the best teams in the sport. Does anyone honestly believe the Houston Astros cheated only during the playoffs of one single season? No one is that naive, especially not baseball fans. We love our analytics and we want the truth.

Its unrealistic to change history, but stripping championships from a team is warranted when evidence proves they cheated for multiple seasons. Houston was incredibly successful during all four years, but especially during the last three seasons. They won over 100 games all three years and made the World Series twice. That is not a coincidence. So what is MLB and Manfred supposed to say and do under these circumstances?

The commissioner has one job, to protect the league and the game. If he must sacrifice himself to do it, then so be it. That is literally his job. Why are the owners not furious at Manfred’s lying and how he’s handled this mess? Its likely because he’s done such a great job of hiding so many other nefarious activities over the years. Its likely that they realize this cheating scandal could destroy their league. Rob Manfred must deflect, a la the new playoff format, spread lies, the baseballs are the same, and save the game he loves from complete destruction.

Two of the best teams in the sport were cheating and BOTH won championships by doing so. This was not an isolated incident limited to a single season. How many other teams have cheated in how many other weird and wacky ways? Baseball and cheating are intimately linked, but this is true of all sports. Its acceptable to cheat in football as long as you aren’t caught. If the referee didn’t see it, then it didn’t happen. But in baseball there are unwritten rules and some things are okay, while others are frowned upon.

This has most assuredly changed, because literally everyone took things too far. If MLB swapped the baseballs to increase home runs and didn’t tell anyone, which seems likely, then even the league is up to the same tricks. Its about making money and Manfred’s job is to ensure more people watch his game, not less. He’s doing a pretty darn good job, even if everyone hates him for it.