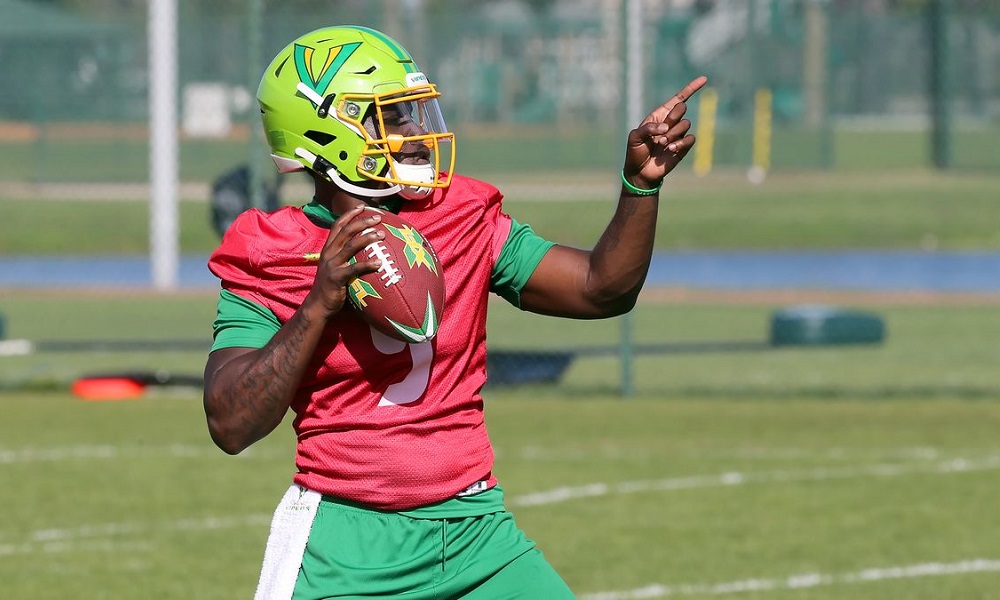 Fans are nervous, and rightfully so. Is the XFL 2020 worth watching? Will it succeed where no one has before, including itself? History points to its success, so go ahead and be excited.

We are on the cusp of the rebirth of the XFL 2020. This is the same XFL that only lasted one season back in 2001, adding itself to the ever-growing list of failed football leagues. That list is now even larger, with the AFL and AAF also failing.

More BuzzChomp: XFL 2020 will never be the NFL and that’s okay

How do we know this version of the XFL will succeed? How do we know the same fate isn’t waiting for it like all of its predecessors? The answer lies in its history and the history of the WWE. You can get excited for the XFL 2020, because future success is coming.

Back in 2001 a new and innovative football league was created, a joint venture between Vince McMahon (WWE) and Dick Ebersol (NBC). The original XFL began in February 2001, immediately after Super Bowl XXXV. They wanted to take advantage of the public’s love of football. In order to get generate interest, the XFL was promoted as having fewer rules to encourage rougher play with the tag line “Extra Fun League.”

The league had eight teams in two divisions, including major markets and some not directly served by the NFL. One major and still current difference between the XFL and all other leagues is that the XFL operates as a single entity with all teams owned by the league. There are no individual owners. It was created to build on the success of the NFL and professional wrestling. During this time in 2001, the wrestling world was riding a massive ratings boom generated in the late 1990’s. It was something we may never see again, and was known in the WWE at this time as the Attitude Era.

The XFL was going to piggyback on this Attitude Era and translate onto the football field with its emphasis on sex and violence. It was hyped as “real” football without penalties for roughness and with fewer rules in general. The games featured players and coaches with microphones and cameras in the huddle and in the locker rooms. Stadiums featured trash-talking public address announcers and scantily-clad cheerleaders who were encouraged to date the players. Yes, that last one was true.

This all sounded innovative for the sports world and fun and exciting for fans. It was exactly what was going on in the wresting world at the time and it was working. The WWE proved to be an incredible success, so why not the XFL?

This can be summed up in a few words. Money, ratings and perception doomed the league. The first two are major factors since it was reported that both the WWE and NBC each lost $35 million. That monetary loss, along with dropping ratings due to bad football, was enough to shut things down. But the major contributing factor to the lost money and low ratings was the league’s perception.

There was an enormous lack of respect for the XFL in the sports world. Games were rarely seen as sport, but rather a weekly episode of Raw or Smackdown that involved a football. On top of that, the league was co-owned by NBC. Therefore all of ESPN, ABC and Fox Sports Net (owned by Fox TV) had zero interest in reporting on the XFL. It was owned by the competition.

The perception never got better, as the XFL ranked No. 3 on TV Guide‘s list of worst shows of all time in July 2002. It also ranked No. 2 on ESPN’s list of biggest flops in sports, behind Ryan Leaf of all people. In 2010, TV Guide Network listed the show at No. 21 on their list of the 25 Biggest TV Blunders of all time. This was a sports league, not a show, but no one seemed to notice.

One additional factor that contributed to the league’s failure was NBC itself. Even though NBC was all set to broadcast XFL games for two years, the network quickly announced it would not broadcast a second season because it had won the rights to the 2002 Winter Olympics. Vince had a plan B that involved broadcasting the league on UPN and/or TNN. But UPN put an end to that plan by demanding that Smackdown be cut from two hours down to one and a half hours. That didn’t sit well with Vince McMahon and he soon announced the XFL’s closure on May 10, 2001.

If you are a new league and want to distinguish yourself from an already established brand, then you need to give people a strong reason to watch. This was one of the original XFL’s strong points and something the XFL 2020 is continuing to do.

Instead of a pre-game coin toss which is customary at the beginning of every NFL game, XFL officials put the ball on the 50-yard line and blow their whistle. One player from each team lines up on their 30 yard line and they race to recover the ball. The winner determines who receives the kickoff option and this play was dubbed “The Human Coin Toss” by commentators. In theory this was a new and innovative idea. Yet one player famously separated his shoulder on the very first scramble, causing him to miss the rest of the season.

Along with no extra points, jersey nicknames and overtime being similar to college football, the most innovative XFL claim was the use of the “Skycam.” Yes, this is now standard in NFL games. But the XFL was the first to make it happen way back in 2001. Our new version of the XFL includes some of the old features, along with some new and improved ones. These include changes to the points after touchdown, kickoffs, punts and a new double forward pass.

Its been 19 years since any of us watched an XFL game. Back then the league was seen as an illegitimate WWE production that would never work, and it was discredited because of it. Fast forward to today where we are about to find out if the XFL has learned from its past mistakes. Will the league improve upon its product and create a truly legitimate and respectable sports league?

At face value, this new version of the XFL appears to be on the right track. Its history points to success. Instead of sprinting to the field only one year after announcing the league’s creation, which is what the XFL 1.0 and AAF both did, there has been a two year build up to the XFL 2020. They made sure everything was done right.

This XFL is no longer a WWE product, yet its still owned and backed by Vince McMahon. Its now under the Alpha Entertainment umbrella, which has no ties to WWE. Many legitimate names have also entered the mix to help guide this league forward. Oliver Luck is the XFL commissioner and everything about how its being treated feels more like a serious league.

There are still many unanswered questions that will ultimately decide the fate of the new XFL. But the biggest question of all is simple. Will the play on the field be any good? This will certainly be the ultimate deciding factor on whether the public’s attention will hold. Everyone loves to watch good football. The good news is, we don’t have to wait much longer.