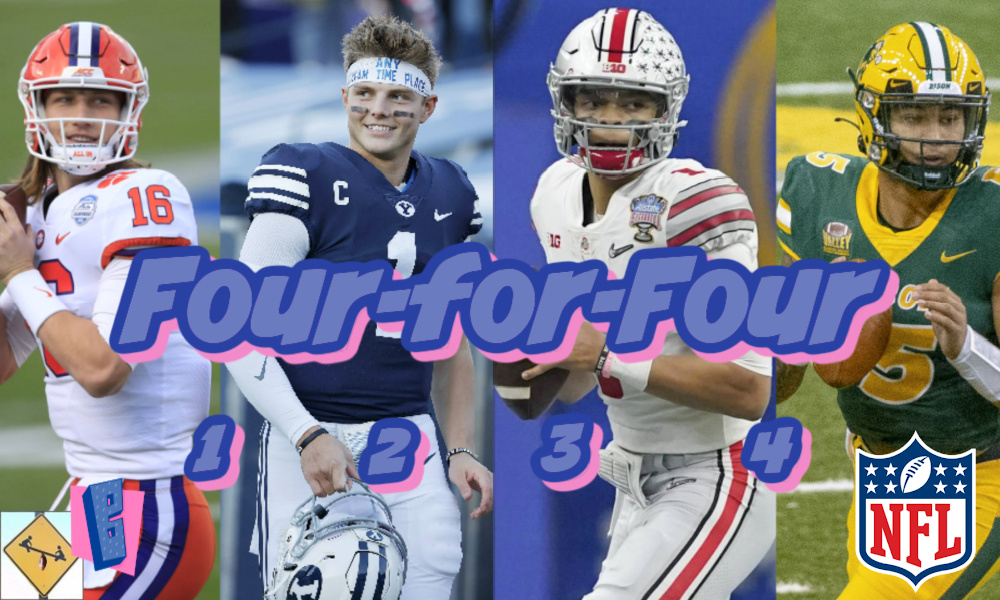 Could it happen? Will we go four-for-four atop the NFL Draft 2021? There are four elite quarterbacks and five with the talent to succeed in the NFL. Scenarios abound as needy teams scramble to make moves.

The NFL Draft 2021 is on the horizon. Starting roughly a month from today, a lot is different about this year’s event. Teams have much less information this year compared with years past. Some top prospects opted out of the 2020 college football season, meaning they have zero game tape since the season prior. Pre-draft workouts, combines, interviews, and everything else changed as well. The draft was always a crap shoot; this year, even more so.

With that said, there is a group of quarterbacks that stand out. They are too hot to handle. Depending on who you ask, as many as six quarterbacks could be taken in the first round alone. It seems all but guaranteed that at least five will be taken. Those five hot commodities are Trevor Lawrence, Justin Fields, Zach Wilson, Trey Lance, and Mac Jones. Will we go four-for-four at the top of the draft with our first four picks? It’s more likely than you care to admit.

Four-for-Four atop the NFL Draft 2021

While Jones lags behind the other quartet, the real intrigue of this draft is how soon does that fourth guy, whomever it is, get taken. Will four quarterbacks be drafted in the first half of the first round? Probably. What about all inside the top 10? Yeah, perhaps. How about this? What if all four guys go in the top four picks, one QB after another, first, second, third, and fourth. It’s possible!

The first four picks currently belong to Jacksonville, the Jets, Miami, and Atlanta. It could be argued that only one of those teams needs a quarterback right now. But more realistically, perhaps three of the four could be in the market. Jacksonville is obviously taking Lawrence first. New York seems ready to move on from Sam Darnold, even if his failures were mostly a case of what surrounded him. And Atlanta has the aging Matt Ryan, with the roster on the precipice of a rebuild.

That leaves Miami outside the four-for-four. It is clearly too soon to move on from Tua Tagovailoa after he entered his rookie year behind the curve due to injury recovery. But we know Miami doesn’t have to stay at three. With this level of QB prospect available, teams will be scrambling to move up if one is the guy they want to build a franchise around.

The logical trade that had been floated for weeks was Miami trading pick three and Tagovailoa (and more) to Houston for Deshaun Watson. Houston would then be in the three spot but not need a QB. I’m not sure if it’s more or less likely now that Houston moves Watson in any deal. With sexual assault allegations and court cases mounting day after day, the Texans are probably wishing they had actually dealt him when the price was astronomically high. But now they certainly want to get rid of the guy. However, while other teams probably still want to make a deal for him, especially if they can buy lower, the PR hit would be quite something. Watson is the unknown in this.

Even if Miami doesn’t swap out for Houston, another team may move up. Further down the draft, there are teams who may be looking for that QB upgrade of the future: Philadelphia, Detroit, Carolina, Denver, San Francisco, and New England, all within the top 15. It would take a big offer to move to three, but not as big as moving from the back half of the draft.

That is the hope for the four-for-four to come to fruition. It can happen!

How good are they? So damn good! We hear this every single year, but only every three or four years are the quarterbacks truly all worth the hype. The QB class of Baker Mayfield, Josh Allen, Sam Darnold, Lamar Jackson and Josh Rosen nailed 3.5 out of 5 in terms of NFL success. This year the top of the NFL Draft is certainly going to be filled with quarterbacks, and there is a scenario where four-for-four actually happens. Because it involves at least one trade but likely two, I do not realistically see it transpiring. But screw realism!

The issue here is that all three teams with picks two through four can technically pass on a quarterback in favor of a Pro Bowl level wide receiver or offensive lineman. All three have serviceable quarterbacks with upside for 2021 and could use the extra draft capital right now in a draft deep with offensive talent. I expect New England to move up since they’ve already shown they are spending big this offseason. Cam Newton is only a stopgap insurance policy at quarterback. Denver and Carolina also need to move up, or hope someone falls to them.

You poked at Miami because they are likely to deal, leaving me to discuss my New York Jets who hold the #2 pick. The Dolphins will make a deal if the Jets do not, because the haul will be too good to pass up. Unfortunately, I’m not sure either the Jets or Dolphins will deal with New England in this scenario. Denver is the team to watch. Let’s assume the Jets select Wilson and trade Darnold for some picks to Carolina. Then Miami and Denver make a deal. Yet this leaves the top WR or OL for Atlanta and Matt Ryan. Three-for-four ain’t bad.

Two trades need to happen to achieve four-for-four. I can see New York dealing with Atlanta, allowing them to hop Miami who deals their pick to Denver or Carolina. Ryan gets to groom his replacement and Wilson or Fields gets a year on the bench. I can also see the Jets messing up this whole conversation by selecting a different offensive player. Because New York holds another pick later in round one, they can technically wait and select whichever quarterback falls the farthest. They can also trade up several spots in round one, if their guy lasts past pick fifteen. This level of uncertainty is infinitely interesting.