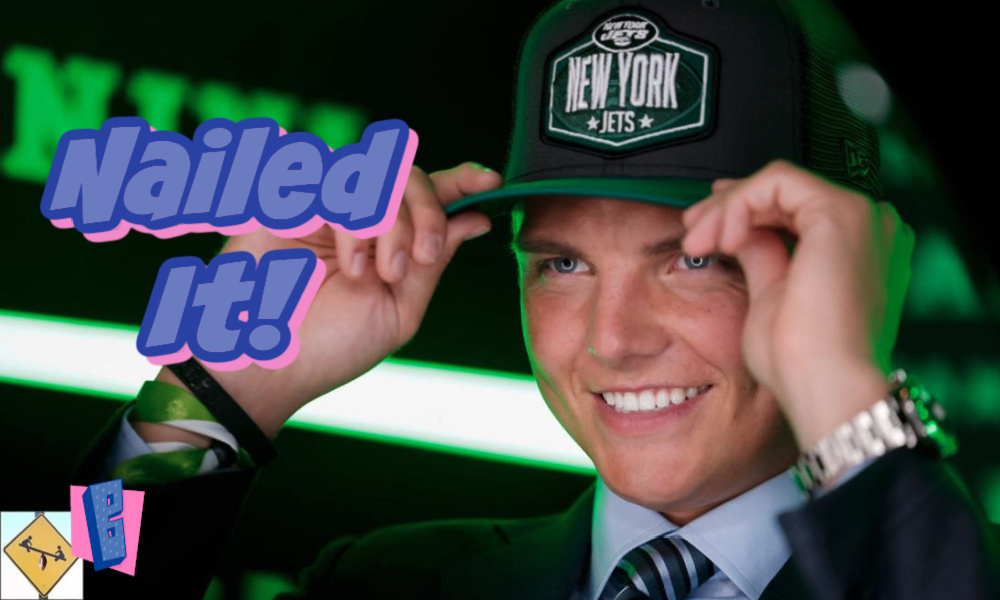 We refuse to jinx things, but gosh darn it we are excited! The New York Jets and New York Giants crushed their offseason overhauls and look nothing like their 2020 teams. Thank goodness. To the Super Bowl and beyond!

We did it! The New York Jets and New York Giants both made great moves! The 2021 NFL Draft is in the books and our offseason overhauls are nearly complete. It’s all smiles in New York after a stellar draft in which Roger Goodell was super awkward, as usual. A bunch of quarterbacks and pass-catchers went in the top 10, and everyone is wondering if the Patriots lucked into another perfect pick. Unlikely. All in all, this year’s draft was pretty predictable… outside of New York.

Our New York teams truly surprised us with their intelligent decision making. The draft took off at pick three, where San Francisco zagged on taking Mac Jones. Todd thought Jones was the fifth-best QB in the draft, so that move feels smart. Dan saw little difference between quarterbacks three through five and Todd prefers Justin Fields to Trey Lance, whose stock really plummeted in the pre-draft process. These are semantics, because the real good stuff happened next.

The San Francisco pick led to our favorite move of the draft. Chicago traded up with Todd’s New York Giants to select Fields at 11, giving the Giants an extra first-round pick next year. Boom. Then, it felt like the Giants selected their guy 20th overall who they would have reached for at 11 anyway. Stellar move! But that’s not all.

The Jets did the opposite of my Giants. After grabbing Zach Wilson, they traded back up into the middle first to grab their offensive lineman they wanted. Later on, they also added offensive skill players and lots of depth in the secondary. These all seem like solid moves, so how do you feel about the Jets’ draft overall as a lifelong fan? Start with whether you felt Wilson was the right guy at two. Now for my Giants hot take.

For the Giants, I am somewhat happy. I was fine with the Toney pick at 20 but would have been disappointed to see him go 11th. I don’t know if he will pan out; it might have been stupid to rely on the offensive line that is currently in place rather than take another swing there. New York also passed on arguably the best pass rusher in the draft, Kwity Paye. The specifics can be argued, but the move of trading back and still getting your guy is a sound one. By adding assets in next year’s draft, New York succeeded. They also did add pass rushing in the second and fourth rounds. If either pans out, it really solidifies the defense.

But everything comes back to the offensive line. If the line is terrible again, it hardly matters how talented the skill players are. You hate to see a team pour even more assets into improving the line after doing so so often in recent years, but if it’s not fixed, what other choice do you have? Ironically, Alijah Vera-Tucker, the Jets’ guy, or Rashawn Slater, could have made the most sense for the Giants at 11. Once they traded back, we knew they were happy with their current line structure. That alone will determine the 2021 success of the franchise.

The New York Giants have crushed the offseason. Everything about the Giants has been upgraded since last season when they overachieved among a rash of injuries and a lack of offensive weapons. Everything but one thing, the offensive line. In our perfect offseason article I noted that the Giants offensive line must simply be average for the team to win the division and be successful. They were nearly last in the league in 2020, so average would be a huge improvement. If the offensive line can improve in year two of Joe Judge, then the Giants are golden. Daniel Jones has managed to play well despite running for his life. Now he has two stud receivers to go along with his existing set of solid pass catchers and a stud running back. Depth may be an issue, as is Engram at tight end, but otherwise the defense is good and the team is in a great place.

Zach Wilson is absolutely the right quarterback for the finally and truthfully new version of the New York Jets. He fits our new offense better than even Trevor Lawrence, even if he ranks lower on paper. Wilson has a small-school chip on his shoulder, big market swagger, and a passion for football that is contagious. On a team that bleeds young and hungry, Wilson is the bright and shiny face to galvanize the Jets. This is all well and good, but thankfully Douglas hit a grand slam and nailed the rest of the draft to give Wilson’s Jets a true chance at victory this season and beyond.

More BuzzChomp: A Farewell Tribute to The Duke of Bridgerton

The New York Jets are in a great place. I was thrilled that we managed to add another stud to the offensive line. This is how a team builds longterm success, sorry not sorry to the Giants. We needed a bigtime wide receiver and running back as well, which the Jets managed to draft later on. First round talent kept falling to them and they nabbed four players with a 90 grade or better. There’s now depth at running back and wide receiver, but more importantly, their offensive skill players fit their new offense perfectly. Out with the old players who barely fit the old system, and in with the speedy playmakers who bleed power.

I’m doing my best to temper expectations, but the energy of the Jets is completely different. Coach Saleh bleeds his mantra of “All Gas, No Brakes” and it’s contagious. Having a coach that your players actually like and resonate with is probably the most important aspect of NFL success. Both the New York Jets and Giants now have that and both teams hit grand slams with their offseason overhauls. Neither resembles what played in 2020 and that is a tremendous compliment. May we meet in the Super Bowl, Jones versus Wilson.