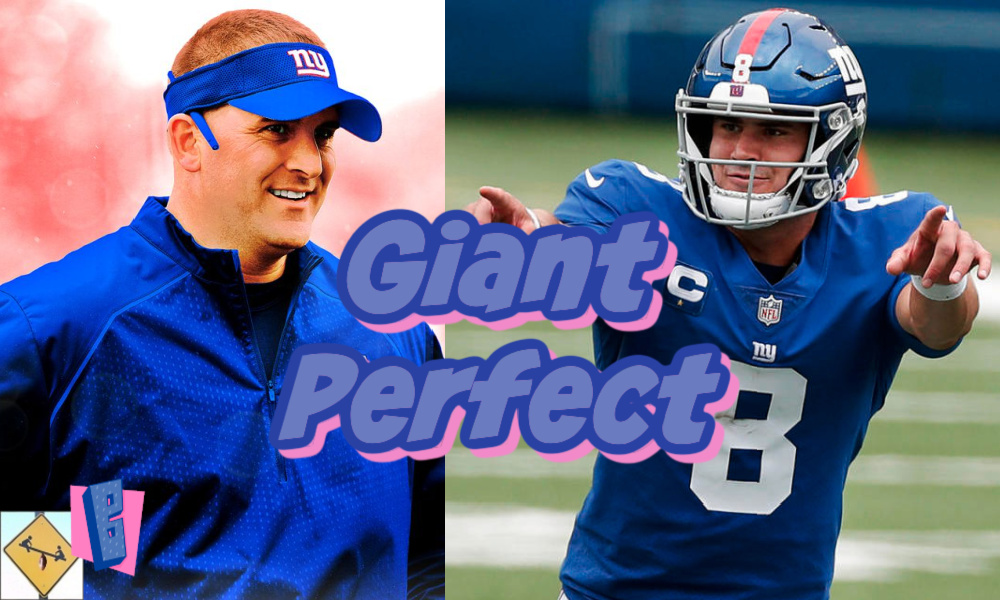 Is this the New York Giants perfect offseason? Do they have a successful foundation with Jones at QB? This team is all in, but the Giants are one giant what-if away from glory as well as demise.

The New York Giants and New York Hets have had busy and important offseasons in 2021. Last week, we went through some points and counterpoints for what the Jets have done and what we expect them to do through the draft. Now its time to shuffle across town into Giants territory where the water is warmer, the sun is brighter, and the foundation is technically in place.

Because the Giants technically have a foundation in place, they went shopping. Sometimes it is okay to overpay for key pieces. Kenny Golladay, Leonard Williams, and Adoree Jackson may have all been overpays. That doesn’t make any of them the wrong decision. These are moves to fill holes for a team on the verge of competing for the playoffs and, considering the division it is housed in, a division title. Yet we must make assumptions to arrive at this conclusion, and they are piling up quickly.

In regards to the Jets, we drew the conclusion that this has been a stepping-stone offseason where they built the setup. Next year will be more important, assuming that they correctly execute the setup. The Giants are two offseasons ahead of their cross-town rivals and have already passed the setup phase. This offseason was about roster-building for a team primed to compete. Unfortunately, it still remains to be seen if they did or did not flub the setup. Has it been a perfect offseason for the New York Giants? Did they nail the setup and therefore put themselves in prime position to make the leap this season? Fantasy mixes nicely with reality in the case of Big Blue.

Swinging for the Fences in New York

Todd Salem: New York’s success assumes one key aspect, that Daniel Jones is the right man to lead the team, and I just don’t know. Ideally, we would know by now. Smart teams would know by now. Maybe the New York Giants are a smart team, and it is right to move ahead with Jones. We can’t give them the benefit of the doubt because of how inept key moves have been in recent years, but they may end up outsmarting us after all is said and done.

I sure hope this is the case, because if Jones isn’t the guy, that means an awful lot. It certainly means this offseason spending spree was a waste. If another reset or rebuild is coming after another quarterback change, veterans like Golladay and Jackson aren’t going to be important. Those guys are dotting i’s and crossing t’s, not building scaffolding. Jones not working out as a franchise leader could also mean another regime change is on the horizon, which would set the rebuild back yet again. You can’t dig yourself out of the avalanche until you know which direction is up.

Counterpoint: The New York Giants believe in Jones, no question

Dan Salem: People tend to put way too much emphasis on the definition of a franchise quarterback. Nothing about Jones’ first two seasons makes me think he is anything but the franchise QB of the New York Giants. He has not been perfect or even great, but he has been very good at times and a solid team leader. Jones has improved many aspects of his game and overcame major adversity last season after losing his starting running back. Nothing has slowed him down or held up his progress.

New York’s worst case scenario is that Jones suddenly stops improving, makes too many mistakes and becomes the reason the Giants lose football games. This would cause them to decline his fifth year option and move on. Recent Sam Darnold history would indicate that the Giants would trade Jones before the 2022 NFL Draft to another team for a fresh start. Now we slowly back away from the cliff, because nothing about his first two seasons tells me this colossal collapse is coming.

Daniel Jones had a nice rookie season. It wasn’t on Justin Herbert’s level, but that is the exception, not the rule. Furthermore, the Giants nearly won the division last season in Jones’ second year. They scratched out wins without their best player. Jones has remained reasonably healthy overall and is trending up. He is your franchise quarterback.

Point: The New York Giants have a bad offensive line

Todd Salem: If Jones was the only question mark for New York, that would be bad enough. The Giants also happen to have one of the worst offensive lines in the sport, despite spending oodles and oodles of assets to improve it. That failure is almost as bad as Jones being a question heading into year three. And one leads into the other. The Jones question may have already been answered positively or negatively if the o-line wasn’t a train wreck.

Taking the Giants by their actions, they believe in Jones, have built an offense around him with enough skill players to succeed, and have key pieces on defense that can make plays at all three levels. That all sounds great, but in actuality, this could be the biggest mistake in football. A team builds all the pieces except for offensive line and pass rush. I don’t have stats to confirm this, but that team fails 100 percent of the time. It’s not for lack of effort, specifically on the o-line, which perhaps makes the failure even worse. Jones is on the chopping block here, as is the entire line, as well as Dave Gettleman. That doesn’t sound like the correct outcome for a team that had an offseason to supposedly push them into contender status.

Counterpoint: No comment, as this will be their undoing sooner than later

Dan Salem: Jones may be the reason that New York makes the playoffs and/or wins its division this season, but he won’t be the reason they finish with a losing record. The coach/quarterback core is solid for the New York Giants right now, but the actual foundation requires immediate earthquake retrofitting. For those not in Los Angeles, that means they put a giant house on top of stilts.

Across town the Jets are building the offensive and defensive lines first, or at least that’s the plan. The Giants have a nice defensive line in place, but have whiffed in the offensive trenches. This will be their undoing, assuming it’s as bad on the field as on paper. Lack of pass protection will yield more turnovers. Lack of run protection means Barkley’s return from injury gets stunted. No one wants this, but reality is rarely pretty.

Dan Salem: Because the New York Giants have excellent talent on both offense and defense, they do not need a great offensive line. Mediocre will be good enough. Daniel Jones is good enough to get the ball to his top of the line wide receivers with some pass protection. Barkley is great enough to make plays with some run blocking. As long as the Giants don’t have the worst offensive line, they can succeed this season. Aim for middle of the pack and this team can conquer the NFC East and be competitive in the playoffs.

Assuming the best, are these New York Giants on par with the best of the NFC? Not right now. We must see improvement from their franchise quarterback, combined with a streak of health for the team and multiple overachieving players. This is how they compete with Aaron Rodgers and Tom Brady. Lucky for the Giants, a successful season will be defined by winning last year’s worst division. They can do that.