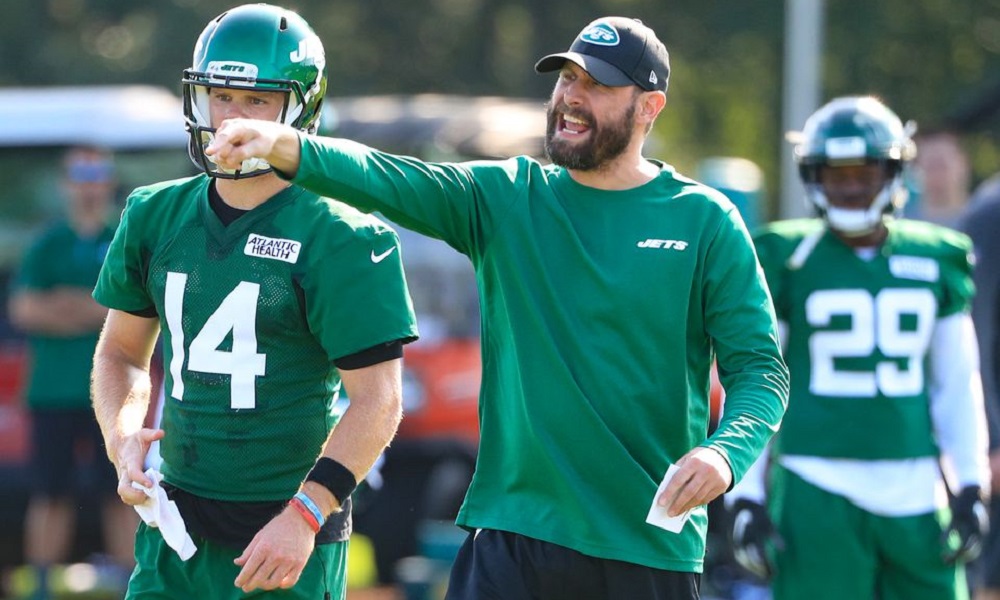 Being a classic New York Jets fan means I find darkness in the brightest of rooms, but this year’s team may finally be different. Can they shake the “Same Old Jets” once and for all?

“Same Old Jets.”  That’s what I always say when it comes to the New York Jets and their yearly promises of new hope.  This is a different year though, and with this new season comes a new look, a new coaching staff, a new defensive mindset, and a new “Cow Bell.” Consider me borderline optimistic.

It goes without saying that this franchise is trying to start over and there is a lot to look forward to. Can they stop being the “Same Old Jets” and start becoming contenders?  I hope to answer this question by looking ahead, starting with our new coaching staff and general manager.

New Men at the Helm

As many of you know who listen to our podcast, View from Section 323, I was not big on the hiring of Adam Gase. Mike McCarthy was sitting there and clearly wanted to be the Jets next head coach.  But from everything that I’m hearing and seeing at camp, I could be wrong.  Gase got a glowing recommendation from none other than Peyton Manning, and Sam Darnold seems to be singing his praises.  Can this finally be the “offensive genius” the Jets have been looking for the last 60 years?

When Gase was in Miami and Ryan Tannehill was healthy, he had him playing like a great quarterback.  Don’t believe me? Look up Tannehill’s stats from Gase’s first season as their head coach.  Ultimately, this hire will be judged on whether or not he can progress and mentor Darnold into the great player we want him to be.

Also on BuzzChomp: NY Yankees laughing all the way to World Series

The defense has a new coach as well. Gregg Williams’ intensity and drive to “get the QB” are legendary.  He’s got the ambition, philosophy and players to make that happen in New York.  When he took over the interim head coaching job with Cleveland they were just OK, but he was able to transition that defense into a beast and cause confusion for all opposing O-lines and offensive coordinators.  Let’s hope he can do the same here with a Jets defense that’s trending upwards.

Finally, new general manager Joe Douglas looks like a real deal hiring.  He helped build his Eagles team into a contender and eventually a Super Bowl winner.  Douglas has great experience and is already making invested moves with the Jets, like signing recently retired center Ryan Kalil who had been short of legendary with Carolina.  More importantly, he and Gase have worked together before and this was the guy Gase wanted, which can’t be said for the last two regimes. Douglas’ next big move will be with Jamal Adams and Leonard Williams, who both will be looking for major pay increases next year.

Le’Veon Bell is considered to be the best running back in the NFL.  I for one am stoked he picked the Jets during free agency, a team he rooted for as a kid growing up, watching the likes of Curtis Martin and Thomas Jones.  The real question is whether he will be the same player as he was in 2017.  Let’s be honest here, the current Jets aren’t the Pittsburgh Steelers of yesteryear.

New York’s O-Line is better than last year, and Sam Darnold has some outside weapons now which will help create running lanes. But can Bell be “Le’Veon Bell.”  If he can be that player, in my eyes, the sky is the limit for this team.  He says he wants to bring a Super Bowl to the Jets and that he is willing to touch the ball up to 500 times this year if necessary.  Let’s hope the body matches the spirit.  As my boy Rex used to say, “Ground and Pound, Baby!”

The New York Jets haven’t had a legitimate QB since Chad Pennington.  Yes, I still love Mark Sanchez and “Fitzmagic” was great for a year, but Sam Darnold is something different.  He’s the man that Jets fans have been waiting for since Joe Willie Namath rode off into the sunset 45 years ago.

Darnold didn’t have a great start last year.  His first ever NFL pass was picked off and returned for a TD against Detroit. A few weeks later he hurt his foot and passed the torch to Uncle Josh.  But, if Sam can play like he did the last four weeks of the season, the Jets will be competing for a playoff spot.  He was consistent with his throws, made all the appropriate reads, carved up defenses, and more importantly, did not turn the ball over.

This year, under a new offensive coordinator and coach, we Jets fans will be looking for Darnold to make the next step.  His camp has been awesome.  He’s connecting with his new weapons Bell and Jamison Crowder.  The immersion of Chris Herndon at tight end and the return of Quincy Enunwa at wide receiver will help him make even better decisions and keep his completion percentage high.  It’s always on the QB, and like Bell, if Darnold can keep up this trend, the sky’s the limit.

There’s no arguing that New York’s defense has one of the best front 7’s in all of football.  That hasn’t been a question for a number of years.  The issue has always been one of two things; who’s covering the receivers and how come they can’t get to the QB?  The Jets hope they have answered one of those questions with the 3rd overall pick out of Alabama, Quinnen Williams.  Williams was a football prodigy in college and was considered by many people as the best player in the draft.  He’s 6’3” and 305 pounds, yet ran the 40 in 4.87 seconds, one of the fastest times ever for a player weighing in over 300 pounds.  He’s a freak and a run stopping guru.

The Jets are hoping that by putting Williams in the middle, and even on the outside, he will create matchup problems for O-lines. Leonard Williams is also about to light things up in his contract year. He needs to be more consistent and get off blocks better.  The addition of C.J. Mosley, who most consider the cream of the 2019 free agency crop, will solidify New York’s defense and finally add middle linebacker into the fold.

The Jets haven’t had a legitimate threat at middle linebacker since Bart Scott.  Mosley is fast and physical.  Baltimore was one of the best defenses in the league because of him.  He’ll need to take an active leadership role and continue to develop the rest of the Jets linebackers who are relatively young.

You can’t mention New York’s defense without mentioning Jamal Adams, arguably the Jets best player.  He’s the best at his position and makes all the plays, but he can’t cover everyone.  Trumaine Johnson is now injured, adding extra pressure on Adams and New York’s other inexperienced cornerbacks.

New York has one of the easiest schedules in all of football, fourth easiest to be exact.  They’ll play the NFC East and the AFC North, with some tough games against the Browns and Steelers.  But the Jets also have some softies in there too.  Games against Miami, Buffalo, Oakland and Washington all spell well for them.  I’ll even be at the week 10 matchup against the Giants, which is always fun. This is solid schedule for an up and coming team.

What you’ll read next is probably the most optimistic I have been about the Jets in eight years… they’ll go 9-7 and be within one game of making a wild card spot.  I wouldn’t, however, put them out of the range of 10 or 11 wins if the team can stay healthy and Bell and Darnold play up to their potential.  I’m not thinking Super Bowl, but if they can beat Tom Brady and the evil empire and make the playoffs, I think most Jets fans would be thrilled about that.  In the words of Bart Scott, “CAN’T WAIT!”