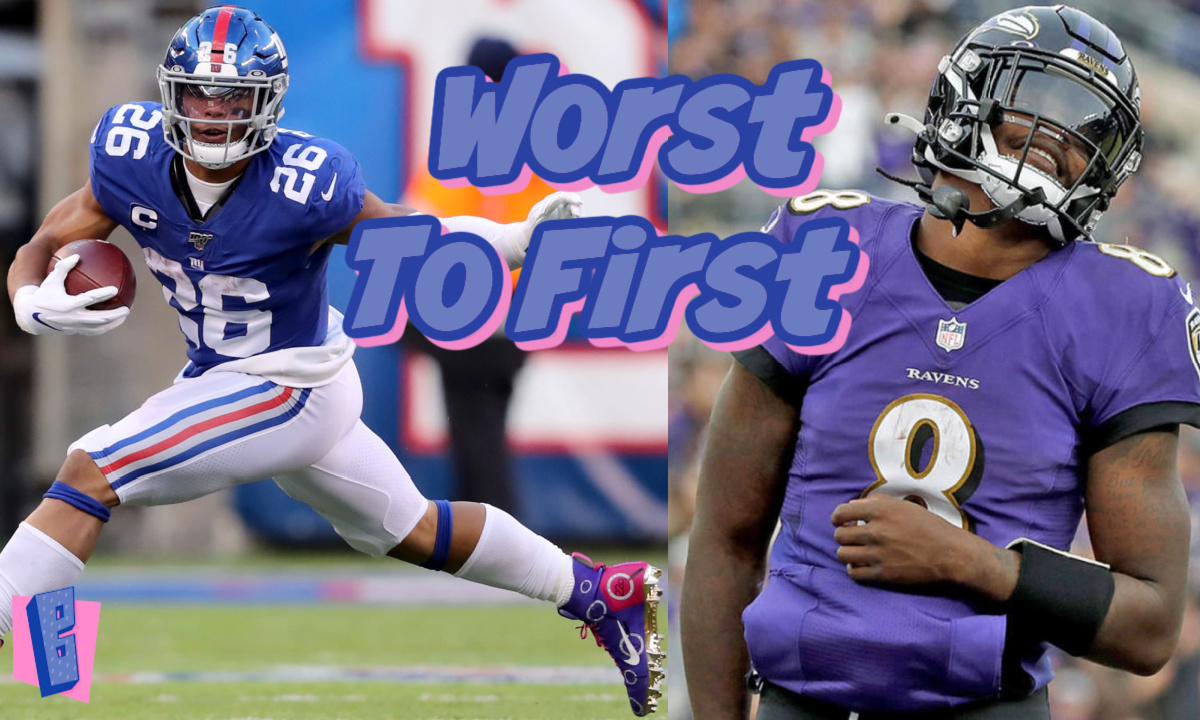 Is this the easiest year ever to pick Worst to First in the NFL? As many as three teams may do it, but only the Baltimore Ravens and New York Giants have their stars aligned. Its going to be a wild season.

Moving from worst to first. It seems outlandishly impossible. Teams don’t jump from being the very worst to being the very best in the league, conference, division, whatever. It is too tall a mountain to climb. That may be true in most sports, but it is decidedly not true in the NFL. Nearly every season, at least one team jumps from last place in their division to first place the following season. It speaks to the parity of the league and how closely matched all these teams are. The smallest of changes can make huge differences.

This past season, the Cincinnati Bengals made the jump. Worst in 2020 to first in 2021. The season prior, the Washington now-Commanders moved to first after being worst in 2019. So who will make the leap in 2022? Let’s first run through the contenders.

That is nine teams and… boy, this is going to be way easier than most seasons, isn’t it? Because of some drastic offseason changes, there will likely be a slew of major movers in the NFL. We can picture as many as three teams easily accomplishing this goal, with another three teams within reach. We have our pick of the litter! But which direction do you go? There is one safe bet that Todd simply can not pass up. A riskier pick, all be it a predicable one, is who Dan has his eye on. These two teams go from worst to first in the NFL 2022.

Is it a cop-out to pick Baltimore? The Ravens were a last-place team, but they finished 8-9, just two games out of first place. They also had the second-best point differential in the division. Perhaps most importantly, they were 8-3 to begin the year and finished things with six straight losses as the wheels came off and Lamar Jackson was sidelined. This team is barely removed from being one of the elites of the sport.

For all those reasons, picking Baltimore as a worst-to-first winner feels like cheating, but it is also the smartest bet. Jackson will be healthy heading into the season. Though the offense will need to find some play-makers on the outside, he covers a lot of foibles. The running back contingent should be back as well. Thanks to the Marquise Brown trade, among other decisions, they also had one of the drafts of anyone in the league.

Though it isn’t always the case, teams with terrible injury luck normally have a much better time of things the following season. It is one of the great equalizers that allows for worst-to-first (and vice versa) movement in this league. Teams can be submarined by injuries. Others can be buoyed by great luck with health. The Ravens were bombarded last year and, statistically, should have a much better time of things in ’22.

Those changes don’t guarantee a first-place finish in what could be the most competitive division in the NFL for the second year in a row. However, Baltimore easily feels like the best of the group of nine outlined above.

I’m betting that two teams make the jump from Worst to First in 2022. Baltimore certainly does it for all the reasons you mentioned, but also one more. Every other team in the AFC North lost something this offseason. Cincinnati had it all come together last year in near perfect fashion, so even a plateau means they likely fall to 2nd in the division. Pittsburgh and Cleveland both lost their starting quarterbacks for quite different reasons, but that amount of turnover hurts. The Ravens are better and healthy, putting them atop a division that was only decided by 1.5 games last season.

One other team makes the leap this year and it won’t be the Denver Broncos. I know my colleagues in the ‘3 Man Booth’ show here on BuzzChomp love Denver, mainly because of Russell Wilson. But I don’t see them conquering the league’s toughest division, at least not in year one with Wilson. That leaves only one other viable option for Worst to First.

The Jets won’t topple Buffalo. Seattle isn’t overtaking the Rams. Carolina won’t best Tampa Bay and the Lions aren’t taking down the Packers. Jacksonville has a shot, but they are not taking down both Tennessee and Indianapolis. Cleveland is a mess, which means only the New York Giants remain as a team on reasonably solid ground, in a division that is truly up for grabs.

Smart money has Philadelphia or Dallas winning the NFC East this season, but the Giants are a perfect example of health improving a team by leaps and bounds. Having a running game once again will make all the difference for New York and Daniel Jones is in a “contract year” so to speak, because he’s playing for his job. I don’t think it will be pretty and the Eagles appear really good, but the NFC East is notoriously even and full of turnover. The New York Giants can win the NFC East with ten victories. This feels like a down year for the Cowboys and I’m betting the Eagles fall a game short of New York on top. I don’t love the pick, but if a second team pulls it off, it’s the Giants.