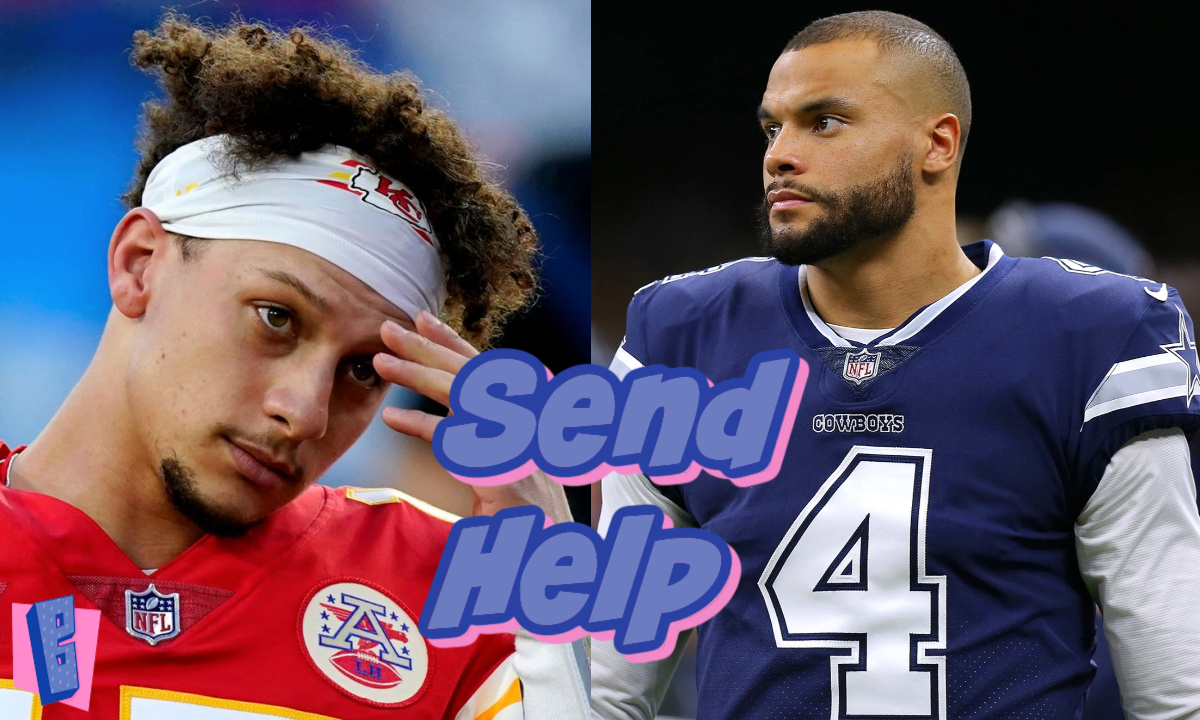 No one wants to admit defeat, but two teams will tumble all the way to the bottom in the NFL 2022. They were first, but now they’re worst. The Dallas Cowboys and Kansas City Chiefs have hard seasons ahead.

Earlier in the month, we outlined the teams most likely to make the perennial move of worst-to-first within a division. What about its first-to-worst brethren? Though it feels even less likely to occur, it is still something we see nearly every season in the NFL. In the NFL 2022, there are only two teams likely to tumble. Will we pick the same two teams as our 3 Man Booth colleagues? Watch and see.

The logic is the same with first to worst. Because teams are so closely bunched in terms of talent, swings of luck due to injury, fumble recoveries, records in one-score games, etc. cause teams to jump up and down in the standings year to year. Luck isn’t consistent; parity is. Last year, the Seattle Seahawks tumbled to last place after finishing first in 2020. The Baltimore Ravens almost made the slide as well, though their ’20 record of 11-5 was only good for a second-place finish.

The year prior, two teams made the plummet. Philadelphia won the East in 2019, only to finish last in ’20. The 49ers did the same in the West. The 2018 Chargers didn’t quite win the division, losing a tiebreak, but they dropped to last place the following season regardless. That’s history, so who’s next?

If one of the teams that finished first a season ago is going to drop to worst, who is it going to be? Nearly every division winner from last season returns their pro bowl quarterback in 2022. In addition, the last place teams are more or less still bad. Two teams stand out, as the Dallas Cowboys and Kansas City Chiefs tumble from first to worst.

I am ruling a few teams out from the jump. They may be worse; they could be bad if everything breaks wrong; but there are divisional teams so much worse that it feels impossible for them to drop to last place. That would be the Bills, Titans, Cowboys, Packers, and Buccaneers for me. That leaves only three teams, with one being the obvious pick.

The Bengals play in the most closely bunched division. They had the worst record among division winners a season ago and the fewest games above last place. We already sited how likely Baltimore was to jump from worst to first. It all aligns to have Cincy make the opposite flip. And yet, I think they’ll be better than they were! I think they’ll be better than Pittsburgh and Cleveland. Maybe Baltimore makes the jump up, but the Bengals won’t fall far.

Instead, my pick is the former league rulers, the Kansas City Chiefs. First, the division is very tough. Any of the four teams could win the division with some breaks. All consider themselves playoff-caliber for sure. Second, while their opponents have gotten better, the Chiefs have clearly gotten worse.

The offense has to retool around a new receiving corps, an aging Travis Kelce, and an injury-prone running back room. The defense has been leaky to boot. It finished with the second-worst sack rate and gave up the fifth-most yards per play in 2021.

The only reason to pick the Chiefs to have another great year is betting on the infrastructure of Mahomes and Reid. That isn’t necessarily the wrong move, but their window may be closing. It is hard to stay on top for long, and KC has done it longer than most.

You ruled out several teams because of divisional peers, but I’m ruling out teams because of their winning track record. Kansas City keeps overachieving and overcoming a less than spectacular defense season after season. There’s a good chance they finish second or third, but not last. Same with Cincinnati and Tennessee. Both have been consistently good and have quarterback stability. I don’t see the Browns and Steelers both beating the Bengals. Nor do I see Houston topping the Titans.

As for Tampa Bay and Green Bay, until they lose their hall of fame quarterbacks, they are not coming in last. Los Angeles could miss the playoffs, but won’t be in last either. So who is it? Dallas or Buffalo? Can the New York football teams finish ahead of the Cowboys and/or the Bills? While I believe the Jets get significantly better, Josh Allen is simply too good for Buffalo to slip behind all of Miami, New York and New England. The same cannot be said of Dallas.

The NFC East is notoriously average, with the division winner changing on a yearly basis. Philadelphia is going to be very good and Washington may or may not have a quarterback upgrade, but at the very least retains its solid defense. New York has added a ton of fresh talent and hit reset on the sidelines, meaning an improvement is imminent. I even went so far as to pick the Giants to jump from worst to first. That leaves Dallas and their lame duck head coach.

The Cowboys have an excellent quarterback, but the rest of the team is full of question marks. Can Zeke stay healthy this ‘late’ in his career? Did Dallas actually improve their defense and Dak’s supporting cast? Most pundits agree the Cowboys’ draft was below average, leaving them in a dogfight with three other up and coming teams. I’m picturing another season of average at best with the records reading 7-10, 8-9, 8-9, 9-8 in the NFC East and Dallas on the bottom. Considering their lofty expectations every single season, it’s unlikely their head coach survives the year.