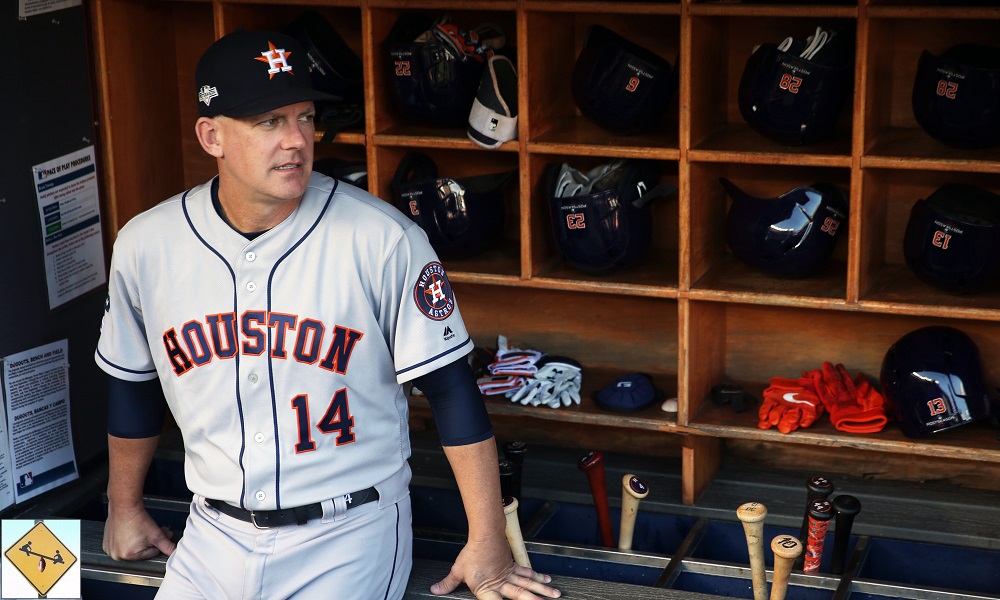 Everyone loves a scandal, so what’s the best thing for baseball during its slowest time of year? An MLB scandal of epic proportions! There’s nothing better for the game in the long run.

Major League Baseball is trying its best to remain relevant in the winter months. We had awards week this past week, followed by the 2020 Hall of Fame ballot announcement. There was even a relatively big signing early in the offseason (when Atlanta signed closer Will Smith). Yet something else topped the charts and has us itching for more baseball!

Those things alone are not enough to convert casual fans to following baseball 12 months a year, but they do bring happiness to baseball fans and keep the sport going throughout the offseason. However, we cannot possibly avoid mentioning the MLB scandal and investigation into the cheating done by the Houston Astros over the past three-plus seasons that includes two World Series berths, one world championship, and some of the craziest home-road playoff splits we’ve ever seen.

That is a story usually swept under the rug: something sport-related but more buzz-worthy than normal play. It’s an attention grabber that MLB usually tries its best to keep on the down low, because it doesn’t showcase baseball as America’s pastime or represent it as something special/nostalgic to be awed by. But this MLB scandal is fascinating, deep, and could actually help the league. It’s funny to think that a major cheating scandal would be good for the sport, but it is hard for baseball to catch eyeballs of casual sports fans.

Rocco Baldelli robbing Aaron Boone for AL Manager of the Year doesn’t cut it. Even Mike Trout capturing a third MVP award doesn’t really move the needle. I’m sure people in the league office are horrified by the Houston story and what it might lead to, but this timing is actually good. It helped fill in some schedule blanks. We went from regular season play to the postseason to awards to Hall of Fame voting and scandal, which holds us over until the winter meetings.

Normally absent scandal, I’m of the opinion that the baseball Hall of Fame is as close as baseball gets to being buzzy. It’s the best Hall of any of the American sports and arguably the most sacred. People care about it (even after Harold Baines got in). It is more important than the football Hall of Fame, which doesn’t even seem to have criteria anymore. And it is much more discerning than the basketball Hall, which allows everyone in who’s even remotely had an impact on the game.

Also on BuzzChomp: NBA Super Teams on the Ropes Already

This year’s ballot is pretty shallow. Derek Jeter is going to get in on his first try and may join former teammate Mariano Rivera as being a unanimous selection. He should also be the only first-timer to get elected. I find it hard to pick even a second first-timer with a legitimate shot years down the line. The best are probably Cliff Lee and Bobby Abreu. I could see zero players on the 2021 ballot on their second year, meaning all of the 2020 first-years are elected immediately (Jeter) or fall off the ballot entirely (garner fewer than 5% of the vote).

That means this is a big year for clearing out holdovers. Barry Bonds, Roger Clemens, and Curt Schilling all remain as likely HoFs if not for extenuating circumstances. Larry Walker enters his 10th and final year on the ballot. We could see all four of these guys finally get in with so few votes going around to new players.

Those inclusions would be news-worthy for sure. That won’t happen until January though. For now, we discuss our ballots and then await repercussions for the Astros. Is it wrong that I am giddy thinking about how severe their punishments could be? My expectations are tempered because this isn’t the NCAA. Rob Manfred isn’t going to vacate titles. But we don’t even know how deep or widespread their cheating went. This could be a banner scandal. Just what the MLB offseason needed!

It feels strange to celebrate scandal, but I too love the ax coming down on Houston’s head. Perhaps its because the Astros eliminated the Yankees in the ALCS during both seasons in which they made the World Series. Perhaps its because Houston was caught cheating this very year against the Yankees, yet for a much more minor infraction. Yet I’m truly excited to see what happens, because their level of cheating goes way beyond anything we’ve seen in sports.

Baseball has unwritten rules and they make the sport great. Players and managers actually attempt to follow them, unlike the NFL where everyone tries to cheat and not get caught. Houston’s scandal appears akin to the Patriots getting caught filming the opposition’s sidelines and watching it back to steal plays. Yet that practice was not unique to New England and every NFL coach covers their mouth when relaying plays to their quarterback because THEY KNOW everyone in football is trying to cheat. Baseball is literally the opposite, so when the Astros filmed catcher’s signs with a center-field camera and then had a monitor in the dugout to watch them, they literally broke the game in half. You simply do not do this.

In baseball its considered smart and savvy to figure out the opposition’s signs and relay them to your teammates. That’s the job of a player on second base. But using technology to do this is unprecedented. The advantage gained is nearly impossible to quantify. We saw what MLB did to the St. Louis Cardinals two seasons ago when they were caught hacking the Astros scouting system. Two million dollars, two lost draft picks, and several lifetime bans later and the Cardinals are forgiven. But this is infinitely worse!

There seems to be hard evidence that condemns Houston in this MLB scandal. Witnesses are coming out of the wood works and speaking against what was done as recently as this very postseason. One of the primary members of the Astros’ coaching staff from 2017 is now the manager of the Boston Red Sox. Does this practice of cheating go beyond Houston’s dugout? That part seems unlikely, but with hard evidence comes hard punishments.

I expect the Astros’ manager to get a lifetime ban, along with any other coaches that facilitated and executed this cheating. Houston will also lose draft picks, but its unclear where they would go. A hefty fine will also be levied. This is the precedent that was set before. What’s unknown is any team compensation, if MLB can prove that the Astros hurt one team in particular by cheating. Look for this story to have legs well into 2020.