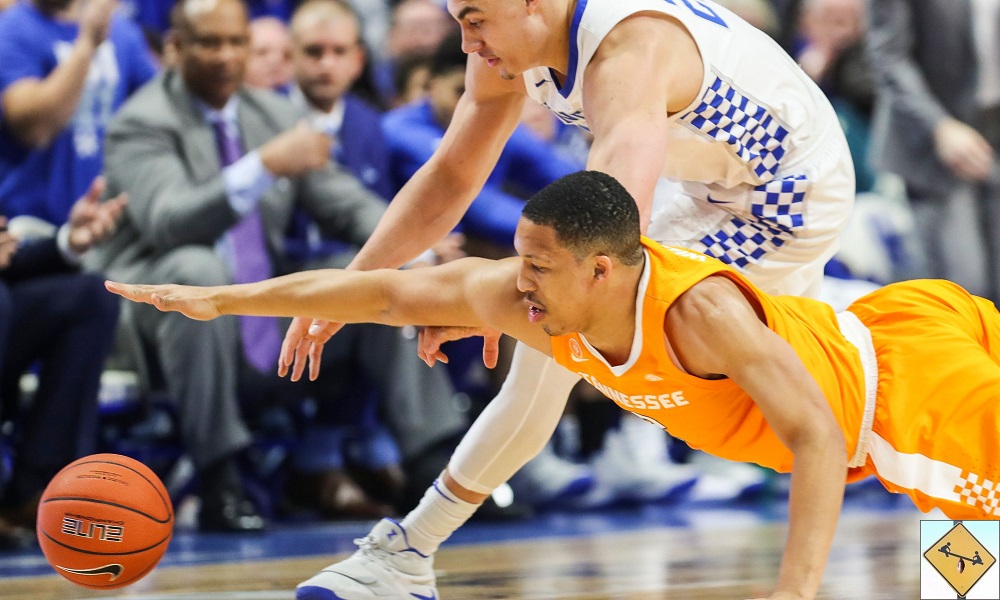 Duke was supposed to be Goliath in March Madness 2019, with every other team hoping to take them down. Tennessee ruined things before the tournament tips off, leaving fans wondering who the real favorite is.

With a month left until the NCAA Tournament, the college basketball season has been a mix of the expected and the unexpected. Everyone thought Duke would be dominant, and it has been. No one thought Tennessee would be this good. Rick Barnes is seriously coaching the (former) number one team in the country. Tennessee just dropped to fifth after losing to Kentucky over the weekend, with Duke vaulting back into the number one spot. The rest of the top five is as chalk as can be: Gonzaga, Virginia, Kentucky as of week 16. The rest of the top 10 hardly is, with Nevada and Houston both representing and Marquette sitting at 11 after falling one spot from last week.

This year, the NCAA selection committee released an early top-16 projection for the tournament. I don’t know why it did this. Apparently, this is the third year such an exercise has taken place, though I don’t remember this happening before. Don’t confuse this seeding with “bracketology” around the web. This was a list of the top four seeds in each region created by the people who will make the actual March Madness 2019 tournament field a month from now.

However, it is almost as pointless as the made-up brackets on the web. Too much will happen between now and then. All this does is tell us the committee devalues Nevada a little more than the AP voters do.

One comparison I find fascinating is the one between Duke and Virginia. If you were going by blind resume, the Cavaliers may be the better team. They are 23-2 (as of 2/19/19), with seven wins over top 25 teams (ranking at time of game being played). They rank in the top five in both adjusted offensive and defensive efficiency according to Kempom. Their lone losses came against the number one and number two ranked teams in the country. Compare that to Duke. The Blue Devils also have over half a dozen top-25 wins (eight to be exact). They also rank in the top five in offensive and defensive efficiency. These are the only two teams in the country to do so. Duke has two losses as well, but one came at home against an unranked opponent. That loss alone has to drop them below UVA. Until you un-blind the resumes and see that both of UVA’s losses came against Duke. What fun!

After the first game of the year, I thought Duke was the best team in the country. I still feel that way more than three months later. It has elite athletes across the entire lineup and excels both offensively and defensively. After the novelty of the roster has worn off, three of the top five picks in the NBA Draft this year could still be Blue Devils.

To me, it kind of feels like the Volunteers have ruined the story of this season a bit. Instead of Duke being the runaway number one team all year and having the target on its back for the NCAA Tournament, it isn’t even the best team according to voters. The Blue Devils may be number one this week, but voters have used every opportunity to supplant them. Tennessee was number one until falling to Kentucky, so who will get voted ahead of Duke next? Regardless, this jockeying sours the regular season. Imagine if Alabama had had its same football season, but everyone just thought Clemson was better before the teams even played. When the Tigers defeated the Tide in the national championship, it was the knife in the chest of the country’s dominant force. That feeling wouldn’t have existed. Basketball won’t have that story line. Duke is just another contender.

Tennessee has absolutely ruined Duke’s perfect season! The Blue Devils are not undefeated, but as we wrote at the start of the season, they were the runaway favorites to win the NCAA Championship and cut down the nets following the Final Four. I loved the fact that Duke even had a shot at being undefeated. Because that shot is long gone, the consolation prize for fans would be the Blue Devils entering March Madness 2019 as heavy favorites. While this is technically still true, it’s not even a storyline any longer. Thanks a lot Tennessee!

Do you give Tennessee a real shot at winning the NCAA tournament? Should fans risk their money on the most unexpected favorite entering March Madness 2019? Chalk usually prevails, meaning three teams should be considered favorites. Duke, Gonzaga and Virginia are all great. Tennessee remains an enigma. The rest of the current top 10 is even more unsettling. Perhaps we can easily trust Kentucky, but I have little confidence in the likes of Nevada and Houston. Regardless of how you feel about these teams, we are devoid of a prohibitive favorite heading towards March Madness 2019.

Can anyone stop Duke? This was supposed to be the question of the tournament. A run by Tennessee to the championship will not be a shock. Chalk in the Final Four will not be a shock, but it will be somewhat disappointing. With cross hairs pointed at Duke, its okay to have chalk surrounding them in the Final Four. We want someone to beat the Blue Devils, and the best teams have the best shot at taking them down. Virginia failed twice, so you bet it would be exciting to see them try again. Yet the cross hairs are not pointed at Duke. We lost the narrative surrounding them and all of the drama that goes with it.