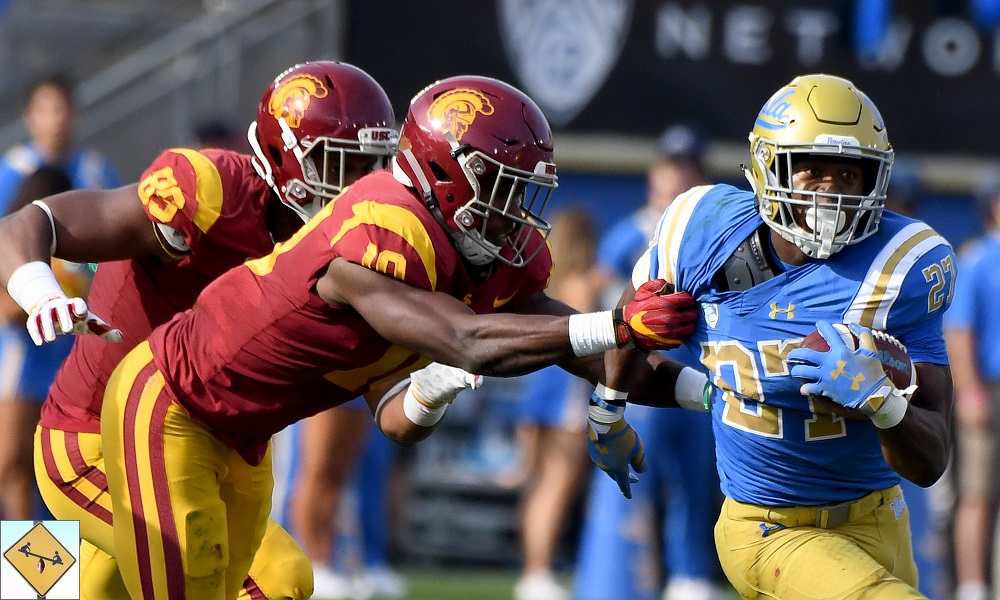 College athletes in California will soon earn money off their image. Fair Pay to Play ensures this, but also causes turmoil for the NCAA. They must change or crumble.

This past week, the state of California passed a bill that will prevent collegiate athletes from being punished for benefiting from their own likeness. In other words, California NCAA stars will be able to sell their autographs, pictures, etc. and legally keep the money. Fair Pay to Play.

The only issue is that this strictly goes against NCAA rules that prevent those same athletes from gaining any compensation in such ways. Will this bill, titled the Fair Pay to Play Act, bring lawsuits? Will it bring down the foundation of the NCAA? Or will it be overturned before 2023 (the year it is supposed to be enacted)? We at least know the answer to the first question will be yes.

Where do you stand on the Fair Pay to Play Act? It only seems right that college athletes can benefit from their own person and likeness. That feels like it should be a baseline qualification of being in the public eye. Yet the NCAA has always prevented any above-board compensation.

When the idea of paying college athletes comes up, detractors always slightly tweak the subject. They don’t say we shouldn’t do it, but instead say it isn’t feasible to do. Or it will punish less popular sports. Or it will undermine the sanctity of the NCAA (heh). But allowing athletes to earn whatever they wish off their own image solves all those issues.

Though there are going to be dozens of stipulations and requirements, the colleges will not be responsible for the payments. This doesn’t involve them paying the students in any way. Check one. It doesn’t punish anyone either because there is no reward system. It is just the open market on popularity. Few players will benefit; only the most deserving. Everyone else will remain in the same boat they are now. Check two.

Ruining the scaffolding of the NCAA sports system shouldn’t happen either. There will still be monitoring. A high-school player won’t be paid $400,000 for his autograph with the understanding that he would attend a certain university. That would be just as sketchy as it is now under the table. Perhaps agents will attempt to arrange more beneficial opportunities for students who go to the “right” schools, but that still won’t help if the student isn’t a player worthy of such an opportunity. You can arrange all the paid photo sessions you want with a “star” cornerback for an SEC school. Those guys aren’t selling out event spaces if the sessions are no longer free for fans.

How do you think this all plays out over the next few years? I’m sure there will be tons of loopholes brought up and scrutinized. The important thing, in my mind, is that California has passed this in the first place. Let’s make some positive changes to something as stupid as NCAA athletics and work on fixing the issues with those changes after the fact.

I love the idea of the Fair Pay to Play Act in principal, and its certainly an excellent first step towards moving college athletics out of the stone age. Allowing players to earn money off themselves solves a ton of issues that would arise from colleges directly paying players. That being said, a few key issues immediately come to mind.

Because this act passed first in California, lets use USC as our example. With athletes able to earn money off themselves, which is a no-brainer in itself, now USC becomes the go-to college for future stars. Think you have name value? Believe you are destined to be a first round pick? Are you a highschool All-American? Now you can sell merchandise, get sponsorship, and promote yourself however you want on Instagram etc. as long as you come play for USC. You lose out on all of this if you go to Alabama, so what do you say? USC all the way.

The same “advantage” exists for UCLA and any other school in California that is even remotely desirable. Athletes get opportunities by playing for a California university that do not exist anywhere else. Unless the NCAA unilaterally enacts these new Fair Pay to Play rules, which they should, then the recruiting advantages are obvious. Its like the lack of income tax in Florida that sways professional athletes at times, except in reverse and on a much larger scale. We are talking literally zero to unlimited for a future star that knows they will be a star. LeBron James skipped college because there was no point in going. Now that player can go to college and get paid, but only in California.

This is obviously not California’s fault and being a trailblazer is hard. Which brings me to my other issue. How exactly do these athletes receive their money if the universities are unable to be an intermediary without violating the current NCAA rules? Something more has to change. Giving players agents in college creates a ton of unforeseen issues, but they are going to need them. We likely get a ton of student athletes with managers, or parents being managers, or a “team manager” not officially employed by the university. This too creates problems for the NCAA.

In case you missed it: Adam Gase officially on Hot Seat

Players will need representation to advise them on endorsement deals. Otherwise we’ll end up with tons of lopsided deals that screw the athletes, because nobody knowledgeable was involved in negotiations.

There are A LOT of grey areas that need clearing up with Fair Pay to Play. Yet the act itself is a major win for college sports and athletes in general. Some players star in college and never do so on a professional stage. Now they can profit during their peak years, which just happen to be earlier in life. We are making progress, no matter how sloppy it is.