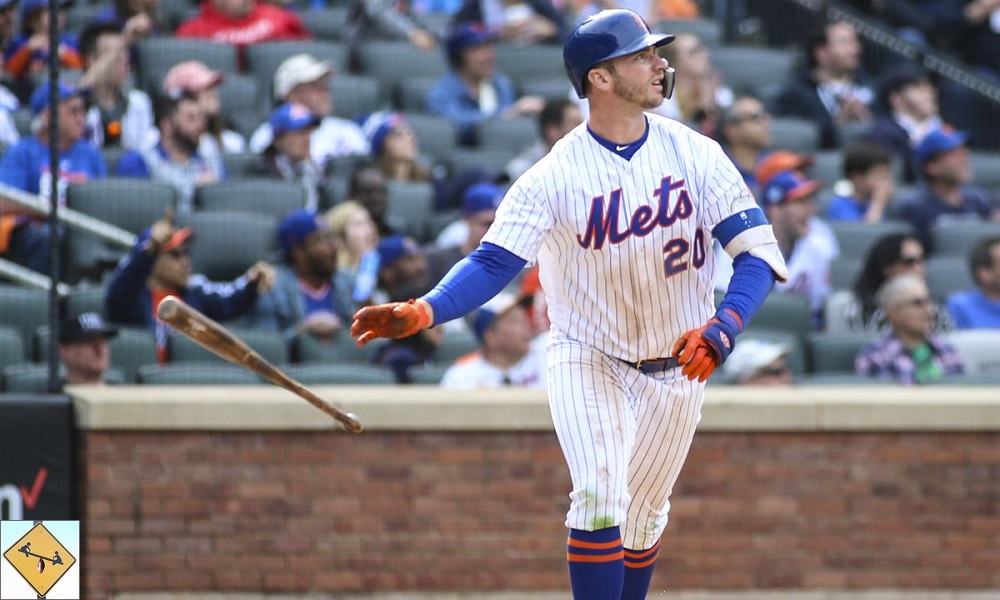 Home runs and strikeouts are way up this season, but are these wild MLB stats the new normal? With so many new players leading the league, at least Mike Trout is still great. One thing makes sense.

The MLB standings are something to keep an eye on these final eight weeks. But individual players need watching as well. Some are having very interesting seasons and the MLB stats have gotten wild. There are some truly unexpected names among the season leaders. (All stats that follow as of July 29.)

If we look at hitters to start, the baseline ratios for having a great season are .300/.400/.500. With Mike Trout currently batting just .297, even he falls short (for the moment) of that pristine benchmark. There are only three players that meet that distinctive plateau in each batting ratio: Christian Yelich, Cody Bellinger, and Anthony Rendon. And then there’s Jeff McNeil. McNeil was not an elite prospect because he doesn’t have much speed or much power. He was just a solid bat. Well, his solid bat is playing up. McNeil is currently second in baseball in batting, has a .397 OBP (just shy of that .400 mark), and is slugging .507 despite only hitting 10 home runs. He has steered away from the launch angle revolution. As his league peers attempt to hit everything for a home run, McNeil is hitting everything else. He has the fewest home runs of anyone in the top 75 in OPS, and he ranks 21st in baseball.

McNeil seems to be the exception that somehow proves the rule though. Everyone else is homer crazy. Pete Alonso is setting rookie records. He already has 34 bombs. Padres’ boppers Hunter Renfroe and Franmil Reyes are homer machines. Renfroe has 29 HRs and just 76 total hits; Reyes has 26 in 79. Jorge Soler’s previous career-high was 12. He’s already at 28. Dan Vogelbach never played in more than 37 games before this season. He has 25 home runs before August. As a part-time player, Renato Nunez had a previous high of 8. He has 25 right now too. Hopefully you get the idea because I could keep going and going with this.

On the pitching side of things, there have been a lot of struggles, as you would expect with the way the ball is screaming through the air. But strikeouts are also up higher than ever. The three true outcomes reign supreme. Justin Verlander is eighth in the league in ERA and number one by a comfortable margin in batting-average against. And yet…he’s also the very worst in MLB in home runs allowed at 28. No one can hit off him, but when they do, it often goes out of the park. Verlander may be the epitome of this era of baseball, with his 183 strikeouts in 144.2 innings.

The upper-echelon of starting pitching used to be 9.00 K/9. Averaging a strikeout per inning was something only the elite starters did at their workload levels. As workloads have come down, that bar is almost meaningless. There are 30 qualified starters who are above that threshold and oodles more who don’t have enough innings to qualify. There is some question of whether these trends are good for the league or not. I prefer to focus on the individuals and how they are adapting. Charlie Morton, for example, has turned himself into a strikeout machine. He is one of the best pitchers in the American League after not being very good for the first nine years of his career. It’s wild.

Also on BuzzChomp: These 7 MLB Teams must throw in the towel

There isn’t one formula though. Hyun-Jin Ryu is one of the best arms in the NL. He became this by nearly eliminating walks and giving up fly balls on fewer than 25% of contact. Mike Soroka, another surprisingly dominant pitcher this season, ranks third in the league in fly-ball percentage. (Ryu is fourth.) Both pitchers also give up soft contact at high rates, limiting the damage any ball in play should do. I don’t know what to make of some of these changes. For example, giving up fewer fly balls isn’t necessarily up to the pitcher in many situations. Soft contact can be, be it can also not be. Some of the very worst pitchers in giving up hard contact are also the best guys in the game this year, like Shane Bieber or the aforementioned Verlander.

It feels safe and comfortable seeing that Mike Trout is first in baseball in offensive WAR. That means not everything is crazy. But seeing the home run numbers, how certain pitchers are adapting and others are not, is its own type of interesting. It isn’t comfortable or normal by any means. It also may be bad for the aesthetics of the game, but try telling that to the guys who are learning how to play and thriving in this environment.

Baseball has been slowly transforming over the last five years or so, but its not done. Most of the major sports are changing, but baseball puts it right in our faces. The players are always in one on one matchups; batter versus pitcher. This means the wild numbers and crazy MLB stats we are seeing this season don’t get offset by anything in particular, because the action on the field is not fluid. I’m all for a more exciting game of baseball, and the home runs and strikeouts certainly give us just that.

There were rumors of MLB “juicing” baseballs, or simply altering them slightly to increase scoring. This is easily accomplished, and more home runs leads to more strikeouts and more excitement. We already know that MLB tweaks its equipment during the offseason, so this may be more fact than fiction. Higher scoring games are more fun to watch, even if they take a littler longer. MLB failed at speeding up the pace of play last season, so perhaps they opted for making the experience more fan-friendly. Whether or not they directly meddled with the game, we must acknowledge the success that players are having this season and the wild MLB stats that have followed. No one can take that away from them, and everyone is playing the same game.

We’ve been asking each season this decade if the trends we see have sticking power. The youth movement has proven a reality, and a permanent shift in player contracts also appears here to stay. Despite the increase in home runs and strikeouts in 2019, I’m not convinced this marks a new phase of the game of baseball. Scoring feels like it is up, but we can’t truly know until the season concludes. Analyzing any baseball statistic in a small sample size leads to skewed results. Even two thirds of one season is too small a sample. The increase in home runs and scoring feels like a permanent fixture, but the strikeouts feel more anomalous.

As someone who considers himself a baseball fan, its disconcerting to look at the leader boards of varying MLB stats and not recognize a large number of the players. Mike Trout certainly makes me feel better, because I know him and I know he is great. It is challenging to follow a sport that lasts seven months and also turns over its best players each season. This is not to say that the great players from 2018 are playing poorly this year. Quite the opposite is true, yet they are not leading statistically. Thank you Mike Trout and Justin Verlander. We can count on you.