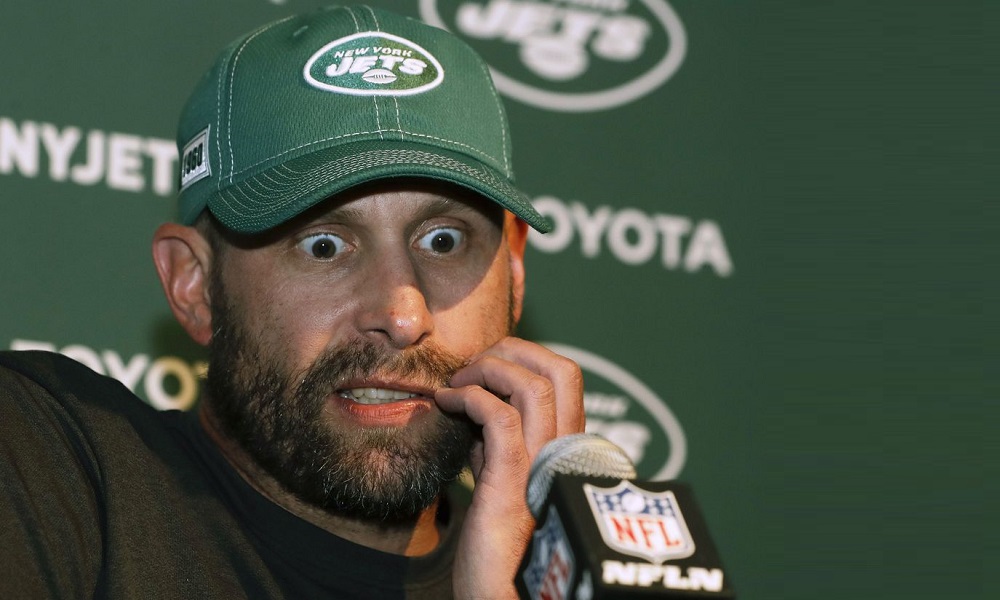 The New York Jets’ latest loss felt like a TKO delivered by head coach Adam Gase. After three great weeks he took one off. What a prick.

Let’s all take a step back into reality.  What makes Adam Gase a prick? Being completely unprepared to face an inferior opponent during Week 13 of the season is an excellent starting point. Spitting in the faces of New York Jets fans ices the cake. New York doesn’t simply lose and Gase didn’t simply make mistakes. They both keep getting humiliated.

After a terrible start to the season, where New York lost seven out of eight games, the Jets took major steps toward looking like a competitive football team. Adam Gase helped put a stop to this as New York showed its true colors versus Cincinnati.  They played us for fools.  The Jets made us think they’d turned a corner.  New York legitimately put together three games which showed what their offense, this team and coach Gase could accomplish.  What a goddamn joke.

For what it’s worth, we did witness history on Sunday.  Yet once again the Jets were on the wrong side of things. Until Sunday, at no time in the history of the NFL, which spans 100 f**king years, has a team lost to two teams with a record of 0-7 or worse during the same season. Congratulations Adam Gase, the Johnson family and all of those who are involved with this dysfunctional, disgraceful, pathetic, lifeless, piece of crap organization. You did it.  You somehow found a way to hit a new low.

Sunday was something that no one expected, not even the experts.  A team that had not won a game all year dominated the Jets. A team that just put back in their original starting quarterback, Andy Dalton, after benching him four weeks ago ended up dominating New York.  The Jets showed no heart, with zero organization or discipline.  They were called for 10 penalties that resulted in over 100 yards lost and a safety.  Make no mistake about it; this team was not prepared to play.  This has been a reoccurring theme this season for a team that came into it with so many expectations.

The Jets (4-8) took the Bengals (1-11) for granted.  They thought they’d show up and win the game.  They thought that NFL games were played on paper. With the way this team had been playing the last three weeks, New York just figured they would win.  It’s troubling that we are seeing the same mistakes made over and over again.  You would think that this team would be progressing, especially after what they did the previous three weeks. The Jets obviously did not get that memo.

A lot of this falls on coaching, and god knows how much I can’t stand this coach.  A rookie coach that had yet to win out-coached Adam Gase.  He didn’t have his team ready to play.  The Jets made no adjustments at halftime and made too many mental errors, two things that have been a thorn in the side of all Jets fans dating back to the last coaching regime. Halftime adjustments feel like something every coach should do, but the Jets keep hiring people who fail to make them.

There’s only so much Sam Darnold can do.  He was protective of the football and made good decisions, but when your offensive line can’t block and your receivers cant catch, what is he suppose to do?  In a game where the Jets didn’t have a single red zone attempt, against a team that was ranked last in defense, perhaps mixing it up might help. Run the football to open up the play action more, then try some gadget plays to utilize the speed of players like Robby Anderson. Unfortunately, what transpired was a joke.

The more intriguing factor to emerge from this particular game is the clear disconnect between Coach Douche bag and running back Le’Veon Bell.  Against the worst rushing defense in the league, this idiot only decided to put the ball in Bell’s hands five times in the first half.  How is that even possible?  Are you game planning coach? There’s a reason you were fired from Miami. It was also clear at the beginning of the year you didn’t want Bell on team, but not using him to the detriment of the offense is foolish.

Is there some underlying issue with Bell?  Perhaps his usage is a product of a bad offensive line that simply can’t create the holes necessary for success. Perhaps he’s becoming a washed up old running back, or is Adam Gase just not a fan and decided not to use him?  Could it be a product of all three?  Well guess what, Bell is making a guaranteed $14.5 million next year. Can this possibly be the beginning of the end for Bell in New York after only one season?

Also on BuzzChomp: Healthy Tips for the Holidays

Unless someone is willing to pick up his contract, Bell will be on the team next year. Yet it wouldn’t surprise me, considering how dysfunctional this organization is, if he’s gone.  What a complete waste of talent.  The defense was also wasted against Cincinnati. After putting together two great performances, they made quarterback Andy Dalton look like Joe Montana.  There was no tackling, no coverage and no pressure. Greg Williams tried to cover the holes in his secondary by playing zone for what felt like all game, but they got carved up. He must be lumped into this awfulness just as much as Gase.  And where was Jamal Adams? Is he truly injured?

Make no mistake, this team is garbage.  We knew this a month ago, but got tricked in subsequent weeks. Next the Jets play a much improved Miami Dolphins team with “Fitzmagic”.   I don’t see this going well, especially if Fitzpatrick has a game like he did against the unraveling Philadelphia Eagles.  Expect New York’s corners to be exploited big time and the offense to not do anything once again.

As cousin Eddy would say, “It’s the gift that keeps on giving the whole year Clark.”  Merry F**king Christmas, with a not so happy new year. There’s little hope for success, but for some reason I keep watching. PREDICTION: Dolphins 28 – Jets 13