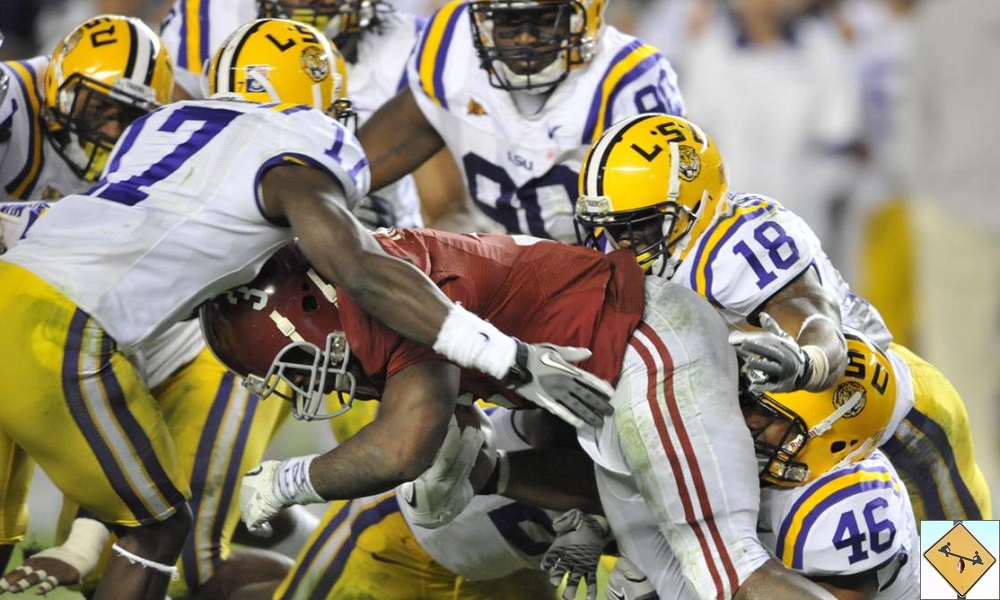 Usually we have a clear picture of the College Football Playoff field. Usually college football rivalry week is of little consequence, but this season is turmoil. The CFP is up for grabs no matter who wins.

This week is college football rivalry week, meaning all that remains after this week are conference championships to decide who plays for the national title. Though the intrigue builds week upon week, the top four normally works itself out, with, at most, five teams vying for the four spots.

It doesn’t look like 2019 is going to cooperate like that though.
Obviously, wrenches can be thrown into the proceedings to create all kinds of doomsday scenarios. If so-and-so gets upset, that opens the door. If all these heavy favorites go down, then so-and-so can rise. That’s nonsense. I’m not talking about that. If likely outcomes happen this season, we are in kind of a pickle. That’s the difference.

More BuzzChomp: The Mandalorian and Baby Yoda are Fugitives

Ohio State plays Michigan and then perhaps Minnesota in the Big Ten title game. It will be 13-0. Clemson faces South Carolina and then either Virginia or Virginia Tech for the ACC title. The Tigers should be 13-0. That’s two spots. A Pac-12-winning Utah would be 12-1 with an okay loss but few notable wins. A Big-12-winning Oklahoma would have just one loss also, albeit a weaker loss. And then there’s the SEC.

LSU is undefeated but still has to play Georgia in the conference title game. Georgia has perhaps the best wins in the country but a bad loss to go with it. A title-winning LSU would obviously be in the playoff, but I could see a title-losing LSU in as well. Teams hate to lose late, and there’s no way to time a loss worse than that, but the Tigers’ resume would still be incredible. And their only loss would be to a top-five opponent.

Then there’s one-loss Alabama, who still has the Iron Bowl remaining and arguably the “best” loss a team can have. If Alabama wins this week to finish 11-1, with its only loss coming against the current best team in the nation, where does this squad fit in? The Tide have a weaker resume than normal, but do they get any benefit of the doubt? Does Tua’s injury change the math?

Those are our seven realistic playoff contenders. Yet we can’t even narrow it down to six just because two are playing each other. As I said, a losing LSU could still get in. In fact, if LSU loses, it should still get in over Alabama. But do either of the SEC contenders who don’t win the conference title get in over a Pac-12 or Big-12 champ?

The easiest outcome for the committee still poses the same problem. That’s what makes this year so intriguing. The easiest outcome is all the favorites win out, and three teams are gimmes into the playoff. But then we’re left with the final-spot debate between Alabama, Oklahoma, and Utah. That won’t change unless a massive upset (or two) occurs.

The trickier outcome would be following an LSU loss in the title game. That puts two more SEC schools into the discussion and only two playoff locks. Georgia would seem like a lock at that point, but it has the worst loss of anyone.

The outcome we don’t want is the feeling that maybe Alabama is set up better by sitting out the title game. It has happened before and continues to be the most awkward part of the voting process. The committee has made it clear that there is no set criteria. A team doesn’t need to win its conference…but don’t we still feel like it should?

Despite the committee stating that there is no set criteria and a lack of a conference championship is not a hindrance towards making the college football playoff, we know the opposite is also true. That statement is what they have to say in order to remain neutral and remove bias. College football rivalry week is in fact critical. But everyone knows that winning your conference also provides a little something extra, even if it technically only represents one extra win or good loss on your resume.

Technically a loss early in the season is weighted the same as a late loss, but it would be naive and foolish to assume that every voting member of the committee is able to completely ignore recency bias. The same is true of winning your conference championship. Not only does it add a gold star to your team’s resume, but recency bias is bolstered with an extra win or very good loss. Not playing can help only if your competition loses badly. Otherwise, its out of sight and out of mind. This fact sheds light onto what we can expect as the season ends.

Ohio State and Clemson are making the CFP this season. Its safe to assume neither will lose. Its also safe to assume LSU wont lose badly, if it loses at all. This “good” loss does not hurt their qualification into the playoff. I’m willing to lock in the top three spots and don’t particularly care about arguing over seeding. This leaves one final playoff spot for four teams. Let us assume Utah wins the Pac-12 and Oklahoma wins the Big-12 respectively. Alabama also wins its final game. Georgia winning or Georgia losing provides the same CFP outcome in my opinion.

Who had a “good” loss? When every team has one defeat, that is the first question to be asked. If Georgia loses the conference championship, then they are eliminated. A Georgia win leaves them with one “bad” loss this season. Utah has an “okay” loss, while Oklahoma has a “pretty bad” loss on its resume. Alabama has a “good” loss. I think you know where this is going.

The Crimson Tide are like the Dallas Cowboys and New England Patriots of college football all wrapped into one. If their only loss is to the SEC champion and number one team, then they get in. The only way Alabama stays home is if Georgia blows out LSU, but that is rather unlikely. Assuming everyone wins out, we get a rather chalk final four: Alabama, LSU, OSU, and Clemson.