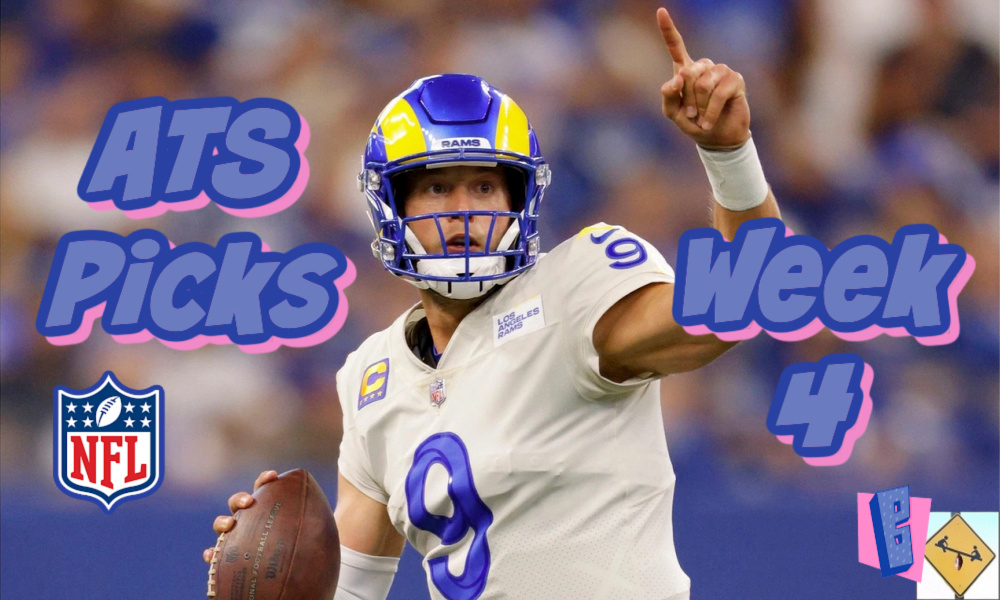 It’s time to roll the dice in NFL Week 4. Jump on these obvious miss matches and take a chance on the Giants. Your best picks against the spread.

We are just three weeks into what will be the longest NFL season in history, thanks to the expanded schedule. Even still, early results have been…weird. Maybe we can chalk it up to having less preseason preparation and essentially no preseason reps for the regulars. Do we throw out the first few weeks because of that uncertainty? The mantra used to be not to overreact to NFL Week 1. Will it become even more pronounced as the years go on, meaning we can’t take any September results as impactful or overly meaningful?

If we are to believe what we’re seeing, the Kansas City Chiefs and Indianapolis Colts are last-place teams. The Carolina Panthers and Las Vegas Raiders are among the upper echelon of the sport, and the New York Giants and Jets are absolute trash piles. Well, okay, maybe some things are going according to plan this season.

Each week, Dan and Todd will select two games against the spread. NFL Week 4 is all about rolling the dice and swinging for the fences. Go big or go home. Todd is all over two giant miss matches, while Dan dares to back the New York Giants.

I got snipped last week trying to separate a Super Bowl contender from a mere playoff contender. Maybe it was too early to make that distinction between Kansas City and the other Los Angeles squad. However, this week, I’m taking another swing.

The Rams are a Super Bowl contender. They should be able to defeat a measly playoff contender at home by at least a touchdown. Arizona has looked good in spurts; don’t get me wrong. But I still think there is a tier gap between these two NFC West teams. The Cardinals have a lot of weapons but haven’t been able to get it going all that much yet on the ground. Teams need to be able to attack LA in multiple ways. The Bucs couldn’t do it last week, and they eventually faded into a double-digit loss.

Speaking of Tampa Bay, it has a much easier path to traverse here in Week 4. Rather than facing the double-sided behemoth in LA, the New England Patriots are hosting. There are storylines galore here. Don’t get confused or thrown off the scent. The only one that matters is the record for rookie quarterbacks thus far this season. They are a combined 1-10, with the only win coming when Mac Jones and New England defeated fellow rookie QB Zach Wilson. The rookie passers have been absolutely terrible, including Jones.

That isn’t the worst thing for their future careers, but it is bad news for current chances of winning. The Patriots aren’t ready to compete with the likes of Tampa Bay from a talent and execution standpoint. Jones may develop into a wonderful passer, but it seemed weird when he was given the entire franchise from the jump for just this reason.

I know it’s risky, but the Giants have lost their last two games by a combined four points. New York can’t seem to get a combined effort from it’s offense and defense, because only one is playing well each game. That being said, they are playing teams close. New Orleans has been quite the opposite. They blew out Green Bay, then got blown out by Carolina. After an easy win versus the rebuilding Patriots, I do not expect the Saints to dominate.

New Orleans is the better football team right now, but the Giants have been playing up and down to their competition. I smell a close football game, meaning the 7.5 points that New York is getting is irresistible. The Giants are better than their record, while New Orleans feels like a mid-grade team that has overachieved to begin the season. Despite the red flags, I’m going with New York in NFL Week 4.

I’m back on the Browns bandwagon baby! They got me a win to start the season, but then I picked against them last week. I didn’t believe in Cleveland’s defense, but I truly underestimated the ineptitude of Chicago’s offense. No more. The Browns are a very good team with few weaknesses. What exactly are the Vikings?

Minnesota finally looked good last week, but I’m not about to forget the stinkers they had to start the year. I believe Cleveland is a level above the Vikings, but even if they are even, the Browns win by a field goal. That’s why I’m dropping a point and a half, because I believe in Cleveland. They are the best team in the AFC North and about to win another football game.