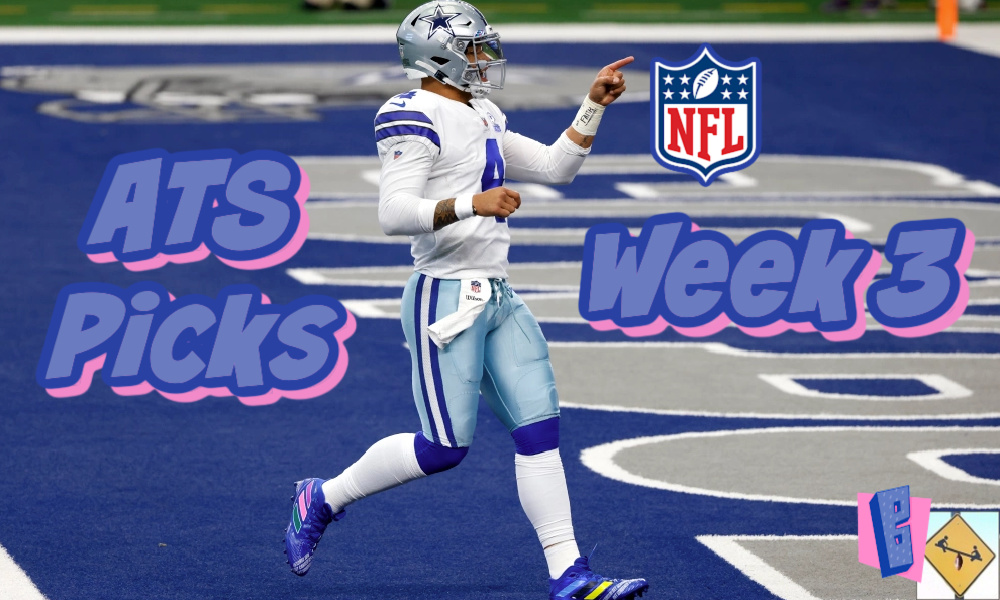 Last week was good to us and we’re 6-2 on the season, so we’re keeping our money behind proven winners. We’re giving away points in three of our four NFL Week 3 best picks ATS. All may be victorious this week as well.

It is obviously too soon to make any clear declarations on successful betting habits for the 2021 NFL season. We just want to toss around the idea of backing the terrible but somehow also underrated Houston Texans. They are one of just half a dozen 2-0 teams against the spread and have been given two weird lines in two weeks thus far. First, they were underdogs against the rebuilding and decimated Jaguars. Then, they were huge underdogs against a solid Cleveland team that probably isn’t going to beat anyone by 13 points. Two great bets with the Texans.

Houston is not the tanking team giving up on the season, yet it was being treated like it. The Texans created a roster of slightly washed-up veterans, meaning they were looking to compete. And that they have. Of course, all this is thrown out the window with the injury to Tyrod Taylor. The team is likely turning to non-Deshaun Watson quarterback, Davis Mills. It was a good two weeks while it lasted. Onto the next stupid trend!

Each week, Dan and Todd will select two games against the spread. NFL Week 3 is once again about proven winners and dropping points. We are thinking with our heads and not our hearts. Todd has his eyes on two playoff teams, while Dan is focused on some delicious lines. Let’s get to it!

There are actually quite a few lines I like in NFL Week 3. That doesn’t mean they will all hit, but more than the normal amount jumped out at me as being too low. Even the sports books have to have a feeling-out of the season before they know where to have lines settle.

One of the games that jumped out was this one. It’s the difference between being a title contender and being a playoff contender. Kansas City is the former; LA the latter. And that difference is worth more than the 3.5 (on top of a standard 3-point, home-field advantage) being given here. The KC offense has been as advertised these first two weeks. The team is averaging 34 points per game. Alas, because of defensive shortcomings, that has resulted in a 1-1 record, but can the Chargers really hang in the same manner that previous opponents have? I’m not sold. Against two NFC East opponents thus far, LA has looked…okay. If the East turns out to be the worst division in the league, as we expect, these are not resume-builders. Los Angeles has a lot of ground to make up in becoming a real title contender.

Speaking of real contenders, this is where Dallas must separate itself from the riffraff in the division. The Cowboys want to secure a division title and be a player in the playoffs. Easily vanquishing Philadelphia at home is a must. This is the Cowboys’ first home game of the season, which should allow the team to settle in a bit more than it has so far. It helps that the Eagles are losing big pieces to injury. Brandon Graham and Brandon Brooks, specifically, are out, greatly diminishing units that already had work to do to compete week in and week out. I’m expecting a Dallas statement win here against the supposed weakest team in the league’s weakest division.

The Browns defense has been underwhelming thus far, so I’m dubious of their abilities to blow out an above average football team in Chicago. The Bears have a good running game and decent defense. Now we get Justin Fields for a full game, which raises the ceiling considerably on offense. Perhaps the floor falls as well, but this is a big line.

Everyone would agree that Cleveland is currently better than Chicago, but over a touchdown better? No way. These are too many points to pass up. The Browns beat Houston by ten points and failed to cover. It will be a similar story against Chicago, failing to cover in a likely win. I’m behind the Bears with 7.5 points and a new look at quarterback.

I’m grabbing this line while it’s low, because Miami is in serious trouble. Not only are the Raiders very good on offense, but the Dolphins looked pitiful on defense last week against Buffalo. Now they are without their starting quarterback, so why does Vegas consider these two teams even? They are far from it.

The Raiders are quietly keeping pace with the rest of the AFC West, who all look very good by the way. I don’t see how Miami slows them down enough to keep this game close, let alone within a field goal. Give up the 3.5 points, or more if you miss this early line. Las Vegas wins this by at least a touchdown.