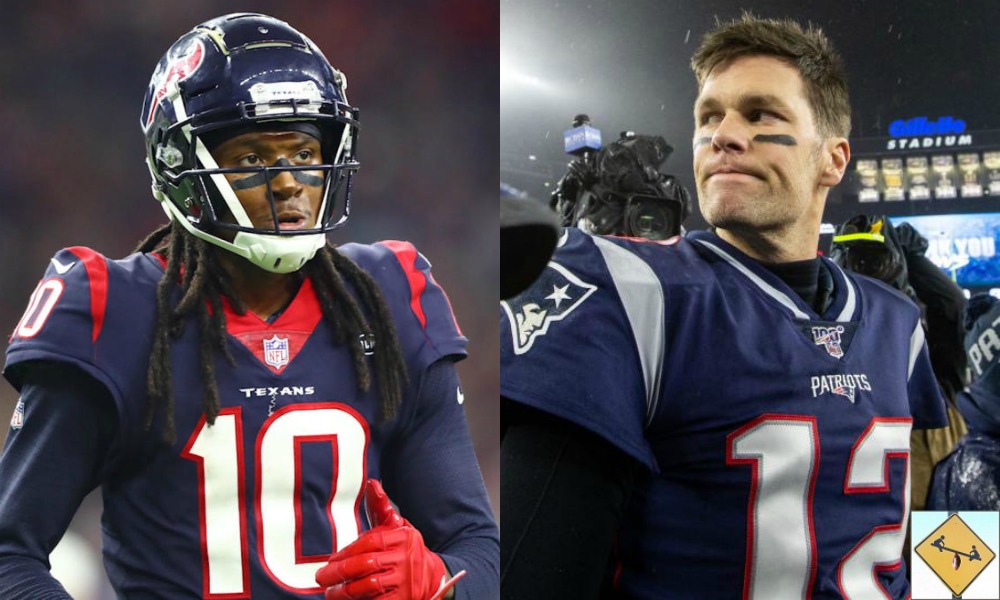 The sports world is upside down, but one constant has saved us all. NFL Free Agency featuring Tom Brady, with DeAndre Hopkins and our other favorite NFL heroes. Thank goodness.

The entirety of sports has been shut down. March Madness is gone for good this year. Perhaps the NBA and NHL seasons come back in time to declare a champion, or perhaps not. MLB is already starting late and may not get a full season played. Only the NFL is running its normal course since offseason league activity doesn’t require in-person gatherings. Thank goodness. Draft preparations and the NFL Draft itself will be altered this spring, but at least something has been saved.

On Monday, in the midst of sports quiet, we were graced with the start of NFL Free Agency and a trade that really made waves. The Houston Texans traded arguably the best wide receiver in football for a second-round pick. Are you kidding me!? There were other pieces involved, including Houston adding David Johnson, but cap folks will argue that taking on Johnson was actually a detriment to the Texans, not an asset. Just hours later, Minnesota turned Stefon Diggs, clearly an inferior receiver to DeAndre Hopkins, into four draft picks, including a first round pick. Now we’re talking!

Though the trade must have been soul-crushing for Texans fans, it was a piece of light shining through the sports darkness for the rest of us. The fact that trades THAT bad can still happen is refreshing. Not everyone is analytically superior to past generations of general managers. We still have Bill O’Brien!

Also on BuzzChomp: Dispatches from Elsewhere goes off the rails

Interestingly, the flurry of NFL Free Agency moves seemed to garner the proper amount of reaction from the sports world, but the acceptance of the new league CBA did not. Was it just me or did the CBA kind of get glossed over, even though there is literally no other sports going on? We are getting a new playoff format this very season, and the regular season will expand as soon as next year. This is huge stuff. Perhaps it simply got swallowed up by the vast amount of other news. But it’s odd that when we came back to loving sports news, no one harped on the fact that both the playoffs and regular season are changing, possibly for the worse. It’s wild!

I assume as the season draws closer, writers will circle back to the CBA changes that impact the coming games. I’m just glad we can giggle at Houston’s mess-ups in the meantime. I’m not saying it’s an apt cross-over punishment for the Houston Astros’ misdeeds, but the connection seems relevant. Then there’s Tom Brady and a complete power shift in the league. The fun never stops.

NFL Free Agency is always exciting and the NFL is always the biggest fish in the sports ocean, but now its truly the only fish swimming. Houston was the initial splash, call it a belly flop, followed by Tom Brady announcing his departure from New England. Both moves feel foolish for each player’s former team, but perhaps they aren’t. What if BOTH teams actually made the right decision?

Brady is definitely going to be overpaid for his services, and the Patriots have remained winners by refusing to ever overpay for players, especially those on the decline. New England lost last season because their offense could not do enough to help its great defense. Will they be able to upgrade from Brady? There’s a 50/50 chance in my opinion that whomever takes over will be as good or better. Remember, each time Brady was out with injury, his replacements played so well that another team tossed massive amounts of money at them.

Hopkins is a bit different. He’s at the top of his game and a second round pick seems like pennies on the dollar, especially when Diggs netted way more. But Houston will find its next receiver in this year’s draft, which is extremely deep at the position. The Texans lost last season for many reasons, so addressing them is more important than retaining a star player at a position that will never win you a football game. Wide receivers are crucial, but they can’t win games by themselves. I’m not sure the Texans deserve the benefit of the doubt, but if they are actually good at their jobs, then this was a deal made with the big picture in mind.

Now that I’ve successfully defended both moves by the Patriots and Texans respectively, let’s be honest. These two teams deserve tomatoes thrown at them for the boneheaded decisions that will likely derail playoff aspirations in 2020. The AFC is full of young talent, especially at the quarterback position. Sacrificing Pro Bowl players for monetary reasons rarely works out in the short term. Thank you NFL Free Agency for being interesting and exciting. Even the best teams make bad moves. With nothing else to follow, I’m hooked on these news and notes from the game we love best.