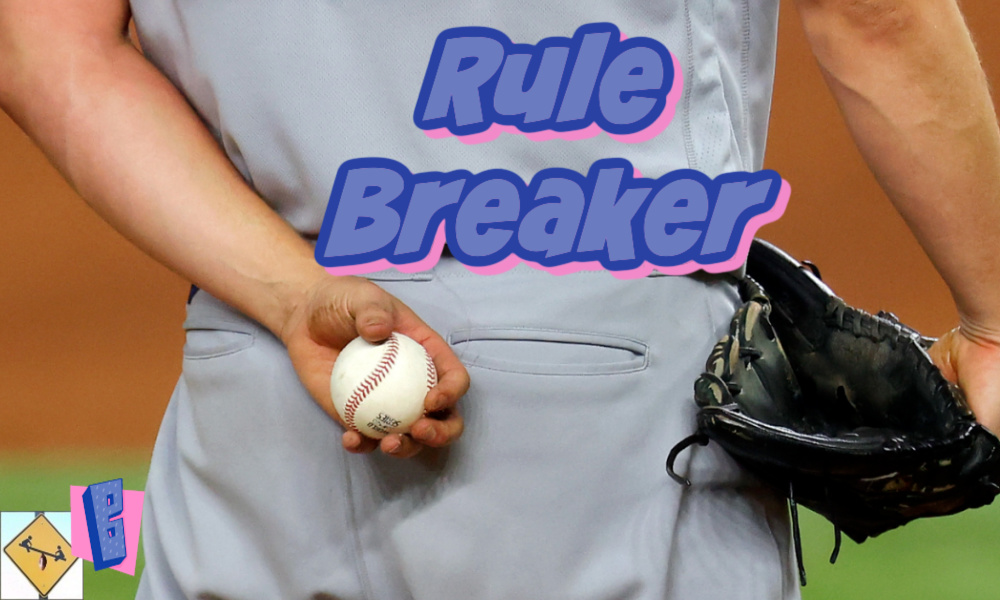 Everything MLB does seems to look kind of stupid once a little time passes. This is no different. MLB foreign substances were ALREADY illegal, but now punishment!

Major League Baseball has officially begun its crackdown on pitchers’ use of MLB foreign substances. Getting an extra grip had taken over the sport. This crackdown will, supposedly, cure the game of its current ills. Just like everything else MLB does, the execution may end up ruining something that would probably have been a net positive in the end.

There is no doubt that pitching has been dominating hitting in 2021. Contact was way down, strikeouts up yet again. Batting averages across the sport were the lowest they’d been since the dead-ball era. The league tried to change the ball before the season started to curb the home run rate. It didn’t really do that. Instead, the ball change suffocated one type of contact, but seemed to increase pitch movement.

Now I know what you’re thinking. Wasn’t that already illegal? Yes! But here, the unwritten rules were more important than the written ones. Teams never called out umpires to inspect other pitchers because they didn’t want it done to their own guys. Everyone just let it happen, let it build, let it take over the game.

We now got to this point, where spin rates are out of control, and no one can make contact. So MLB announces the crackdown: pitchers being checked after every game or before every appearance (in the case of relievers). Pitchers can be checked between innings. 10-game suspension for any malfeasance.

That all sounds good. This should be against the rules…it already was against the rules. But to implement spur of the moment like this is going to cause unintended consequences. Everything MLB does seems to look kind of stupid once a little time passes.

Also on BuzzChomp: How Bad are the New York Yankees?

Almost immediately after announcing that pitchers can no longer get this edge they have always relied on, Tyler Glasnow hurts his elbow and says it was 100 percent the result of not having feel on the ball. He had to change his grip to adjust, and it ended up messing up his elbow. He may end up needing Tommy John surgery.

He is not going to be the only pitcher to get hurt in the near future. He may not be the only one who blames this rule “change.” MLB is probably doing the right thing, but it just always comes off as wrong. Rob Manfred makes Roger Goodell look good by comparison.

From the nastiness over prorating salaries during the pandemic, to yanking the DH position in the NL back and forth, to expanding playoffs all of a sudden, to the ball change and lying about the earlier ball change, MLB bungles every chance it gets to make real change for the sport. This bodes horribly for the upcoming collective bargaining agreement after the ’21 season. Of course, maybe, again, the league will back its way into the correct outcome. Maybe it all comes down to Manfred believing in consequentialism.

I must begin with a quote from a highly respected mind in the world of sports writing, you. “Everything MLB does seems to look kind of stupid once a little time passes.” This one quote sums up baseball perfectly! You also cannot make a logical or just argument in favor of consequentialism. Subscribing to such a philosophy would mean that Hitler’s actions were just and right when he mass murdered millions of innocent people because those people ultimately gained more rights and freedoms after the fact than they had beforehand. It’s ludicrous!

The end does not justify the means and consequentialism is not a suitable argument for Manfred being successful. In spite of himself and his better judgement, the sport of baseball continues to thrive. The game continues to make changes that are unnecessary and enrage fans and players alike, such as punishing MLB foreign substances, yet it also is growing. While I believe that there is no such thing as bad publicity, case in point right here with baseball, there was an even better outcome waiting for MLB if even one smarter decision was made along the way.

Perhaps one of the smallest changes is what pisses me off the most. Why is there no DH in the National League? What exactly does the game gain by having different rules for each league? Imagine if the AFC in football required its quarterbacks to kick all field goals, but the NFC did not. It’s how it’s always been, so we better not make things better. Well, let’s try it out to see if it works, even though we already know it does because the other league is doing it… Then let’s change it back!

I’m likely in the minority, but all of this talk of rule changes and flip flopping rule changes and arbitrarily deciding to enforce existing rules in the MIDDLE of the FREAKING SEASON makes me not want to watch baseball. I wouldn’t care about them altering the baseballs each year if they simply told us what they were doing with some level of transparency. This is a lose lose situation because being able to compare last season to this season statistically is important. Fantasy sports are huge and we must be able to compare. So just stop tweaking things! Please stop. Unwritten rules are what make baseball fun and unique. They aren’t injuring players like in the NFL, so we get to keep them… until someone decides that things like MLB foreign substances are no longer acceptable because… I don’t know why.