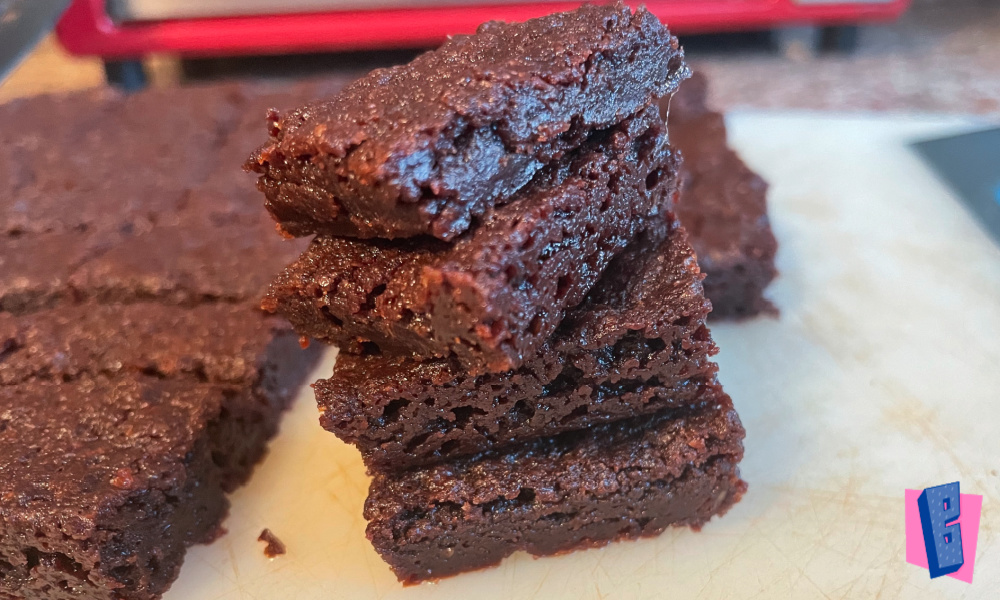 My gooey vegan fudge brownies will make you want to eat the whole tray! They are rich and sinfully delicious. Plus, if you’re making them for non-vegan friends, they will not know the difference.

It’s been years since I’ve made brownies. As I started to prepare this recipe, I was racking my brain as to when the last time I made them. Dan pointed out to me that it had been years and they were most likely pot brownies. This new vegan fudge brownie recipe will be made often, because wow. I originally found a vegan brownie recipe through My Darling Vegan and then made a few tweaks to create my final recipe.

Watch my Recipe Video
Jump to Ingredients
Jump to Preparation

I’ve been baking vegan for several few years now, basically once I started buying vegan butter and almond milk. I prefer it and now I always adapt a recipe to make it vegan, or search for a vegan recipe.

I was hosting a dinner with vegan friends and made these brownies for dessert. She mentioned to me that when she tries to make vegan brownies, they always come out more like cake and less like traditional brownies. The secret to these truly fudge brownies and getting that consistency is mirroring the “egg” just right.

Using eggs to bake creates a consistency that is hard to recreate when baking vegan. This recipe calls for “flax eggs” and honestly, I know a recipe will be good when I see that. What are “flax eggs?” They use ground flax seeds and water to substitute as an egg. The secret is to let the ground flax seeds and water solidify together. The consistency becomes similar to egg.

Another key component of this recipe is creating your fudge for the brownies. I’ve used recipes that just melt butter and them mix all the ingredients together. No, no, no. In this you melt the butter, sugars (brown and white), and cocoa powder together. You can use a double boiler or just melt it all together on the stove top, which is what I did. Just make sure you mix it up as its melting.

Other than creating your “flax eggs” and fudge, this recipe is extremely simple to make. Even if you’re not a baker, you can make this vegan recipe and impress everyone you know. They are fudgey, delicious, and will tempt you to eat way too many!

Photo Credit to Yours Truly