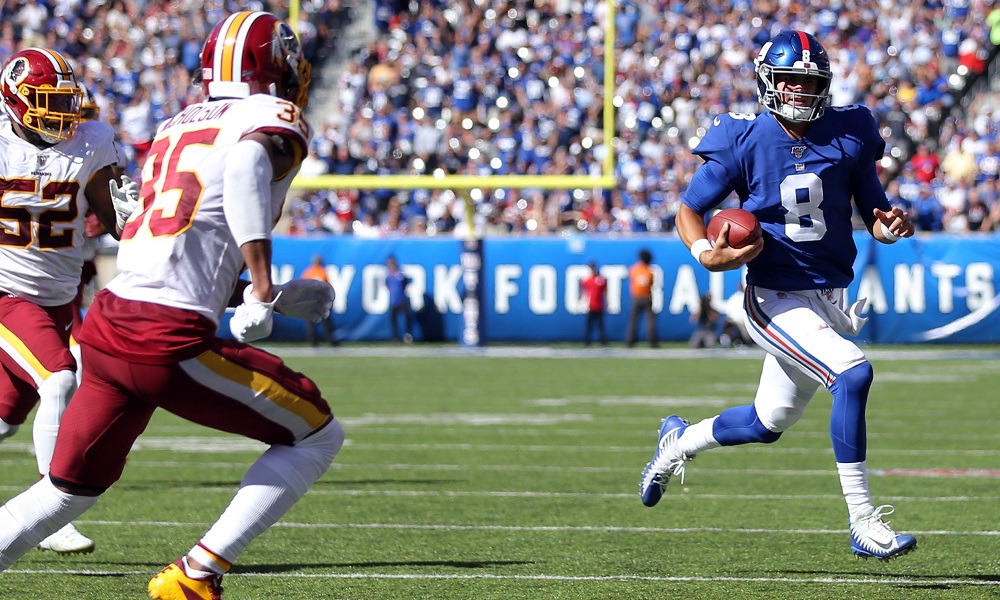 The first home start for Daniel Jones was about more the football. A fan base used to winning finally saw the light. He delivered.

Shortly after going over the George Washington bridge early Sunday morning, the outline of Metlife stadium came into view. My excitement quickly began to mount for the first home start of Daniel Jones’ career. He’s our quarterback of the future and I was about to witness history. Thankfully, Daniel Jones in person rocked my world. The New York Giants will never be the same.

Was he going to duplicate what we saw last week? Was Jones going to put up a dud? Or perhaps he would simply have a solid game, proving that last week was not a fluke. As my tailgating wound down, everyone in the parking lot was getting giddy. We were about to get our answer.

More BuzzChomp: 5 Simple Workouts to stay fit on the road

There was a buzz in the parking lot that I have not felt in many years. Gone were the moans and groans about how the New York Giants were going to lose to the 0-3 Redskins. Instead they were replaced with anticipation of witnessing the Daniel Jones second act. As the Giants ran out of the tunnel, Jones’ name was broadcast over the PA system to a thunderous applause. We were ready.

With Case Keenum under center on the first drive of the game, it took the Giants a mere three plays to assert themselves on defense. They quickly removed the stigma that they can be walked all over. On third down on their own 30 yard line, Keenum threw the first of four interceptions by Washington. The game was completely dominated by the Giants defense, something I have not been able to say since 2016. Yet Jones still shined.

Daniel Jones cashed in on the great field position by throwing a six yard pass to Wayne Gallman to put the Giants up 7-0. Even though it was early, it felt like this was going to be a good day for us Giants fans. Without the services of Saquon Barkley, Gallman stepped up (18 carries and 6 catches for 118 total yards and 2 TDs) and proved he is not an after thought. He can keep the ship afloat till Barkley comes back.

After forcing the Redskins into a punt on the next series, the Giants went on a 13 play, 94-yard drive that ate up seven minutes and ended with Gallman’s second touchdown. This put the Giants up 14-0 and essentially put the game out of reach for Washington. Talk about a great game to witness in person!

After last week, I was on cloud 9 about Jones and what he did leading an 18-point comeback. I felt like he could do no wrong, but of course he’s still a rookie. Midway through the 2nd quarter versus Washington Jones threw an interception on consecutive drives. There was a moment of pause, because the stadium was not sure what just happened. Was our excitement for Jones just a fluke? Were the “analysts” right after all? Of course not!

This was just the first of many hurdles for our rookie quarterback. Instead of getting himself down, Jones righted the ship and led the Giants to a 24-3 victory. He’s now undefeated and on a two game winning streak. This is the first time since 1997 that a Giants rookie QB won his first two starts. Jones ended the day completing 23 of 31 passes for 225 yards, a touchdown and two interceptions. It was nothing like last week’s gem, but simply watching him play was incredible.

There was one play in particular that stood out to me. It won’t show up in the stat sheet, but with 4:51 left in the 3rd quarter Jones stared down a 3rd and 13 on the Washington 41-yard line. The rookie looked like he was going to be sacked for a loss, but managed to escape down and rush down the middle of the field for 13 yards. Jones got the first down by diving head first through the defenders. A Jon Hilliman fumble at the two yard line killed the drive, but pinned Haskins deep enough for Jabrill Peppers’ 32-yard pick-six.

Make no mistake, the Giants defense absolutely came to play. The unit totaled three sacks, four interceptions, and only gave up three points. Some of New York’s success may have been the competition, but maybe it was the fact that they are starting to gel as a unit. September is the pre-season after all. Not only did the defense pick off Case Keenum on the first series of the game, they essentially ended his tenure as a starter. Dwayne Haskins was put into the game midway through the 2nd quarter, but didn’t fair any better with three interceptions of his own. Round 1 of Jones versus Haskins was a TKO by Danny Dimes.

After four games the Giants are 2-2 and have seemed to right the ship. Their next two games will be an immediate jump in level of opponent. They face the Vikings and Patriots, followed by a potential cupcake matchup with the Cardinals. Considering New York didn’t get its second win until mid-November in each of the last two seasons, I’m feeling pretty good right now. Most people predicted this season would be bad, so it feels good to shove it back in everyone’s face and put the doubters on mute. Imagine if the Giants find a way to steal a win from either Minnesota or New England.

Its been a long time since I left Metlife Stadium with a smile, but Daniel Jones has that power over me. Our beloved G-Men completed a dominate game. There are mistakes that need to be cleaned up and the turnovers need to be fixed, but we are no longer a team headed toward the top of the 2020 NFL Draft.