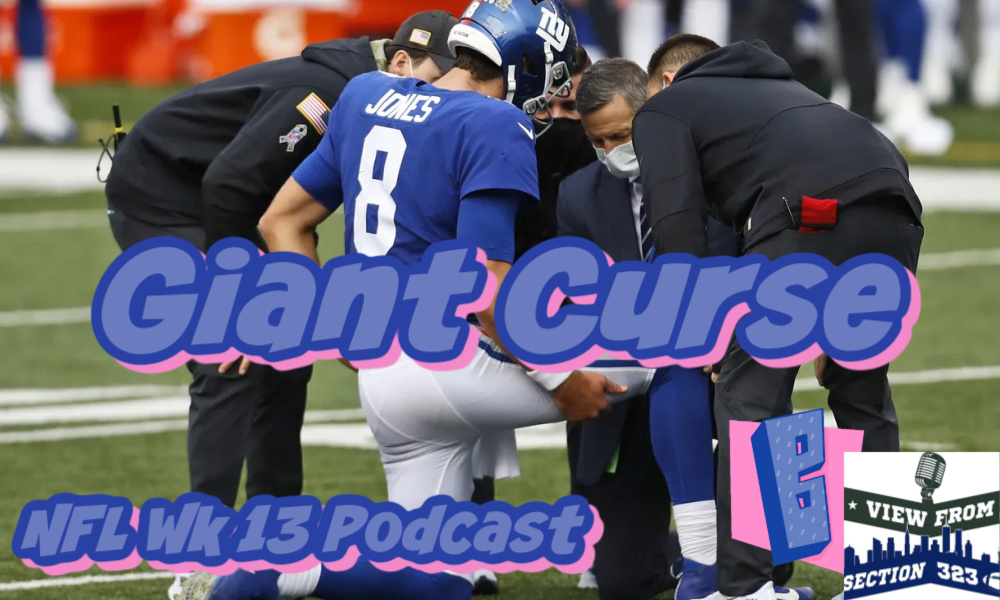 The New York Giants feel cursed, because good fortune was met with another gut punching injury. Phil and Bud are in Section 323 with your NFL Podcast perspective. Week 13 here we come.

Just when things start turning in the right direction for the New York Giants, boom, Danny Dimes’ hamstring has something to scream about. The Giants won the game against Cincinnati, but lost another huge piece of their formula for success. New York’s chances of winning the division are in jeopardy. Let’s all hope it’s a one week absence. The Jets, meanwhile, racked up another loss and have zero winnable games left. Phil and Bud host your NFL podcast, their View from Section 323. New York football from diehard fans.

More BuzzChomp: Your Best Picks Against the Spread (ATS) for NFL Week 13

NFL fans are typically vocal, but these two New Yorks tear off the roof. If an inter-city rivalry exists between the New York Giants and New York Jets, then Phil and Bud are it. They are in ‘Section 323’ with an NFL podcast covering the league with a New York focus. Will this season be completed on schedule? Can the Jets and Giants finally make a legitimate playoff run? Depends on who you ask. Phil and Bud are fired up, so don’t expect a compliment.

You can also admire the ‘View from Section 323’ via Podomatic or on iTunes. Then tune in for more of Phil and Bud in the 3 Man Booth live NFL roundtable, exclusively on BuzzChomp. Dan Salem joins the ‘Section 323’ team for a true fan’s perspective of everything NFL.

Do you believe the New York Giants or New York Jets will return to glory next season? What about avoiding another rebuild? Will a Super Bowl champion be crowned this season with fans in attendance? Phil is celebrating his Giants despite being kinda bad, while Bud refuses to ignore the massacre of his Jets. Its anything but civilized up in Section 323. Listen in.