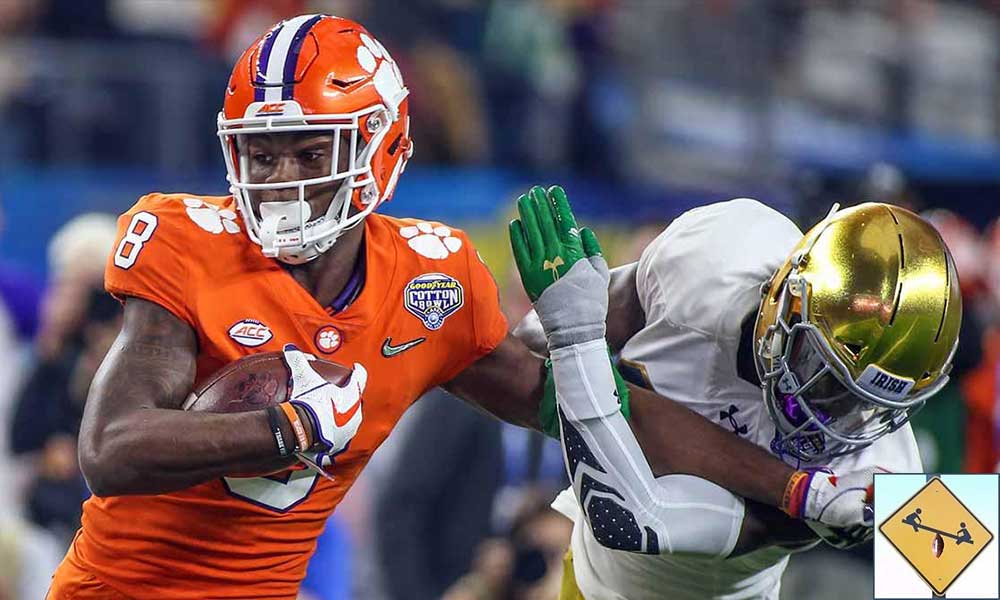 The initial college football rankings are out and traditional powers received a MAJOR leg up. By shunning schedule strength, many teams out of the top 25 need a lot of help to sniff a playoff spot.

Earlier this week, the preseason AP poll was released. It seems hard to believe, but apparently this is the first time ever the Clemson Tigers are the preseason No. 1 team in the country. We know preseason college football rankings can be occasionally worthless. We also know that No. 1 and 2 are the favorites to make the national championship. After the top two is where we can get into some discussion about favorites for the four-team playoff.

The AP has ranked Georgia and Oklahoma third and fourth respectively. I feel much better about Georgia heading in with the consistency of Jake (from State) Fromm behind center than Oklahoma turning to Alabama transfer Jalen Hurts at quarterback. Hurts had a few spectacular moments but flat-out lost his job to a younger teammate. That teammate is Tua Tagovailoa, so who would not have lost their job to him? But we don’t know how good Hurts will be. And the Sooners defense will do him no favors.

Of course, Oklahoma doesn’t have to play in the SEC. According to one scheduling metric, 10 SEC teams are among the 25 with the hardest schedules. Georgia, personally, is set to have the 13th-hardest schedule in the country. Oklahoma, meanwhile, shows up 46th. Determining strength of schedule before any games have been played is somewhat foolish logic, since it has to rely on similar rankings that we are criticizing for being misguided. From a grand standpoint, either the rankings are useful, making the strength of schedules valuable, or neither is. I think we can agree preseason rankings are useful; they just occasionally miss the mark.

In terms of missing the mark, I’d worry about the Florida Gators (ranked eighth). They overachieved last year thanks to a premiere defense. Feleipe Franks is a questionable quarterback (career completion percentage below 57%) playing behind a new offensive line. Perhaps the only break they caught with the schedule is avoiding Alabama, but they begin the season this week against Miami.

The other issue with rankings based on projections is teams outside the preseason top 15 don’t always have a reasonable chance. These teams start with a mythical bar they have to leap. They don’t simply have to keep pace with the teams ahead of them; they have to be better. In recent years, I feel like voters have gotten a little better about avoiding this issue. Some recalibrate their preseason feelings and adjust accordingly. Others, though, work off of the blueprint that is/was the preseason top 25.

One team outside the top 15 I like is Stanford (25th). In the Cardinal’s case, having a hard schedule will work to their benefit (if they can win!). Senior quarterback K.J. Costello had a breakout year last year and will need to anchor the offensive attack. A rebound will need to occur on defense, but I believe in head coach David Shaw’s pedigree for success. Stanford has ample opportunity to fly up the standings thanks to games against five ranked opponents and a sixth against USC. Arguably the three hardest (against Oregon, Washington, and Notre Dame) will all be at home.

We’ll know before October whether Stanford is for real or not this season. And that’s the curse of the preseason college football rankings. Stanford needs to capitalize on that hard schedule to get into the national discussion. Oklahoma just needs to trot through a weak schedule unscathed.

Because SEC teams have the strongest schedules at this juncture of the season, many traditional powers seem to have been given a leg up with preseason Top 25 rankings. Five of the top ten teams are from the SEC, making everyone in the SEC have a “hard” schedule on paper. This is bad news for a team like Florida, but will a SEC heavy schedule be as challenging as we all think? Will the first college football rankings of the season shift things dramatically?

Not to discount a team like Ohio State, but their number five ranking certainly sets them up for success on the back of an easier Big Ten slate. Their schedule ranks 17th in the nation, while Michigan has the 9th toughest schedule and starts two slots behind the Buckeyes. Both teams have little room for error, as both Clemson and Alabama have two of the four playoff spots locked up. With only two spots legitimately open, a team like Notre Dame is in prime position for securing a spot in the playoffs.

The Fighting Irish start the season ranked ninth and play the 57th hardest schedule. Even an early season loss to third ranked Georgia won’t eliminate the Irish, because its a game they are expected to lose based upon the rankings. Notre Dame must beat Michigan or Georgia and win their ‘easy’ games to secure a playoff spot. I expect them to enter their final game of the season versus Stanford with only one loss and a playoff spot on the line. Since you like the Cardinals, we both view this as a deciding game for the postseason. Stanford must pull its weight early on, but they are positioned to do just that.

I’m intrigued by Syracuse’s top 25 ranking, because their 68th ranked schedule gives them an opening into the playoff. Win and your in. They can’t afford to lose, but if they’re as good as their ranking would indicate, then everything has lined up nicely for them to win and get in. Top teams will lose, so that one which goes undefeated or ends with a single loss is going to make waves. Being in the top 25 of the initial college football rankings feels like a necessity for a playoff spot. Does that completely eliminate a team like USC already? The Trojans have the 3rd hardest schedule in the entire country. I suppose if they too win, they may get in.