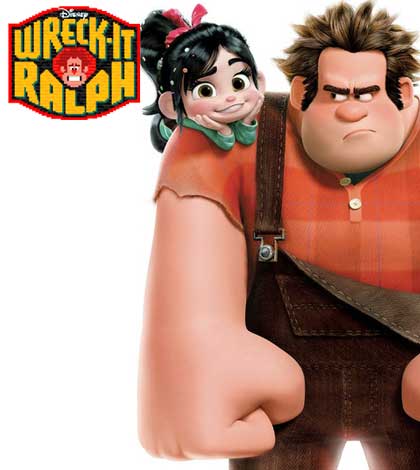 You should probably go see Wreck-It Ralph. Just go ahead and do yourself a favor and see you some Ralph. You’ve earned it.

When Pixar and Disney introduced Toy Story in 1995, little did they or any of us know that an animation revolution had begun that would mark the virtual extinction of all 2D films. In fact the only competition Pixar has received lately is that from CGI films made by other studios. And now parent company Disney is making some classics of its own.

Cue Wreck-It Ralph, the story of gaming’s nicest bad guy. Ralph is simply a layman’s Donkey Kong; he never gets the girl, the star, or in this case, the medal.  Attempting to prove himself to the characters within his own game, Ralph sets off for other gaming consoles to earn a medal from within those systems. Along the way, he meets new characters, battles new enemies, and inadvertently unleashes a swarm of mutant robot insects into one world. Can he save the day? Can he become a hero? (Hint: Yes).

Disney’s own animated features are truly picking up the pace. While Pixar may sit atop the mountain for visual effects, Disney originals and Dreamworks features have easily caught up in terms of story and character development. And while Pixar still easily can lay claim to the best CGI films of all time, few would argue that Wreck-It Ralph or How to Train Your Dragon were worse than Brave.

Ralph’s real strengths lie in its characters and their performances. The versatility of John C. Reilly continues to shine through. What haven’t you liked him in? Alan Tudyk turns in another stellar performance as King Candy. Sarah Silverman and Jack McBrayer both excel in their lovable roles while Jane Lynch again simply oozes comedy. The woman brings an inherent, un-teachable attitude to her characters, and they are a joy to watch.

Ralph’s only shortcoming is that it could have done more. By showcasing three deeply contrasting video games early on, the implication remained that Ralph would travel from genre to genre searching for his vindication. Yet upon arrival in “Sugar Rush,” Ralph stays put. The story builds and climaxes there, missing an attempt to hop from world to world, a la Kingdom Hearts.

Also seemingly few video game references or classic characters are showcased within Ralph’s 105 minutes. While the bartender from Tapper makes a cameo in addition to Sonic the Hedgehog and Q-bert, most gamers will be expecting a world flooded with classic characters from the 80’s up through today. Yet Mario, Donkey Kong and Solid Snake are nowhere to be found. (Though to be fair the latter could just be hiding in a box).

This is not Disney’s most hilarious feature. Toy Story 2 and The Emperor’s New Groove can fight over that.

Nor is this it’s most heartwarming. Cue Up and Wall-E.

But it sits right alongside Ratatouille as far as characters, story, and entertainment value. John Lassiter, director David Moore, and Disney have struck animated gold again, and it’s a joy to watch.

And yes, there’s already a sequel in the works.