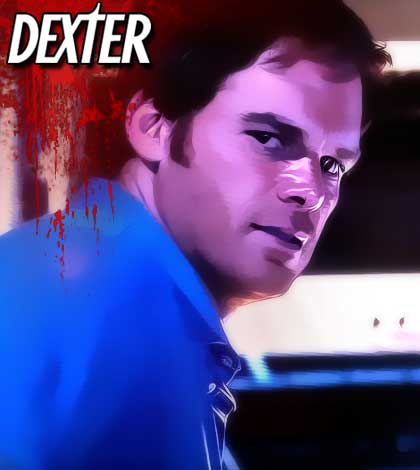 Wow! With only 3 more episodes to go, the plot not only thickens but some loose ends are tied up and killed off!

With hopes of creating new fun filled experiences, we open with Dexter trying to help Hannah with her seasickness problem by giving her a boat ride around the bay. Unfortunately Hannah’s tummy says no-no. Meanwhile, the always valiant Sirko discovers that his own people have sent not only one, but two assassins to kill him. For the first time ever we get to witness actual fear in Sirko. To remedy his predicament he asks Dexter to assassinate his assassins. Is there a better man for the job? Sirko promises that he and Dexter will be even-Steven if he succeeds. Of course our always suspicious Dexter declines the offer.

Sister Deb is still frazzled after professing her love to Dexter. Dex tries to ease her pain comparing the matter to loving M&M’s…sorry Dex but this won’t work with Deb. Poor Deb. She seems like a jealous girlfriend ready to strike like a cobra.

Feeling desperate, Sirko kidnaps Hannah forcing Dexter to take him up on his offer. In no time at all Dexter effortlessly kills the first assassin at a target range. Still on the hunt for the Bay Harbor Butcher, LaGuerta pays a visit to ex-Captain  Tom Matthews as he’s on her checklist for possible suspects. He gladly tells her to get lost and go to hell. The writers have attempted to sneak in a new character. A lame, nerdy arson investigator whom Dexter will obviously cross paths with later on.

With hopes of escaping, Hannah uses her poisoning skills to kill Sirko’s sidekick then Deb shows up, reluctantly saving her from death.  After a tip from Novikov, the second assassin nearly exterminates our boy Dexter. Sirko appears and pumps several bullets into the assassin’s chest. Just when we think Dexter and Sirko are settled up, Novikov suddenly pops up popping a cap into Sirko’s belly then escapes. Ouch!

Sadly, a compassionate Dexter escorts a dying Sirko to his watery grave. Sirko offers Dexter words of wisdom on the true meaning of love. Surely we can assume that Sirko will join his beloved Victor at the bottom of the bay. I will miss Sirko as he was a strong character with depth and couth. Influenced but Sirko, Dexter can now allow himself to be vulnerable, opening his heart to Hannah…or not.