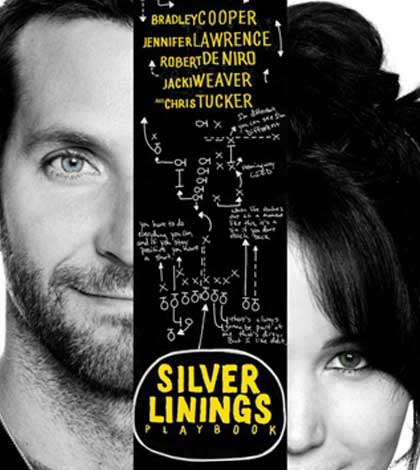 When I first saw the preview for the movie  I was very intrigued.  Bradley Cooper and Robert DeNiro together again.  You cannot go wrong when these two are paired up.  Bradley Cooper plays an ex-teacher who did a stint in a mental institution after witnessing an unfortunate extra marital event by his wife.  Speaking for myself, I have been through 3 marriages/divorces and a mental institution doesn’t sound too bad.  Cooper is released from the hospital and moves back home to take the guidance he received from the “puzzle factory”, to straighten his life out and try and get his wife back.  While trying to get back with his estranged wife he meets up with the very talented Jennifer Lawrence (The Hunger Games).  Cooper and Lawrence have great chemistry and seem very natural together.  Throw in Chris Tucker (Friday) as Cooper’s friend from the mental ward and you get a comedy, tragedy, drama, and romance all in one flick.  Cooper acts brilliantly and maybe since this is the time of year that the studios release their Oscar contenders, Cooper might just grab a statue.  One last thing, you might want to bring a date to this movie.  I brought my brother and I think we were the only non-couple in the audience.  Good thing I am secure in my manhood.

3 out of 4 Eyes.  Remember, see it with a member of the opposite sex.