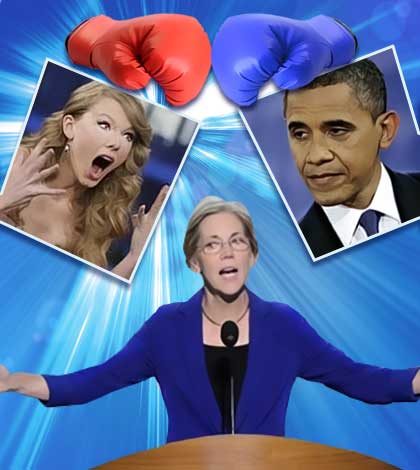 Well folks, here we are again, at the so-called “Fiscal Cliff”. All of America is waiting patiently for our elected officials in Washington to make some sort of a deal to save us all from the dream…(you know the one), the one where you are falling, falling, falling-only to wake up-just before you hit the ground! Only ‘this’ dream may not end so nice and tidy.

Hey!, here’s an idea… what if we went all Waco Texas on their a*ses and pumped about 28 hours of XM satellite radio through some massive speakers while the men and women in the House and the Senate try to get some work done?

I mean, we’d spin some cool tracks like… ”Ain’t no Mountain High Enough”, (that should rile them up a bit huh?!). Oh wait, what about Van Halen’s “Jump”! (…might as well jump! Go ‘head and jump!). Talk about a fiscal cliffhanger!

And maybe, as Grover Norquist and Mitch McConnell sit there snickering, wringing their hands thinking they got the Dem’s beat, we can blast “Money (That’s What I Want)”…The Flying Lizards version of course! That’ll just about send them all packing! They’ll agree to anything after about 6 hours of that!

A quick peek at history reveals the “Fiscal Cliff”, that so dominates the news these days, is just one more piece of junk the Bush administration left behind for us to deal with (nice going jerks!) Was that out-loud?

So, I bet you’re wondering where Taylor Swift fits-in to all this huh? Well, it recently occurred to me that her song, “We Are Never Ever Getting Back Together”, is the perfect song to beat the GOP and the Dem’s right into submission! I mean listen to it…the lyrics are perfect!

Seriously, this is Obama and John Boehner’s wedding song! No matter what happens in the next 35 days people, I believe the GOP and the Dem’s will never-ever-ever get back together on this, or any other challenge we throw at them! I hope I’m wrong! But, until then, it looks like we are all just “Free Fallin’” (Thank you Mr. Petty!).