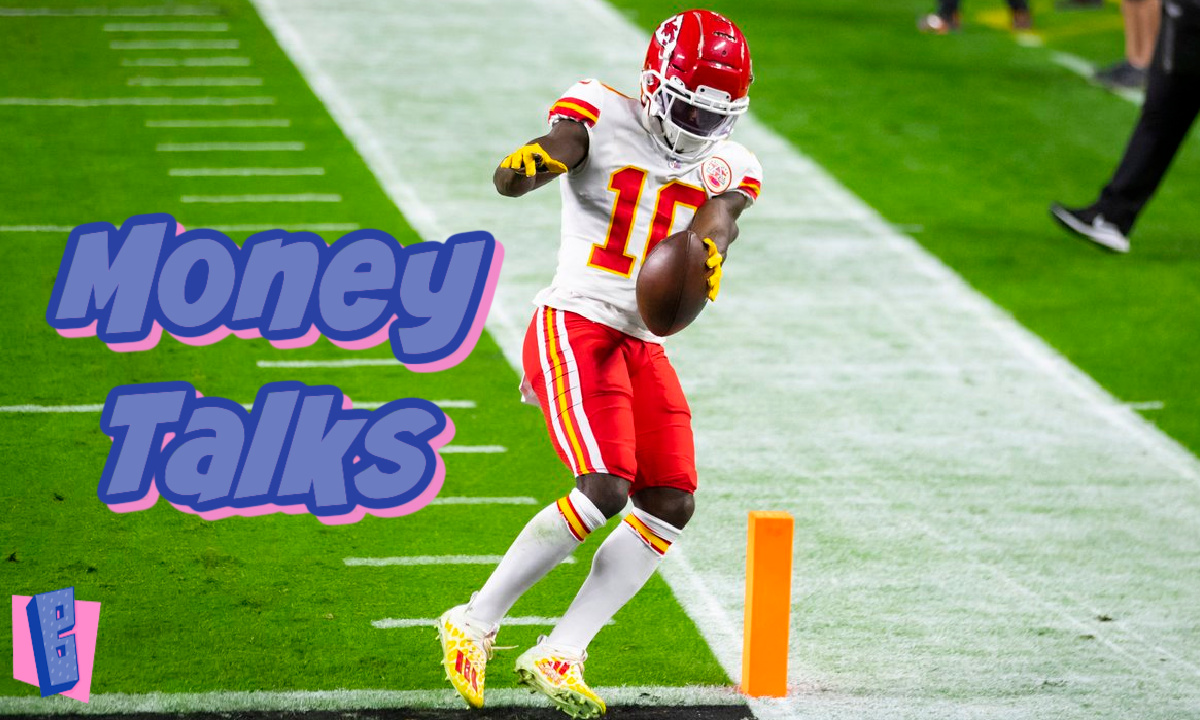 Why are NFL teams lobbing money at every top wide receiver? Tyreek Hill made his move because even mediocre players have insane market value. It all comes down to one reason and its not going away.

The NFL is relentless. It never stops. The nature of the league lends itself to crazy releases and star players on new teams each offseason because of how contracts work. Now, with a seeming increase in player empowerment, big names make demands and are flat-out being traded as well. Tyreek Hill is the latest wide receiver to make a splash, but this is no blip.

NFL teams will continue this trend for one main reason. Case in point, Tom Brady announced he was unretiring. It was a just-kidding to literally everyone and whomever bid on his “final” touchdown pass ball at auction last month. We all acknowledged and immediately moved on, because that type of spending is low hanging fruit. Quarterbacks and wide receivers continue to fly around the league. Under-the-radar signings are becoming just that: so under the radar that they don’t even register. NFL teams must spend their money, or suffer the consequences.

We know quarterback moves take center stage, and for good reason. But the wide receiver carousel is even hotter. For starters, the contracts being handed out are ludicrous, despite becoming the new normal. Davante Adams was the biggest name at the position. It took a large return in trade and an even larger contract to get him. But he wasn’t alone. Michael Gallup, D.J. Moore, Chris Godwin, and Mike Williams returned to their teams on huge deals. We will mention the signing of Christian Kirk again in a minute, but Jacksonville opened the bank for him. Even Russell Gage made out with $10 million per year. Now Tyreek Hill is headed to Miami in a trade. Woah.

More perplexing to the uninitiated is the fact that teams are jettisoning comparable or perhaps superior players because they don’t like their contract or future outlook. These teams are then going out and giving more money to another pass catcher. Shuffling pieces around doesn’t mean a team is getting better. The Cowboys couldn’t afford Amari Cooper, but they paid big to keep Gallup. The Rams spent big on Allen Robinson because they had decided they weren’t going to pay Robert Woods. The Jaguars, the biggest head-scratchers of the league, moved on from DJ Chark, only to vastly overpay Kirk. NFL teams must spend their money and last season proved you can’t win without an A+ quarterback/wide receiver combo.

In a league where any veteran can be dumped because the non-guaranteed money feels like slightly too much, why are teams suddenly paying replacement guys the same amount or more? It doesn’t make sense… at least to me.

Of course, we are also seeing more and more contracts with huge percentages of guaranteed money; yet another piece of player empowerment. NFL guys are finally getting deals that parallel other sports. It is mostly QBs at this juncture, but the guaranteed dollars could start to become the deciding factor in all contract negotiations for all positions. It should eventually become the only number that is even reported when someone does sign.

That means we could be seeing fewer of the surprise veteran cuts because those moves in the future won’t save as much money, if any. Franchises won’t be able to cut their losses and move to the next guy. So we should cherish these weird offseasons while we still have them. Tell me you disagree.

I disagree and expect the calamity and insane turnover to continue, if not increase. Why, you ask? Because the NFL thrives off this during its offseason. NFL news totally overshadowed March Madness and MLB’s return to play. There were only two or three quiet weeks before the NFL totally took over the sports media once again. Guaranteed money will ensure guys come to your team, but it won’t prevent all of the deals and trades from increasing. Quite the opposite.

The primary reasons teams are overpaying for comparable players, while letting go of their current players, are money and commitment. Davante Adams had enough of Green Bay and wanted to leave. He turned down the Packers’ offer. The same thing just happened with Tyreek Hill, who is being traded to Miami for the same reasons. Player empowerment works, especially if a team can add a similar guy who actually wants to play for them. But the bottom line is even simpler.

NFL teams have a salary cap and while it’s prudent to leave some money unspent, general managers get roasted for not utilizing all of their resources. Jobs are on the line when you leave money unspent and trades ignored. There is a widely accepted practice in business; you must spend your entire budget, because if you don’t, then you won’t receive it next time. With NFL teams, if you don’t spend your budget or get a return for an unhappy player, you get fired and won’t receive it next time. The opportunity is gone.

We also roast general managers for overspending and maxing out the salary cap, but we always caveat with “at least they tried.” I love New York Jets general manager Joe Douglas because he keeps trading away unhappy players or players teetering towards under performance for top returns. He didn’t overspend last year during a rebuild, but has used nearly all of his cap to spend this offseason without throwing one huge contract at one player. That said, he can still afford to do so and went hard after wide receiver Tyreek Hill. We witnessed how the final four teams in the playoffs last year had monster QB/WR combos. Every team must replicate that or someone’s getting fired.