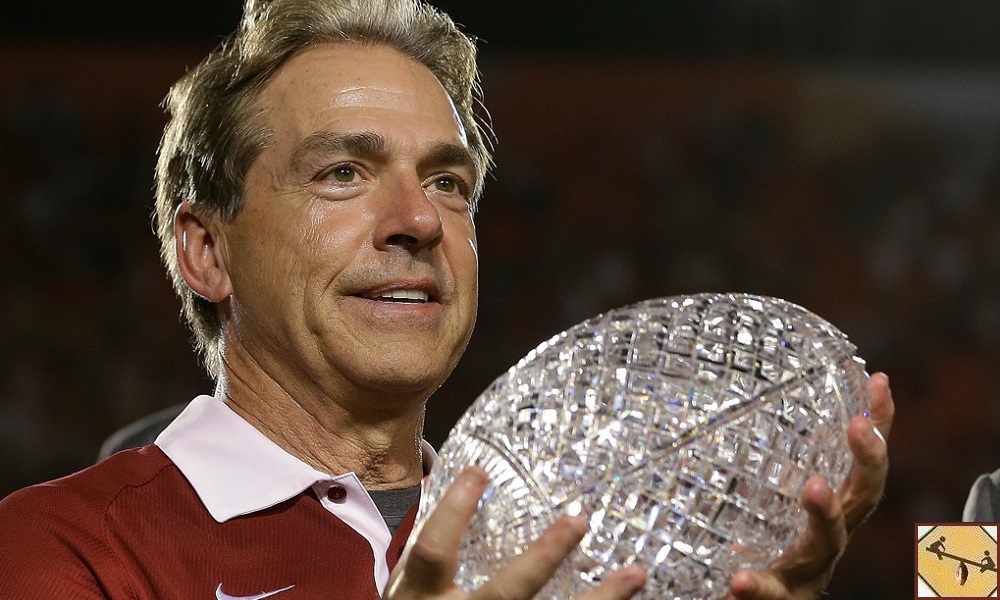 Nick Saban is an exceptional coach, but does his poor NFL resume ultimately tarnish his legacy? The greatest college football coach in history must face the ultimate question.

Tonight, Nick Saban will be leading his Alabama Crimson Tide against the Clemson Tigers as he attempts to win his sixth national championship. If he brings home the win, it would be his fifth national title in just 10 years at Alabama. Playing for the title happens more often than it doesn’t with Saban at the helm.

He has seven conference championships despite playing in the best conference in football for the past 16 years, since he began at LSU in 2000. Going further back, he had a nearly 60% winning percentage at Michigan State in the 90’s and went 9-2 in his lone season as Toledo head coach. The fact is, Saban has proven everything he possibly could at the collegiate level and is arguably the greatest coach the sport has ever seen.

But he never succeeded in the NFL and then quit before he really gave things a chance. Saban was an NFL head coach for just two seasons, going 15-17 in Miami. Do you hold this against him? Is it possible to be a great football coach when someone hasn’t had success at the highest level of the sport? There is a built-in caveat, like someone being a great soccer coach, but it comes in the MLS and not in Europe.

College football is much different from the NFL, which possibly speaks in Saban’s favor. Recruiting is a large percentage of the job in college. A great in-game coach who cannot recruit will not succeed, no matter what. In the pros, there is no recruiting with the exception of speaking to free agents who may be going somewhere for less money. Let’s just say a need for recruitment is rare.

Saban is a great recruiter. Is he a great coach? It is harder to judge when his players are always significantly better than the competition. That doesn’t happen at the next level. When it didn’t happen, Saban decided to move on. That means…something. Maybe there should be no carryover between the two because they are so different. Or maybe college football is the stepping stone for the NFL, and Saban can’t cut it. He’s just a Triple-A All-Star.

Nick Saban is easily the best coach in the history of college football. His resume is off the charts, regardless of the outcome of the 2017 National Championship game. His NFL resume is much the opposite, but I’m not sure two seasons is a large enough sample size. Consider that Saban had zero impact on Miami’s roster during those two years as head coach. Nearly every player was a leftover from the previous regime. All football fans know that coaches find success when they get their guys in their system. Did that ever happen for Saban in Miami?

Jim Harbaugh had initial success in the NFL, yet he had a roster that fit his style right out of the gate. Once that roster began to mold into something quite different, the team struggled and Harbaugh left. He saw the writing on the wall, as did Nick Saban. Their respective NFL teams were not forming a roster to compliment each coach’s style. Sometimes as a coach you get a General Manager and owner who will give you everything you need to win, and other times you’re stuck with a GM and owner who have their own agendas to execute.

I do not believe that two lackluster NFL seasons is a knock against Nick Saban. It’s hard to turn an NFL team around that quickly, especially when its a franchise like Miami known for screwing things up in the front office and playing mediocre football. Some coaches get lucky early on, but most need five years to build their team with their guys. Yet most coaches are not given the opportunity. Saban left for greener pastures before being fired. Now that would have been a real black mark on his resume.


I’d love to see Nick Saban give it a go in the NFL once again, but he has nothing to gain from such a venture. The money is not as good. His players won’t be as good, as compared to the competition. Plus he’s achieved a level of success in college football never before seen. Saban’s best play is to continue building on his resume until its so thick with gold that no coach can ever touch it. I’m sure he holds a small desire to win the Super Bowl, but his legacy will always be elsewhere.