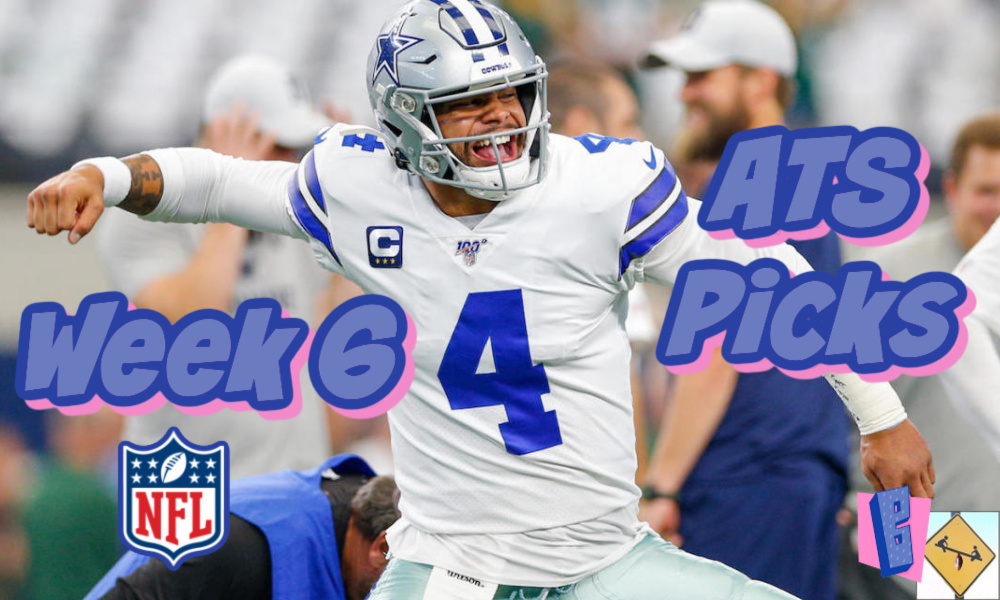 Injuries are mounting and the byes have begun. Good thing a few teams are dominating with cupcake matchups in NFL Week 6. Your best picks against the spread.

Injuries, injuries, injuries are mounting. We are only five weeks into what is going to be the longest regular season in NFL history, and important players are dropping like flies. This could be due to any number of factors: a weird previous season and offseason that threw off everyone’s preparation, a cutdown preseason that perhaps had players more out of shape, or even just random chance.

NFL Week 5 felt heavy though. Russell Wilson started things off by being removed from Thursday’s game. Calvin Ridley didn’t travel with his squad for the Sunday morning game (though that may not be injury-related). And then on Sunday, the injuries multiplied, from Kansas City to Cincinnati, to Pittsburgh to New York. Heck, the Giants don’t even have enough guys left to field an offense next week if they don’t get some good news during the week. Injuries always play a factor in picking games, especially when quarterbacks go down. We will keep our eyes ever on the injury designations as best we can early in NFL Week 6.

With so many injuries, where do we stand in NFL Week 6? Some teams keep dominating and have cupcake matchups this week. Each week, Dan and Todd will select two games against the spread. NFL Week 6 is once again about winners who don’t care about giving up points. Toss them aside. Todd is all over two division leaders, while Dan is about two teams playing way better than advertised.

What am I missing here? The line opened at -1 and immediately shot up another few points. I expect it to go even higher as the week progresses. Dallas is looking like one of the best teams in the NFC, particularly on offense, as everyone expected. The Cowboys are 5-0 ATS, which includes two tough covers already on the road. This will be Dallas’ easiest road game thus far.

Other than hanging with Tampa Bay and losing, we have yet to see New England look all that good, in the midst of what appears to be a very easy opening schedule. Hosting the Cowboys will be anything but easy. I don’t see the Patriots hanging in this one at all.

It is too early to determine who is likely to make up the AFC playoff field. But I don’t think it too early to deem Los Angeles one of the top contenders. They have taken a leap from where they were in Justin Herbert’s first season. A head-to-head win over Kansas City doesn’t guarantee a division title, but it doesn’t NOT guarantee one either! The Chargers simply have one of the best resumes in the first quarter of the season of anyone in the league.

Baltimore, meanwhile, has had its struggles. Through a pretty easy opening slate, the Ravens haven’t found consistency. A high-powered win over KC was followed by a rumble against Detroit of all teams. And a tough Monday night game against Indy leaves them with more questions about what the offense can be counted on to produce. Defeating LA by more than a field goal sounds like too tall an order right now.

I am very impressed by the Bills. They easily covered last weekend against Kansas City, yet are still only giving up five and half this week versus a subpar Titans team. I witnessed Tennessee get pushed around by the New York Jets. They were minus a few players, but still showed their true colors. The Titans simply can not hang with Buffalo.

I’m backing the Bills until proven wrong, because they are scoring at will no matter who they play. Give up the points and make Tennessee show something, anything, on the field. They are not a playoff team. Buffalo is a Super Bowl hopeful. No comparison.

Call me crazy, but the Colts and Texans are kind of the same team right now. Both have nearly won a few games, while losing ugly at least once. Neither is impressive, but they aren’t pushovers either. Now that Indianapolis almost beat the Ravens, they are vastly superior? Umm, no, not at all.

Houston is not a good football team, but they are far from bad right now. The same is true of the Colts, who blew a big lead and lost last weekend. I’d stay far away from this game if the line was smaller, but apparently Indianapolis proved something last week. Now in NFL Week 6 they are big favorites. This is dumb, because the Ravens are not a great team either. The Texans are getting nearly ten points, so take them. This will be another close game.