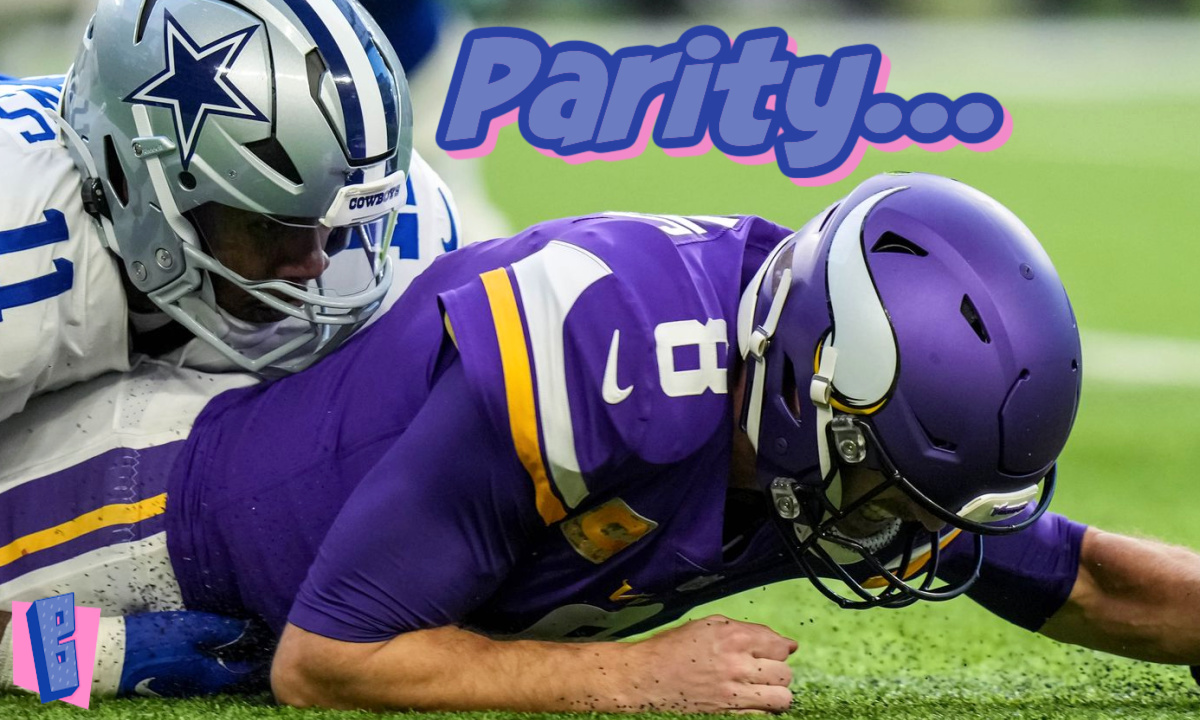 Every game each week is up for grabs, but is the title truly anyone’s to hold? NFL parity may have chopped the league into pieces, but the true contenders still stand alone.

We’re not sure if the numbers bear this out, but it feels like 2022 is the most densely packed NFL season we’ve had in some time. NFL parity at it’s finest! First off, there are no dominant teams. Secondly, few, if any, teams are pushovers. Essentially, every team in the league is either good or okay, and it’s hard to tell which is which some weeks.

The Philadelphia Eagles, who everyone thought would cruise to the Super Bowl just a couple weeks ago, have been contained and contested for two consecutive weeks now by less-than-stellar opponents. A loss to Washington was followed up by a near loss to the Jeff Saturday-led Indianapolis Colts. Philly may still end up representing the NFC in the big game, but it doesn’t feel like a forgone conclusion any longer.

In the AFC, Buffalo was supposed to be that shoe-in representative. No more. The Bills have struggled for three straight weeks, taking losses in two of them, and have dropped back into a jumble in the standings. Despite having a point differential a level of magnitude ahead of every other team in the sport, the Bills have work to do just to make the playoffs.

On the other side of the coin, bottom-feeders like Denver and Chicago pose some of the most fearsome units in the league. Denver defensively and Chicago offensively. Heck, the Los Angeles Rams are tied with the fewest wins in the conference, but it would be hard to confidently say the defending champions are a pushover. Are we witnessing the end of elite title contenders? Has NFL parity conquered all?

NFL Over Reaction to Week 11

Todd Salem: Everyone Is A Contender

I suppose if you want to quibble about Houston being a legit bad team, I can grant it. However, there wasn’t much that separated the Texans from the likes of Tennessee or the Giants in recent losses. It’s how they have settled into a 4-5-1 record against the spread. They are in many of these ballgames.

Speaking of records ATS, not a single team in the league has fewer than two losses or fewer than two wins through 10 or 11 games. Now, that is certainly the objective of lines-makers. But they hardly, if ever, accomplish such a bunching.

We always say that the NFL is a league where any team can win or lose in any given week. Parity is king. After 11 weeks, though, most folks think they have a clear idea of a hierarchy of contenders. Not this year. There are at least 13 teams in the NFC and 10 teams in the AFC still in the playoff conversation. I could be talked into as many as 11 teams league-wide being actual championship contenders. We could quibble on the particulars. The bottom line is nearly everyone in the league thinks they can compete week in and week out, and most know they are still alive for postseason play. I don’t think an expanded playoff field has anything to do with that, though. Obviously, more teams will end up getting in. It’s just the nature of the beast in ’22.

In some respects, this is great for the sport. More fan bases are engaged; more teams are ready to compete. Conversely, having an elite tier of contenders makes the season feel more important. When watching greatness, the games have more weight. The future has more weight as well, wondering if the upper echelon will succeed or someone will fight and knock them off. This year, we’re all kind of just hanging around each weekend to see what the standings will look like by Tuesday.

Dan Salem: A Clear Top Three In The NFL

NFL parity has been growing and growing over the last five to ten years, but usually we see significant separation by Thanksgiving. Not this season. Part of me is excited, while the other part who enjoys picking winners each week is frustrated as hell. To say this has spilled over into fantasy football is an understatement, as league wide “balance” is making weekly player performances just as unpredictable. In terms of which teams are truly the best this season, there is still no debate, regardless of weekly struggles.

We talked last week about defense defining who makes the NFL playoffs. This remains true, but there is one significant difference when it comes to our title contenders. NFL parity only applies to the standings and weekly play on the field, not who “has the complete package” so to speak. Only three teams are currently balanced on both sides of the ball, despite what the last three weeks may have shown us. Two AFC teams and one NFC team have excellent offenses to accompany their good defense, or vice versa. Buffalo, Kansas City and Philadelphia are without question the top three and our only true title contenders after a wild NFL Week 11.

To your point, none of the three teams I mentioned are untouchable. All three have serious vulnerabilities and there is enough great defense among our other league contenders to take any or all three of them down. The Jets and Patriots both have excellent defenses, but their offenses are scaring no one right now. Tennessee is balanced, but not dominant enough to scare a fly. Same goes for Baltimore and Minnesota and Dallas. The Giants keep getting injured, so they are questionable in my opinion, as are the leaders of the NFC South and West divisions. Only the Bills, Eagles and Chiefs have shown dominance, overcome adversity, and hold weaknesses that can easily be covered or eliminated by season’s end.

Will this season end up as chalk in the Super Bowl, or will NFL parity prevail? I’m siding with parity, because the playoffs will likely be as unpredictable as the season has been on a weekly basis. That said, there’s no smart money to be wagered on anyone outside of our top three teams. Roll the dice and hope lady luck is on your side, or see through the weekly fog and notice only the obvious contenders are great enough to win a championship. The funny thing is, I’ll probably be singing a different tune in another three weeks. That’s the 2022 NFL season for you.