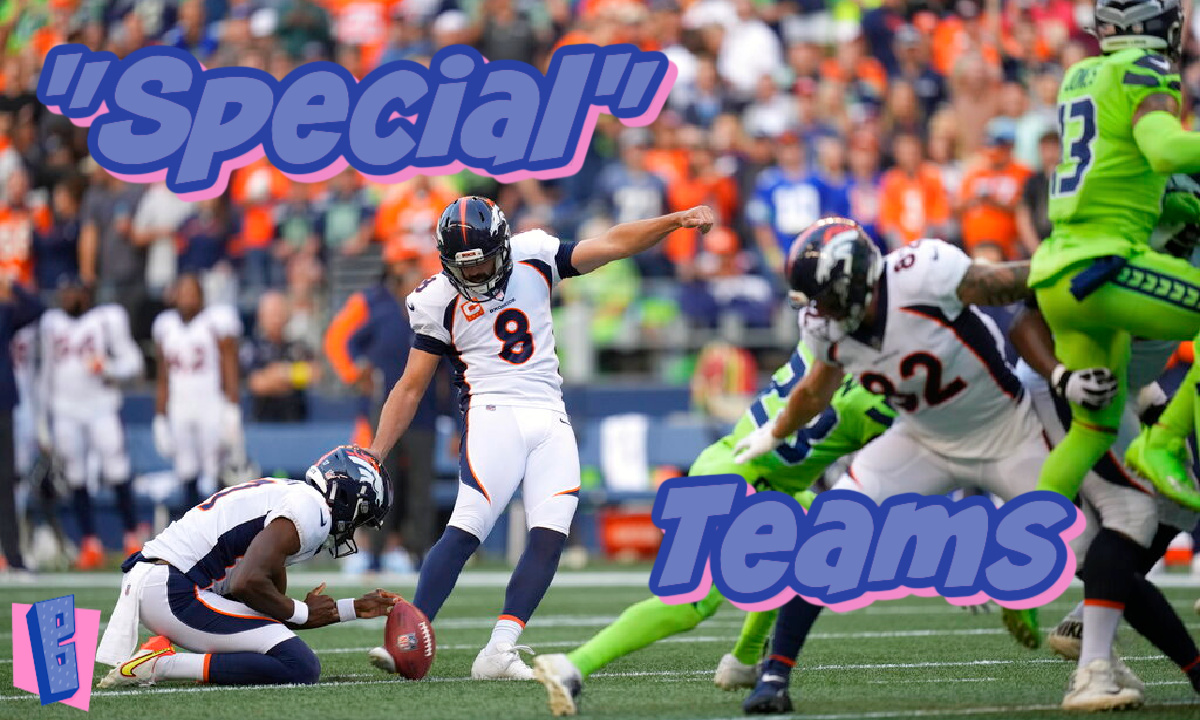 Up is down and Special Teams is all anyone can talk about after an unforgettable NFL week 1. The new landscape of the league is truly special… teams in our NFL over reaction.

The NFL season got started with a bang, as Week 1 was full of fireworks that both exploded in the air and right in the faces of those trying to fire them. Josh Allen and the Buffalo Bills housed the defending Super Bowl champs on Thursday night. After that, superstars dominated the weekend. Wait, check that. Our notes say that… special teams dominated the weekend? That can’t be right.

Special teams are not supposed to be THIS special. Our NFL over reaction asks a rather serious question. Is this the new look of the league, where parity is so high that special teams decides nearly every outcome? Where one great player like Barkley or Jackson makes all the difference, assuming special teams go your way? Let’s hope not as we over react.

NFL Over Reaction to Week 1

The New York Giants went to 1-0 in the Brian Daboll era after the new head coach went for, and connected on, a gutsy two-point conversion. After that, Tennessee missed a field goal as time expired to secure the victory for New York. According to the box, there were also over 600 yards in punts in this game! Special teams! In Atlanta, New Orleans completed a fourth-quarter comeback by connecting on its game-winning field goal attempt, while Younghoe Koo scored 14 points in a losing effort for the Falcons.

We don’t even have enough time to recap all of the special teams nonsense that took place in Cincinnati. There were bungled snaps, missed field goals, a missed extra point, a near tie. My only response is, on a 53-man roster, how is there only one man capable of long-snapping? If the long snapper gets hurt, why does that submarine a superior club? No one else practices that, just in case?

Cade York hit a 58-yard game-winner for the Browns. Harrison Butker hit a 54-yarder for the Chiefs with no plant leg, after getting hurt to start the game. Safety Justin Reid blasted every kickoff into the endzone because the Chiefs, in fact, do have non-special teamers practice such skills, apparently. Cincy should take note. It all made for a wild Sunday that had nothing to do with any of the skill players or defenders. Was this a coincidence, or do you feel as though teams are more balanced this year, leading to special teams being a deciding factor?

It certainly felt like there were more good “bad” teams heading into the year, or at least a dearth of truly terrible teams. And at the top end, a dozen squads could claim supremacy. Maybe I’m reading too much into it, but greater league parity would seem to lead to such outcomes, where smaller parts of a roster make bigger differences.

That’s not to say that half of the games every week will be decided by big, special teams plays, but I will be interested to see the special teams rankings of the better teams once we get a few more weeks under our belts.

Special teams is critically important to success in football, especially when teams are equally unprepared for the game. What we witnessed in NFL Week 1 is a continuation of a trend of bad September football. The first month, and week 1 in particular, is simply an extension of the preseason. This was the FIRST time each team’s starters played a full game together.

It’s no wonder things were sloppy and outcomes incredibly unpredictable. Enter special teams, the make or break factor that likely was practiced in a close-to-game-like scenario the most. Half of our future playoff teams lost and played horrible football. I’m looking at you Packers. A few teams exploited their opponents, but mostly this was an even wash of spurts of decent football. A NFL over reaction is fun, but slow your roll.

Even the Jets and Ravens game was super close. If New York makes all its kicks, the final score is 24-13 and furthermore, the Jets won every statistical category except touchdowns. Baltimore is really good and perhaps the Jets are good too. But it’s week 1 so who knows! The point is, a great player like Lamar Jackson and the Jets’ missed kicks were the difference in that game.

Look around the league and it’s the same trend. Barkley was the difference for the Giants. Bad special teams sunk Cincinnati, plus Burrow’s interceptions. I give very little value to the outcomes of these games. Even the eye test is suspect. I mean, no way Green Bay is that bad and Minnesota that good. My Jets looked pretty good, assuming Baltimore is excellent, but I’m waiting until October to make any bold statements on their viability as a winning team. Heck, the tanking Seahawks and Geno Smith handed it to Denver. Geno Smith!!