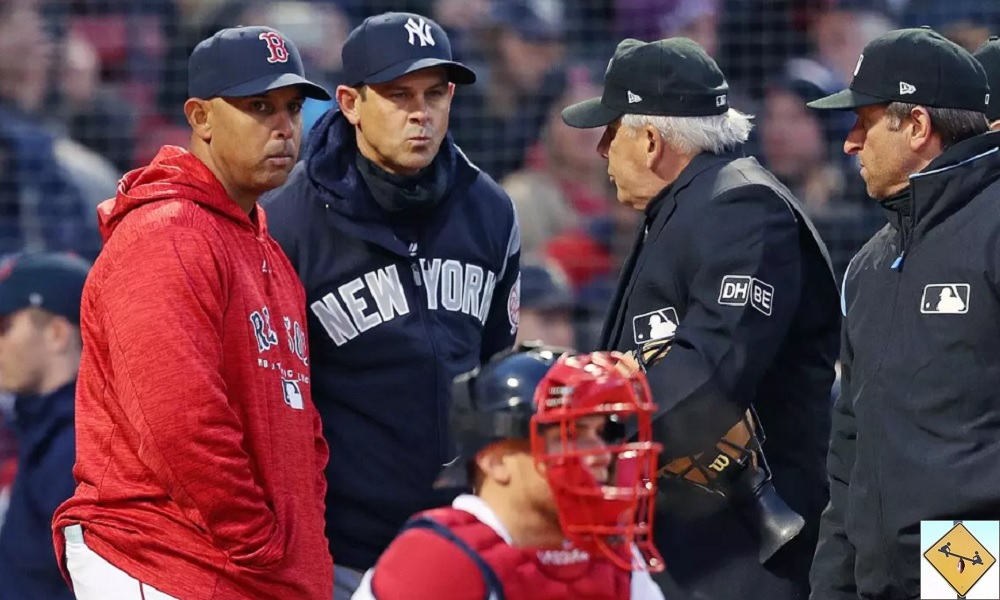 The New York Yankees are rolling since the Boston Massacre one week ago, yet they remain just as far out of first place in the AL East. Bend but never break! New York MUST aim to win the AL East, because today’s fire will light up the postseason.

The New York Yankees just completed series wins over the White Sox and Rangers, two bottom feeders that allowed New York to compile six wins over their last seven games. Going 6-1 since the Boston Massacre of a week ago is great, but literally nothing has changed in the standings. What Todd Salem wrote a week ago, seen below, all holds true. So what is a Yankees fan to do?

The Boston Red Sox also went 6-1 over their last week of games, leaving the Yankees 9.5 games out of first place in the AL East as of Monday August 13th. Much is being written about New York conceding the division, and with Aaron Judge’s injury stretching out longer and longer, it’s a reasonable question to consider. But it’s also garbage! The Yankees are 7-6 with Judge sidelined, so he has certainly been missed. But as Todd notes below in his followup to the Red Sox Massacre which took place just over a week ago, its New York’s pitching that needs to turn a major corner.

Winning the AL East is still the goal, but so is winning a likely wildcard game. Boston is not slowing down. Seattle and Oakland are not either. New York must roll straight on through the final six+ weeks of the season and into the playoffs with a fire under its ass. If the Yankees fail to light this fire, and it has to be bigger than the one that carried them to victories over Chicago and Texas, then they will not go as far as last season. They will not get within one victory of the 2018 World Series. But we are optimists! The New York Yankees are a great baseball team with a great bullpen and great starting pitching.

Set their staff’s slump aside, because almost everyone goes through it at some point during the year. Boston is literally the exception, on pace to win the most games in MLB history. But we all know that everything about the regular season is erased in the postseason. Both the Red Sox and Houston will need to hit and pitch better to beat New York. The Yankees will need to be great to beat them, or Oakland/Seattle if necessary. The sky is still falling even a week removed, but let it fall. Todd summarized the catastrophe perfectly. The New York Yankees have first world baseball problems and they all go away once the playoffs begin.

This past weekend couldn’t have gone much worse for the New York Yankees. Coming off the high of the MLB trade deadline during which the team added a few important pieces, a four-game set against the league-leading Boston Red Sox was supposed to be a focal point of the second half.

Well, it was. Unfortunately, the outcome was obvious and crushing. The Yankees are not on Boston’s level. They were swept in the four-game series, including blowing a three-run ninth-inning lead in Sunday night’s game. The division lead for the Red Sox is now 9.5 games, the largest divisional lead in all of baseball.

After whining for weeks about the potential wildcard play-in game between a hypothetical 100-win Yankees club and a ho-hum Seattle or Oakland, New York now has its work cut out for it to simply make the playoffs at all. The AL East is out of reach, and suddenly there is a fight between those three teams for just two spots.

It would have been highly annoying to see the Yankees forced to partake in a one-game playoff if they finished something like 10 games ahead of all non-Boston and non-Houston teams. Forced to use their best starter in that game and either be eliminated entirely or hamstring themselves for the divisional round of the postseason was not a happy scenario for which to wait. And yet, after this weekend set, boy does that scenario sound pretty sweet!

Thanks to a five-game losing streak, New York is ahead of Oakland by one game in the win column and 2.5 games overall. Seattle’s own collapse is the only thing saving New York from teetering on the edge of elimination. The offense has disappeared under the weight of important injury absences. The starting pitching has cratered, specifically from former Cy Young contender Luis Severino. And even the bullpen is blowing games. Where to turn…

With Aaron Judge and Gary Sanchez on the disabled list, we have gotten more Shane Robinson, Luke Voit, and Austin Romine than one would want. Sanchez had been awful this season when healthy, but Romine has fallen back to career norms after a scalding start. He is hitting just .211 since the All-Star break. And neither Robinson nor Voit have even collected a hit yet this month.

The stalwarts of the lineup, though, haven’t picked up the slack. Gleyber Torres is hitting .171 since the break and his return from injury. Greg Bird continues to struggle with full playing time. Aaron Hicks has scuffled this month as well, though he continues to get on base at a high clip.

The offense should turn it around soon, even if it doesn’t reach the heights of the first half. But the pitching has no such obvious positive regression to wait on. Bullpen pieces, like Jonathan Holder and A.J. Cole, are falling back to earth. Sonny Gray pitched himself out of the rotation. CC Sabathia can’t pitch deep into games anymore. J.A Happ was acquired and went straight to the disabled list. Even Severino, the prize jewel of the team’s pitching staff, has been absolutely horrible for a full month now.

These are all somewhat first-world baseball problems. The Yankees still have arguably the best young core in the sport. They are a team fully on the rise. They also currently have the third-best record in all of baseball even after a five-game losing streak. The sky isn’t exactly falling. However, with Boston putting together a season for the ages, it is hard to remember the positives, especially when we may have to scrape to simply get into the postseason and then fight it out in this stupid wildcard play-in game against a pitcher who has allowed the fifth-fewest base runners per game of any AL starter. What kind of reward is that for the third-best team in MLB?