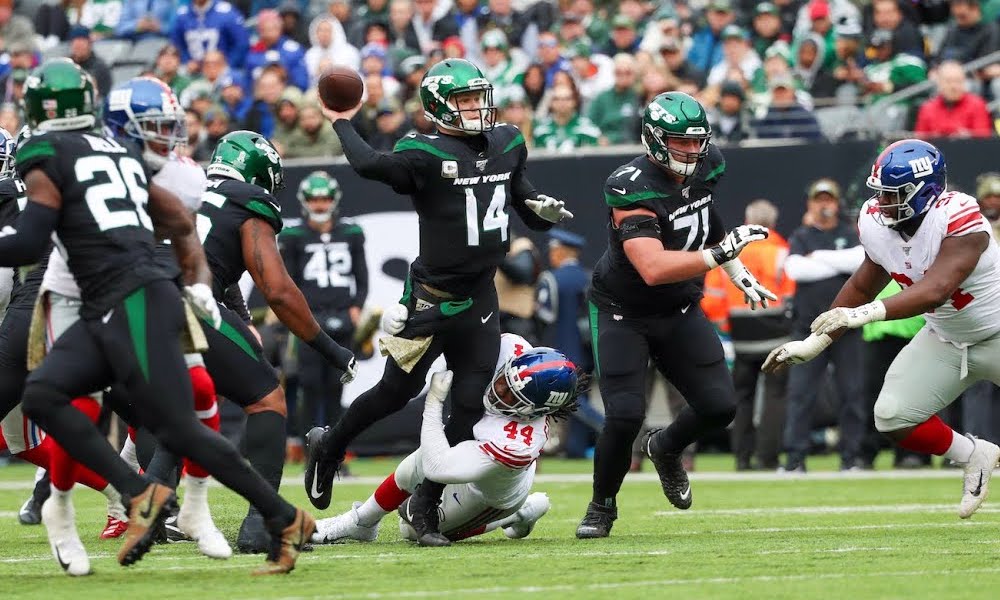 The New York Jets won the battle of ineptitude and horrible coaching, but at least they put their worst football behind them. Whoopee for something positive!

Take a deep breathe Jets’ fans, because there is a football team worse than you in New York. In the battle of ineptitude and horrible coaching, the New York Jets came from behind and defeated the New York Giants 34 – 27 in NFL Week 10. At least our worst football is now behind us. Whoopee for us.

Throughout this game, one in which we at the View From Section 323 Podcast were fortunate to be in attendance, there were actual signs of great football.  But then very quickly we were taken back to the reality that is bad football in New York.

The New York Jets jumped out to a surprising 14-0 lead and the offense, along with Sam Darnold, looked great. Darnold was completing passes to all of his wide receivers.  More importantly, there was a clear game plan by Coach Adam Gase to let him use his feet.  This offensive line is getting worse, so the fact that Coach Gase finally instilled some plays to allow Darnold to roll out of the pocket and move the line was great to see.  He made accurate throws on the run and when he was pressured, he didn’t look to make the wrong read.

Darnold still needs more time to throw, and he still needs his receivers to make catches for him, but this was a drastic improvement from what we saw the last two weeks.  How much of this is a product of a terrible New York Giants defense? We may never know, but this momentum for the Jets must continue into next week’s matchup against another terrible defense in the Washington Redskins. More fresh meat.

Also on BuzzChomp: NBA Super Teams on the ropes early in season

The Jets’ defense played great… in spurts.  Jamal Adams looked every bit of the defensive player he thinks he is, and the Jets D-line was able to generate some pressure on the quarterback. Daniel Jones’ M.O. is to turn the ball over. More times than not, if a team wins the turnover battle, then they win the game.  Gang Green did just that versus the Giants. The most impressive part of this game was the fact that the Jets defense, which has been pedestrian in the run game, only allowed 1 yard to all world running back Saquan Barkley. That’s right, one measly yard.  That in itself would have been enough of a victory.

Give credit to the coaches for continuing to make adjustments throughout the game.  This has been something that has been lacking all year.  But the Jets coaches are still making terrible decisions.  What was Gase thinking challenging two plays in the 4thquarter with just about two minutes to go? The second one was the worst challenge I have ever seen.  It just goes to show you that as good as the Jets played, they’re still lacking the leadership and the brains to steer the ship.

With all that said, the New York Jets are still the Jets. They make mistakes. They have way too many penalties which continue to put them in challenging positions like 2nd or 3rd and long.  Daniel Jones carved up the defense and the Jets seemingly didn’t have any answer for him.

Gang Green is becoming a one dimensional football team.  Jamison Crowder was on pace to have a great day, and then he was totally forgotten about. And let’s not start with Le’Veon Bell.  He’s an all world talent, but he can’t find any running room behind this awful offensive line.  Teams are beginning to think he can’t be effective, which appears true.  It will be up to this coaching staff to figure it out, or you might as well trade him.

Next up are the Washington Redskins, who just announced that rookie quarterback Dwayne Haskins will start the remainder of the season.  He’s terrible, along with his team.  The Jets need to win this game to keep this positive momentum going.  Prediction: Jets 24 – Washington 14