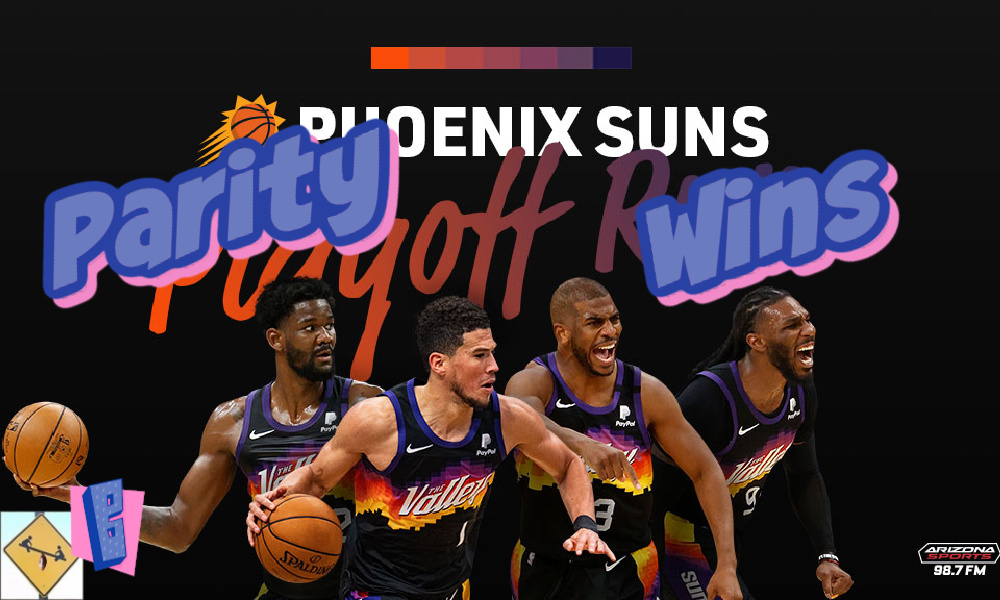 Former basement dwellers have overtaken the NBA Playoffs 2021 and hope is alive! The Suns are really good and parity is back in force. Is this a new trend, or a single season anomaly?

We are about a month deep into the NBA playoffs 2021 and have one semifinalist: the Phoenix Suns. The Suns had a great regular season, but it still feels weird that they are no longer the basement dwellers they had become in recent years. Parity is back and with it comes hope. But that’s not all. The new landscape of the Western Conference came out of nowhere. Sure, the Utah Jazz have been really good for quite a few years, but potential NBA finalists good? Not quite. Yet that’s where we are this season.

Utah and Phoenix finished 1-2 in the regular season, but few pundits thought they were the two best teams. They were wrong. Everyone just assumed the LA squads would make their way to the end regardless. Wrong once again. The Lakers succumbed to injury and couldn’t get out of round one. The Clippers are still alive in the conference semifinals, but fell down 0-2 to Utah before playing a home game. If this series follows home-court advantage, we will indeed end with Utah versus Phoenix for a trip to the finals. No one expected this, but perhaps we should have. Great teams always rise up when given time to develop.

Is this new trend of parity good or bad for the league? Television ratings for the NBA Playoffs 2021 are obviously going to suffer if neither Los Angeles team advances, but that is not quite what we mean. For the league, there is the discussion between having parity and having reliability. If this is not a single season anomaly, can the NBA truly thrive without creating both parity and reliability?

Parity in the NBA means more fan bases are in the hunt for a title. The Suns fans haven’t been in this neck of the woods in a decade. They hadn’t even earned a playoff berth in that span of time. For Utah, the team has had success, but it’s been two decades since they vied for championships. Throw in Atlanta in the Eastern Conference, and multiple new fan bases are invested late into the postseason. This is certainly good.

On the other hand, the East feels like it actually makes more sense. We have perennial conference contenders Philadelphia and Milwaukee, along with the man-made super team in Brooklyn. Those feel like more logical contenders to win the freaking NBA title. Brooklyn is only going as far as its health carries it, which is not very far as it currently appears, but the blueprint is correct. Meld together three elite players, and let them carry a franchise.

Also on BuzzChomp: How Bad are the New York Yankees?

Those are reliable options. They make it seem as though the league makes sense. If Atlanta continues to advance, or Phoenix/Utah win the ring, does it bring in any sense that this season was fluky? That the “real” contenders only lost because of condensed scheduling and smaller-sample randomness? This is what terrified the sport last year. The Lakers ended up winning, which removed any chance of an asterisk, but the 2021 season was hardly normal. In many respects, it was weirder than last year. That brings in more opportunity to say, for example, that this Phoenix squad wouldn’t be a conference finalist in a normal season. I don’t know if that’s true or not. It’s the hardest criticism to defend, one that cannot be disproven.

It’s blatantly unfair to discredit Phoenix because of the uniqueness of this season. Every team dealt with the same schedule challenges and “weirdness” as you put it. The Suns dominated through the adversity and earned the right to vie for the championship. Injuries are always fluky, so we can not blame the unique season for them. We quite often see one-off domination by a team in other sports, but rarely in the NBA. This means Phoenix is likely here to stay in the championship conversation.

What leagues like the NBA need is balance. They need balance between reliable juggernaut teams and parity. The NBA needs the Lakers, Celtics, or superstar creations a la the Nets to be great. This ensures international interest and merchandise sales. But the NBA also needs parity, so that cities like Phoenix don’t lose interest in their team entirely. Having the Suns be great this season is wonderful, even if they can’t maintain it going forward. The league needs a Phoenix or Utah every year, otherwise the hope is gone.

Parity simply means hope for teams without the finances to buy contention. MLB and NFL have it in droves, but they also have perennial winners who are normally very good. The NBA has lacked this parity for a while. How long have the New York Knicks been bad? They finally made the NBA playoffs 2021, igniting a fan base that was just waiting to be excited. With Phoenix and Utah back in serious contention, we offer more hope to teams like the Knicks who only dream of competing.

I’ve gone on and on about how parity is good, but balance is best. This is because parity truly only stretches into the conference finals for the NBA. While everyone watches the Super Bowl no matter who is playing, that championship is the exception. MLB parity stops short of the World Series and few casual fans watch without a known commodity playing. The same is true of the NBA Finals. Causal fans will watch the Nets or Clippers in the NBA Playoffs 2021 and the league wants/needs them to make the Finals. Atlanta versus Phoenix might be the worst case scenario for ratings. Those teams can simply succeed in the early rounds, but actually winning their conference tips the balance out of whack.