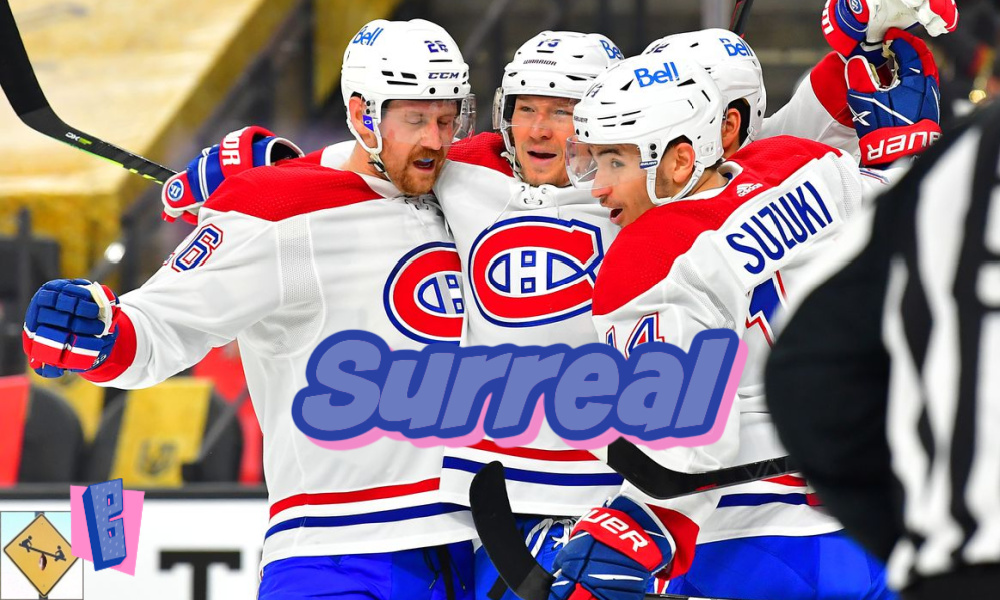 The most unlikely team faces off against the defending champions in the Stanley Cup Finals. We must celebrate the Montreal Canadiens inexplicable run to the finals, right guys?

The Montreal Canadiens are in the Stanley Cup finals this week, taking on the Tampa Bay Lightning. Tampa Bay is trying to grab the coveted repeat title, but we are focused on its opponent. In regards to Montreal making it this far, is this level of parity a perk or a negative of NHL hockey? Do we celebrate the Canadiens’ accomplishment, or snub our noses at the indignity?

The 2020-21 NHL campaign was certainly a weird year and regular season. Nevertheless, it is unavoidable to say that Montreal was not a great team during the season. In the reworked North division, the Canadiens finished fourth, the final spot warranting a playoff berth. They accumulated 59 points and a -9 goal differential in what many thought was arguably the weakest division in the new alignment. Yet here the are, in the Stanley Cup Finals. That is special, so we celebrate the Montreal Canadiens. Right guys?

Are the Montreal Canadiens Good for Hockey?

Even while tallying their points against supposed weaker competition, 59 points would have earned Montreal a playoff berth in zero other divisions. Their -9 goal differential wasn’t even a top-four mark in their very own division. This is bad.

Digging deeper, Montreal ranked 22nd in the NHL in penalty kill. Yet that is what has carried it through the postseason. The Canadiens’ current 93.5 percent penalty kill in the playoffs obviously blows away what this same team did during a much larger sample. It would also have blown away the top-ranked team’s penalty kill during the year (Vegas, at 86.8 percent). The unlikely finalist has also relied on goal prevention during even strength to carry it. Montreal’s .901 save percentage during the year has ballooned up to .934, just two hundredths behind leading Tampa Bay.

It isn’t breaking news to say that small playoff samples can show stats that don’t represent what we witnessed in the regular season, even if that wasn’t a full slate of games either this year. Essentially, Montreal is playing above its head at the perfect time and has ridden great defense and goal tending all the way to the finals. Is this a good outcome or a bad one?

On one hand, the fact that anyone can make a run to the finals is pretty refreshing. It breeds excitement and intensity. The run of an underdog isn’t normally a thing that happens in playoffs where series are played (unlike one-off contests, such as the NCAA Tournament). But even underdogs can wear out their welcome. Bringing it back to college basketball’s great postseason, an underdog’s run is great for a few rounds, but after a while, we want to see the best and most talented teams play each other. Does that feeling hold water in a professional sport where the difference between each team isn’t so large?

I’ve always been against the fluke. I like when playoffs confirm what we witnessed in larger samples. It is comforting for me to get that confirmation. Where is hockey on this spectrum? Is randomness a plus? Or would the sport be better served if it more often confirmed its larger sample of evidence?

We have to celebrate the Montreal Canadiens, because the fact that they defeated a litany of significantly better hockey teams to reach the Stanley Cup Finals is a truly great accomplishment. We love how getting into the NFL playoffs is the goal, because you can streak deep into the postseason with the perfect combination of success and luck. Making this deep playoff run is still a rare NFL accomplishment. Doing so in the NHL is infinitely harder, but the Canadiens did it. They got in, barely, and then stepped up to stifle their competition. Your philosophical questions aside, this team is special right now.

If the Montreal Canadiens manage to win the Stanley Cup and prevent the Lightning from repeating, we will likely celebrate and remember them like we do the New York Giants who vanquished the infinitely superior New England Patriots all those years ago. This is not a fluke, but a special happenstance. These NHL playoffs confirmed Tampa Bay as a great team, but also featured the special exploits of a resilient and defensively dominant Montreal team. Randomness is never a plus, but how can we call what the Canadiens are doing random? It’s unique and unlikely, but certainly not random.

Individual statistics can be random, but team success during the most important games of the season cannot be. The fact that Montreal has been ridiculously great at penalty killing and save percentage is unsustainable for a team that proved it could not do it over the regular season. Yet it’s not random for this team to play its best possible hockey when it matters most. Such things are what make sports great, especially professional sports.

As you noted, the difference between the very best and very worst professional hockey teams is small. Smart teams erase all memory of the regular season once the playoffs begin. The Montreal Canadiens did just that, but also dug deeper than anyone thought possible. As a fan of the New York Jets, it was thrilling for my team to make back to back runs to the AFC Championship all those years ago. They nearly made the Super Bowl and no one expected much of anything from them at the time. For a team like Montreal that loves hockey more than gold, this is a special moment. Perhaps they will raise the Stanley Cup, or perhaps not. Either way, I’ll be rooting for the underdog. David versus Goliath is always exciting.