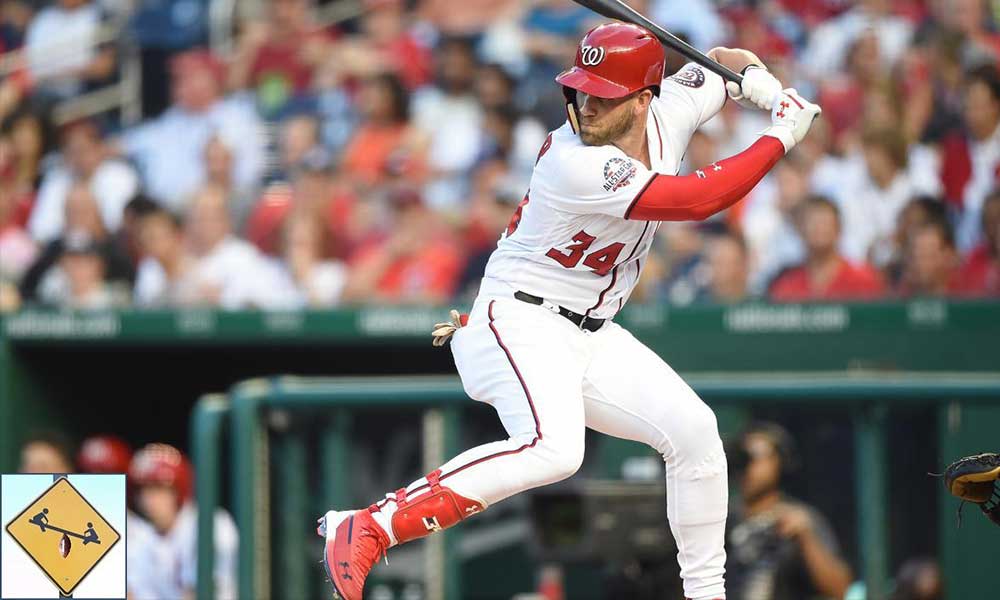 Hitting home runs is always cool, but something is missing from the Home Run Derby 2018. What happened to the fun? Is it time to overhaul the festivities?

Is this the most boring home run derby lineup you can ever remember? The league was a bit out of luck after a number of the top players (okay, all the top players) announced decisions to pass on the event, but this player pool is still unbelievably weak.

First, MLB just flat-out ignored league designations, but instead of using that to its advantage, baseball picked seven of eight participants from the worse league! And the cupboard was apparently so bare that three of these guys didn’t even make the all-star team.

Based on bWAR, the top nine position players in the sport all play in the American League. The best National Leaguer, Lorenzo Cain, ranks 10th (followed by two more AL players). If we just go by offensive WAR, since this is the home run derby we’re talking about, the top nine is still made up of entirely AL players (though a different group of nine). The five overall “best” players in the sport all publicly declined a derby invitation, as did lesser players but power draws like Giancarlo Stanton.

That puts the league in a tough spot. This event, which used to be the highlight of all sports’ all-star weekends, is turning down the same path as the slam dunk contest. No one of consequence even wants to participate anymore. Instead of turning to interesting options – like pitchers or Ichiros or what have you – MLB goes the bland route.

Bryce Harper is the only name of consequence to make the contest this season. A number of these other guys are having breakout seasons, but it would be like throwing Sixth Man of the Year contenders into the three-point shooting contest. Sure, the guys are playing well and possess the skill set, but people don’t turn out to see top substitutes. Of the group, the only player with league-wide acclaim is Freddie Freeman, and even he is a boring star.

Is this a one-season blip? Maybe it is just a coincidence that so many elite stars declined the event in the same season.

Are players finally starting to believe the derby curse? It doesn’t hold up to statistical insight, but if the player himself believes it, isn’t that enough?

Should there be an alternative event, as Mookie Betts suggested? I don’t know what that event would be, especially considering the derby is the best thing going when the top guys participate. I would even make the argument that a full field of stars in the Home Run Derby 2018 is better than if the best basketball players participated in the dunk contest.

The NFL branched out with its Pro Bowl festivities, creating dodge ball games, drone drops, obstacle courses, and other such nonsense. It was actually a fun and interesting update! Who would have thought that the NFL would be ahead of other sports in ingenuity. Now it may be baseball’s turn to update its summer break.

The derby itself is fun, regardless of who is participating, yet I can’t help but agree with you about the Home Run Derby 2018. I love to watch players hit home runs and unlike the dunk contest, the thrill of watching baseballs fly out of the ballpark is not diminished by the person hitting them. Also unlike the dunk contest, I understand why the biggest stars in baseball have taken a pass.

Don’t misunderstand, the derby would be infinitely better with Judge and Trout and the other players we picked for our Best Home Run Derby 2018 lineups. Check out the ultimate lineups and then let us know who you’d pick! We aren’t getting all the stars this year, outside of Bryce Harper, because the inevitable power slump keeps hitting players after they participate. It makes sense. Players like Aaron Judge are going all out to hit as many home runs as possible in an extremely short period of time. Hell, they are hitting as many home runs in an hour as they do over the course of 162 games. Add in the extra intensity and lack of preparation for such an exertion on your shoulders, and its no surprise to me that players are fatigued and/or hurt in the second half of seasons in which they partake in the home run derby.

MORE BUZZCHOMP: 5 Tips For Running in the Heat

Last year Judge had everything to gain from participating. It elevated his celebrity in and out of baseball and the Yankees were not serious playoff contenders at the time. Ultimately they became one and I’m sure he regretted being worse for wear so to speak. For the Home Run Derby 2018 he has nothing to gain from participating and everything to lose. This argument works in baseball, but not for the slam dunk contest. I cannot envision how dunking leads to injury. You aren’t doing THAT many dunks. You are hitting a ton of home runs.

The actual lineup for this season’s derby is full of players who have A LOT to gain from hitting a ton of home runs. Harper needed to participate because the event is in his home ballpark. Freeman can elevate his celebrity with a win or dominant performance. The other guys can make real names for themselves, at least in the short term, by capturing our attention. What is odd to me is the lack of AL participants. You’d think someone would have been a good choice, unless no one truly wanted to jeopardize their health for a playoff run due to hitting too many homers.


MLB did change up the derby, but I’m on board with adding some additional events and wrinkles to the derby itself. Judge and Trout might participate in a tug of war or a sprinting contest or something else athletic that does not strain their shoulder. Asking a player to do what he does all year and cramming it into an hour is a recipe for disaster. Only the home run derby does this and players are no longer okay with it unless the reward out weights the risk.